It’s Krishna vs Arjun, says elder brother Tej Pratap, on his tiff with Tejashwi. Rivals mock them with a ‘Dara Shikoh-Aurangzeb’ analogy. Either way, the turf is primed for battle. 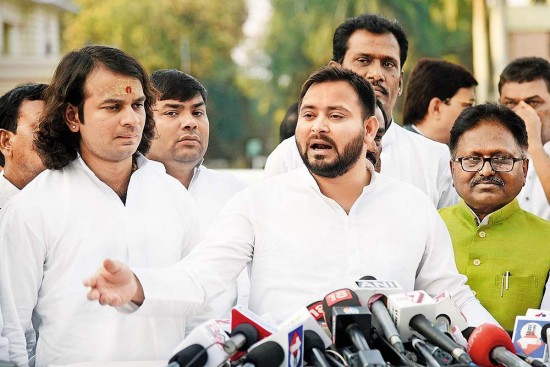 Lalu Prasad Yadav’s elder son Tej Pratap Yadav, sulking for long over his ‘neglect’ in the RJD, has raised a banner of revolt against his younger brother Tejashwi, and also accused the younger sibling’s close aides of creating differences between the two.

What had initially started off as a fight between Tej Pratap and Jagdanand Singh, the state party president, has turned into a power struggle between ‘Arjun’ and ‘Krishna’, as Tej Pratap loves to describe his younger brother and himself. Tej Pratap is now quoting Dinkar’s epic Rashmirathi, warning the Tejashwi camp to either give him “five villages” or face a Mahabharat.

Tej Pratap has been miffed with Singh, a long-time confidant of Lalu, ever since his protégé Akash Yadav was removed as president of the party students wing.

But Singh refuses to take cognisance of Tej Pratap’s outbursts, saying he is accountable to Lalu alone. “Who is Tej Pratap?” he retorted in Patna recently. It infuriated Tej Pratap further, who advised Singh to ask Lalu Prasad to find out “who is Tej Pratap?”

Singh had stopped coming to the party office for days, apparently to express his anger over repeated attacks on him by Tej Pratap, who had often accused him of running the organisation like an autocrat and even likened him to Hitler.

With Tej Pratap refusing to budge from his stand, Tejashwi sought to intervene by advising his brother to show some respect to elders and to maintain ­discipline within the party. “He is an elder brother. It is a different thing, but everybody has to maintain discipline in the party,” Tejashwi told reporters. “There could be grievances but our ­parents have given us the sanskar to show respect and honour to the elders and maintain discipline.”

This, however, prompted Tej Pratap to launch a tirade against his brother, questioning his decision to leave Bihar for Delhi at a time when the state was reeling under the havoc of floods. “He should have been in Bihar serving Bihar.”

He also blames Tejashwi’s political advisor Sanjay Yadav for creating a rift between the brothers despite claiming that no conspiracy can separate them.

Tejashwi had gone to Delhi recently to meet his sisters on Raksha Bandhan, and to join the all-party delegation led by chief minister Nitish Kumar, which met Prime Minister Narendra Modi on August 23 to press the demand for a countrywide caste census.

Even as the rivalry seems to be worsening within the RJD, political opponents are quick to hit out at Lalu’s family, Former deputy chief minister Sushil Kumar Modi says that Lalu Prasad himself did not ever follow any propriety and discipline in public life and his sons are following in his footsteps.

The senior BJP leader says that Tej Pratap’s attack on Singh is merely the outcome of the infighting in RJD. “The elder brother is hitting out at a senior leader like Singh out of sheer frustration over not getting enough importance in the party. The real target is somebody else,” he says. “Time will tell who will ultimately emerge as Dara ­Shikoh and who will rule the organisation as Aurangzeb, but the party’s health seems to be far from good.”

RJD leaders, however, hope that the warring brothers will call it a truce after the intervention of Lalu Prasad, who is currently recovering from illness at his daughter Misa Bharti’s house in Delhi. Some party leaders also believe that Tej Pratap is being instigated by vested interests who keep ­telling him that being the elder son, he should have been anointed as Lalu’s successor in the first place, not his younger brother Tejashwi.