A century after it shook the Malabar region, the character of the Mappila rebellion remains unsettled 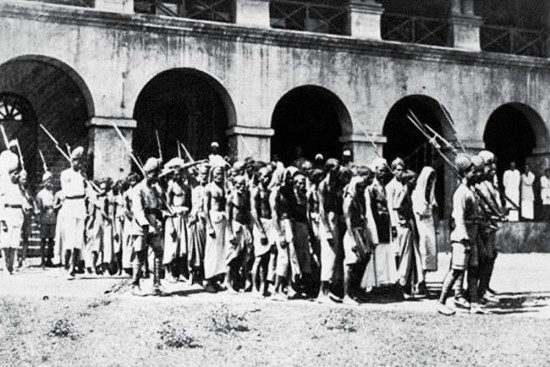 At 91, Karadan Moideen Haji’s memory is sharp and unfaltering. Born 10 years after an uprising of predominantly Muslim peasants in Kerala’s Malabar region, he recalls the abject poverty that surr­o­u­nded him in his childhood. “The 1921 uprising was against the British rulers and their laws that gave absolute ownership of land to the feudal landlords, but the condition of agricultural workers and poor peasants didn’t change even after the uprising,” says Haji. He reads out a passage from his father’s memoir on the events of August 20, 1921. On that day, a posse of policemen encircled their house to arrest Haji’s grandfather, Karadan Moideen.

A volunteer of the Khilafat movement (1919-24)—a campaign by Indian Muslims demanding restoration of the Ottoman cal­iphate, which became part of the non-cooperation movement led by the Indian National Congress—Moideen managed to evade arrest. In the following days, he witnessed bloodbath on the streets of his hometown Tirurangadi and the neighbouring areas of Malappuram, Manjeri, Perinthalmanna, Pandikkad and Tirur. On August 31, police raided the Mambaram mosque in Tirurangadi to arrest Ali Musliyar, a leader of the Khilafat movement. Haji says his grandfather was at the mosque where a large crowd had gathered. The police opened fire at Moideen and others who refused to surrender. “According to my father’s account, my grandfather took bullets in his chest and fell as a ­martyr,” says Haji. Musliyar subsequently surrendered and was arrested.

By the time the rebellion was snuffed out, around 10,000 people had been killed and some 45,000 were in jail. Known as the Moplah ­revolt in British colonial records, or as the Mappila Lahala in Malayalam, the identity and politics of its protagonists such as Haji’s grandfather foreshadow the contested terrain of historical interpretation of the uprising. While some call it an anti-­imperialist movement and agrarian revolt, its religious dimension has always attracted more debates. Now, the 1921 rebellion is back in the eye of a storm in its centenary year, with the Indian Council of Historical Research (ICHR) deciding to remove the names of 387 participants who lost their lives from The Dictionary of Martyrs of India’s Fre­e­dom Struggle (1857-1947), including prominent leaders such as Variam­ku­nnath Ahmad Haji, who was shot dead on January 20, 1922, and Musliyar, who was hanged in Coimbatore on February 17, 1922.

According to C.I. Issac, a member of the ICHR sub-committee that submitted a report on removal of the names, the Mappila rebellion was a “communal riot” and the rebels don’t deserve to be on a list of freedom fighters. “Both Musliyar and Variamkunnath were bigots. How can we include communalists and jehadists among freedom fighters? The rebels wanted to convert Hindus in the Malabar region to Islam,” says Issac, who is also a vice president of Bhartheeya Vichara Kendram.

The move to remove the names has drawn flak from many quarters, including historians and other scholars who have done extensive research on the revolt. Many contend that the uprising had many layers and shouldn’t be evaluated through a contemporary lens. However, Issac says the rebellion was led by “fanatic Muslims” and, if they had succeeded, Malabar would have become “another Pakistan”. “The rebels established Sharia courts and Hindus from the lower strata of ­society were forced to convert. Those who refused were ­brutally killed, including women and children. Their bodies were thrown into wells. I prepared the report based on archival material and evidence in the court records,” Issac says.

Historian and former ICHR chairman M.G.S. Narayanan doesn’t agree with this view. “The 1921 rebellion can’t be called a ‘communal riot’, though there was a communal angle to it. Despite the religious angle, it was against the imperialist ­government. As most of the upper-class Hindus supported the British, the leaders’ ire was directed at the Hindus too,” says Narayanan, who believes the ICHR’s move was unnecessary and without any immediate provocation.

Not unexpectedly, the row has acquired political overtones with leaders of the BJP, the CPI(M) and the Indian Union Muslim League wading into it. Senior BJP leader Ram Madhav went to the extent of calling the rebellion “the first manifestation of the Taliban mindset in India”. Pointing out that the Mappila rebels do not figure in the directory of freedom fighters published by the Kerala government in 1975 (four years after it had recognised them as freedom fighters), MoS external affairs V. Muraleedharan says, “If the Kerala government does not recognise the rebels as freedom fighters, how can they expect the ICHR to do so? The independence struggle was against the British, but what happened in 1921 was genocide. They killed poor, hapless Hindus.” According to Muraleedharan, it was all about Khilafat (caliphate) and had nothing to do with India’s independence.

This narrative has its counter. Musliyar’s 75-year-old grandson C.P. Moham­med Maulavi says his grandfather ­returned from Saudi Arabia to fight against the colonial government and strongly advocated against harming Hindus. “History shouldn’t be distorted for political gain. 1921 wasn’t a communal riot. Why would Congress leaders like K.P. Kesava Menon join the rebels if they were bigots?” he asks. “My late mother Amina and grandmother Pathumma used to share fond memories about my grandfather. He was a disciplined man. He left his wife and daughter to devote his life to the country.”

“The rebels established Sharia courts and Hindus from the lower strata of society were forced to convert. Those who refused were brutally killed.”
C.I. Issac, Member, Indian Council of Historical Research

Writing extensively on the ‘Malabar rebellion’, historian K.N. Panikkar has expounded on the interplay of economic and ­religious factors that contributed to it. According to P.P. Abdul Razak, executive council member of the Kerala Council of Historical Research, the origin of the revolt needs to be traced back to tenancy movements of the 19th century, which emerged from a context of agrarian distress. “After the British took control of Malabar in 1892, they brought in major ­structural changes in the traditional system of agriculture,” says Razak. New laws bestowed the predominantly privileged-­caste Hindu landlords with legal ownership of land, depriving the Muslim tenants and labourers of their ­customary rights. “The new laws pushed tenants into a precarious situation and abject poverty. Because of the extreme ­exploitation, the ­tenants turned against their masters, leading to rural revolts. There were 32 such ­revolts spanning the 19th century, and the process ­culminated in the 1921 Mappila ­rebellion,” says Razak.

However, by the 1920s, the character of the movement had undergone changes with other important political developments contributing to the uprising. Along with agrarian distress, the Khilafat movement and the non-cooperation movement added strength and more layers to the revolt, subduing which took the British several months. The Malabar Special Police was formed to crush the rebellion. “There are very few records on the heavy-handed approach of the British, which included imposition of martial law,” says Sreevidhya Vattarambath, a historian who has researched the aftermath of the rebellion. “Even the ‘wagon tragedy’ (67 people died of ­suffocation in a closed railway goods wagon while being taken to prison) is not highlighted much.”

“The independence struggle was against the British, but what happened in 1921 was genocide. They killed poor, hapless Hindus.”
V. Muraleedharan, MoS, External Affairs

The religious character of the rebellion and its central figures have always been a topic of debate. While there are records of forced conversions, killing of cows, desecration of temples and other atrocities by rebel leaders, scholars say the course of the revolt changed after Variamkunnath was killed and Musliyar arrested. According to Sreevidhya, there were bound to be ­deviations as the rebels lacked an organised structure. She ­divides the revolt into two phases—the first under leaders like Variamkunnath, and the second where discipline was largely missing. In fact, Mahatma Gandhi and other national leaders condemned the violence of the later phase and distanced themselves from it. “After leaders like Musliyar were arrested, there was a vacuum in the leadership. The uprising didn’t have an organised form. The Congress also needs to be blamed as it failed to understand the multi-layered complex nature of the riots,” she says.

According to Sunil P. Ilayidom, a Malayalam literature ­professor at the Sree Sankaracharya University of San­skrit, the revolt was three-dimensio­nal. “It was inspired by a ­religious ideology, but was generated from the anti-imperial struggle and the agrarian crisis. These three dimensions ­cannot be separated from each other. Religion was used as an instrument by the Mop­lah rebels to consolidate against the British. We can’t deny there were limitations and problems,” says Ilayidom.

Citing historians Panikkar and M. Gangadharan, Maulavi says the Mappila leaders, including his grandfather Musliyar and Variamkunnath, opposed forcible conversions, looting and attacks on non-Muslims. “Some rogue elements misused the revolt at one point, but Musliyar never spared such miscreants,” he says. Sreevidhya adds that lack of records from the “side of the oppressed” turns history into an “unfair game”.

(This appeared in the print edition as "Subaltern Rebels or Communal Rioters?")