Home  »  Magazine  »  National  » Covid/Congress »  Gandhi Siblings Fire At BJP Over Lockdown Issues But Is That Enough For A Congress Comeback?

Gandhi Siblings Fire At BJP Over Lockdown Issues But Is That Enough For A Congress Comeback? 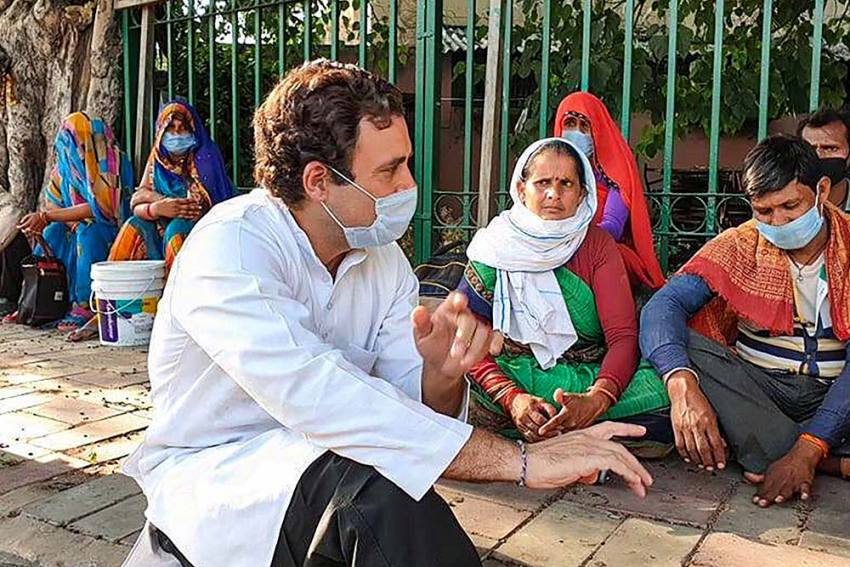 Rahul Gandhi interacts with migrant labourers
Photograph by PTI
Puneet Nicholas Yadav May 29, 2020 00:00 IST Gandhi Siblings Fire At BJP Over Lockdown Issues But Is That Enough For A Congress Comeback? 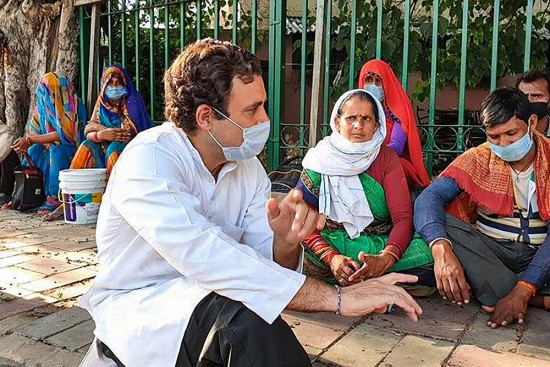 “Let us hope this isn’t another transient hobby to pass the otherwise dull hours of the lockdown,” says a senior Congress leader, referring to the vociferous interventions made by Rahul Gandhi and Priyanka Gandhi Vadra over the past two months on various issues linked to the COVID-19 pandemic and nationwide lockdown. This period has seen Rahul address three pressers and promise more. He has also started an ‘in conversation’ series on social media platforms featuring experts and common citizens. He ventured out to directly interact with migrant workers forced to return to their native villages for lack of jobs, money and food. Presented as constructive suggestions rather than political criticism, Rahul’s potshots at the Centre, over its alleged mishandling of the health, economic and humanitarian crises in the wake of COVID-19 have continued unabated on Twitter.

While Rahul has been vocal about the big national picture, Priyanka has been focused on Uttar Pradesh, where she is in charge as a Congress general secretary. She extended a cooperative hand to the Yogi Adityanath government for bringing back migrant workers from other states in buses sponsored by the Congress. The offer, though, was spurned and her close associates, including personal secretary Sandeep Singh and state Congress chief Ajay Kumar Lallu, were booked for allegedly forging the registration numbers of the buses she promised.

Since the Congress’s drubbing in the Lok Sabha polls last year, the Gandhi siblings had rarely exercised their vocal chords with such alacrity and persistence for a public cause—barring a few speeches during assembly poll campaigns and protests against the Citizenship (Amendment) Act. Now, the two have found their own interpretation of the prime minister’s call for being ‘local ke liye vocal’. While Narendra Modi asked Indians to speak up for locally made products, Rahul and Priyanka have made it clear that they prefer to speak out for India’s voiceless locals such as migrant workers and others worst hit during the lockdown.

Congress media cell chief Randeep Surjewala insists “no politics should be seen in the actions” of Rahul and Priyanka, and that the duo has “always spoken for the national and public interest”, but the political messaging this time is unambiguous—that the Gandhi siblings have taken up cudgels for migrant workers and the poor even as the BJP-led Centre continues to gloss over the hardships faced by this mass of humanity. The Wayanad MP’s demand for direct cash transfer of Rs 7,500 and free distribution of 10 kg of food grains to every household excluded from the income tax bracket, both for a period of six months, was recently backed by leaders of 22 opposition parties in an online meeting called by interim Congress president Sonia Gandhi. 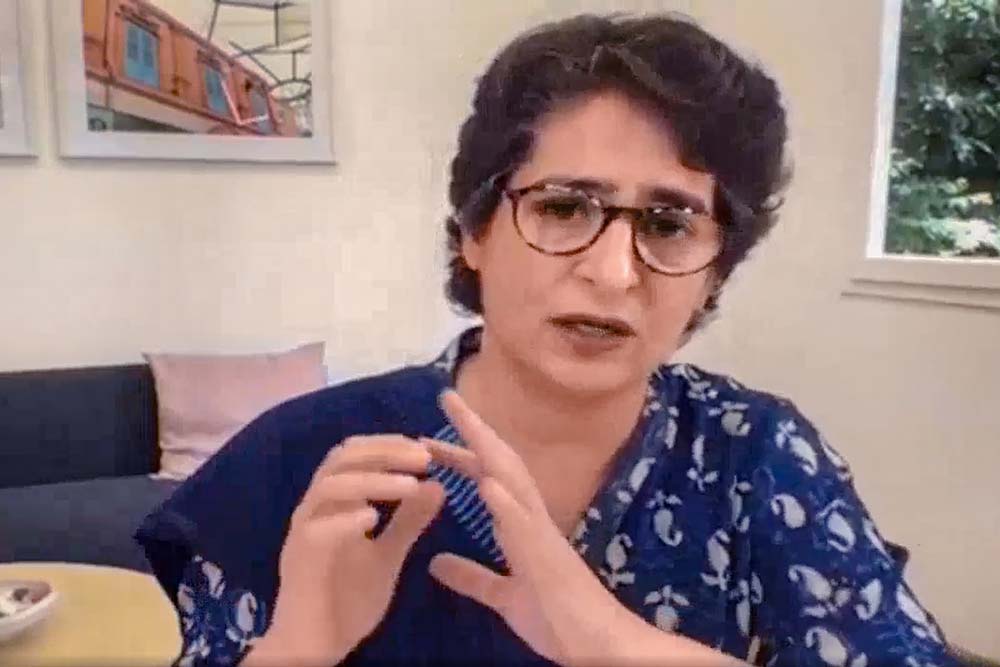 For the electorally beleaguered Grand Old Party that was, until recently, unable to articulate its stand on politically sensitive issues and was often embarrassed by its leaders publicly airing divergent views, Rahul and Priyanka seem to have provided a simple narrative that is hard to criticise—that “the poor need immediate help”. And, within this narrative, migrant workers have primacy of place. “No political party has ever treated migrant workers as a composite vote bank,” says political analyst Prof Badri Narayan. “In the current situation, this community is united by suffering and it appears that the Congress wants to rebuild itself by reaching out to this mass, which incidentally has a significant presence in Hindi heartland states like Uttar Pradesh and Bihar, where the party is the weakest. Rahul and Priyanka can improve their party’s position by recasting the old ‘garibi hatao’ (remove poverty) politics in a ‘pravasi bachao’ (save the migrants) narrative.”

“If we have no cadre and no leaders, who will Priyanka or Rahul rely on to mobilise support?” asks a former Congress MP.

The bus row also drew flak from Bahujan Samaj Party supremo Mayawati and Akhilesh Yadav’s Samajwadi Party—‘secular’ outfits with which the Congress wanted a grand alliance just a year ago. Narayan says the sharp criticism from the BSP and SP indicates growing political insecurity among the two dominant regional parties of Uttar Pradesh. “By pitting herself directly against Adityanath when both Mayawati and Akhilesh were silent on the crisis, Priyanka has already scored a political point. The Congress is trying to effect a shift in politics by appealing to migrants as a whole. If this strategy works, the reliance on multiple strategies to appeal to Dalits, OBCs, Muslims or adivasis will be reduced. The BSP and SP will certainly be worried if migrants rise above the Dalit-ST-OBC divide to vote en masse,” adds Narayan.

While all this sounds like sound political strategy for the Congress, party leaders are cautious about predicting the implications of this new experiment by the Gandhi siblings. “As of now it appears that we are the only party taking on the BJP over its mishandling of the crisis, but the impact of what we are doing right now can be assessed only when normalcy is restored,” says a Congress functionary. “Press conferences, interaction with experts and social media activity are no substitute for real grassroots politics and that is where the Congress loses out.”

Many in the party feel both Rahul and Priyanka will have to lead a sustained campaign on the ground to extract maximum electoral returns from the “clear articulation of a strategy for the poor and for the period after the lockdown”. “You cannot afford to go off on a vacation the moment international flights are resumed,” says a former MP, one of those who wonder whether Rahul’s ongoing interventions are a “transient hobby”. Priyanka too will “have to be more visible, accessible and vocal” in Uttar Pradesh, he adds, because “the state still has no cadre to work for the party in the assembly polls” due early 2022.

“Once Priyanka takes up a challenge, she does not abandon it. Her responsibility is to revive the party in Uttar Pradesh and she has been working at it with complete dedication,” says Aradhana ‘Mona’ Misra, Congress legislature party leader in the UP assembly. “Our commitment is to the people of Uttar Pradesh and we will not let them down.”

Many Congress old-timers, however, feel Priyanka is making the same mistakes in Uttar Pradesh that Rahul has previously been criticised for. “Ever since she took charge of UP, loyal partymen who have worked for decades have been sidelined,” says a UP Congress leader. “She disbanded the district committees after the Lok Sabha results and later sidelined many seniors to appoint her own nominees. Also, anyone who wishes to meet Priyanka has to first win over her personal secretary (Sandeep Singh). We faced the same problem with Rahul when everyone had to go through Kanishka Singh (Rahul’s secretary till 2014) or other non-political members of his coterie.” Complaints against Sandeep Singh’s behaviour with Congress workers in the state are aplenty. Singh, a former JNU students union president who was with the left-wing AISA during his varsity days, had joined Rahul’s team in 2018 and was later moved to Priyanka’s office.

Party leaders insist that the Gandhi siblings must use the lockdown period to work on a strategy to rebuild the cadre in states where the party has been pushed to the fringes; particularly in UP where Priyanka hopes to lead the Congress in the 2022 assembly polls without allying with a regional party. “There is no doubt that the humanitarian crisis caused by the lockdown has given us a plank for revival, but if we have no cadre and no leaders, what will Rahul or Priyanka do when things get back to normal? Who will they rely on to mobilise support?” asks another former Congress MP.