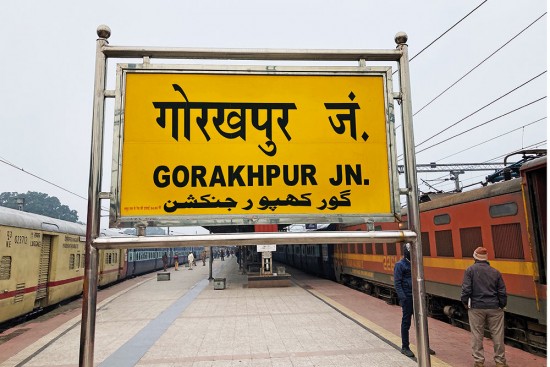 She was not keen on revealing her identity beyond saying that she is a student at the Banaras Hindu Uni­versity. But when asked about the forthcoming assembly elections in Uttar Pradesh, she had a prompt reply. “I am not very interested in politics so I cannot say much about leaders…I will vote for whoever my family votes for,” the 27-­year-old student told Outlook at the Gorakhnath Tem­ple, where she had offered prayers. Outside Gorakhpur railway station, long-time newspaper vendor Amarnath Gupta also didn’t have to think much before answering that women generally follow their fam­ily’s lead while deciding to vote, as they don’t want any discord within the house over politics. The two answers might not be representative of what women voters of the state think, but they do provide an insight into the political drama unfolding in India’s most populous and politically crucial state.

It was in Gorakhpur where the BJP pulled out its ace in 2017 when it propped up a saffron-clad monk to head the state after a convincing win in the assembly polls. Five years later, Yogi Adityanath—once the head priest of the temple and the incumbent chief minister—is all set to defend his crown in the face of a spirited challenge by the Samajwadi Party (SP), apart from the Congress and other parties. The Congress, especially, has set the cat among the pigeons by dec­iding to field 40 per cent women in the seats it is contesting. It might not be enough for the grand old party to see any change in its fortunes, but the gambit by Priyanka Gandhi is seen as a big push for identity politics surrounding women.

Out of the state’s 150 million voters, nearly 69.8 million are women, according to latest Election Commission data. Though women have historically played a much smaller role than men in elections, their participation has increased over the years. In the 2017 assembly polls, women’s turnout stood at 63 per cent, higher than men at 59 per cent. It was a trend which started in 2012, when around 60 per cent of the women had come out to vote, compared to 58.68 per cent of the men. Against this backdrop comes the Congress’ high-pitched campaign woven around the women voters, “Ladki hoon, lad sakti hoon (I’m a girl, I can fight). But will it help women have more say in politics? Banaras Hindu University professor Pratima Gond said there was a caveat. 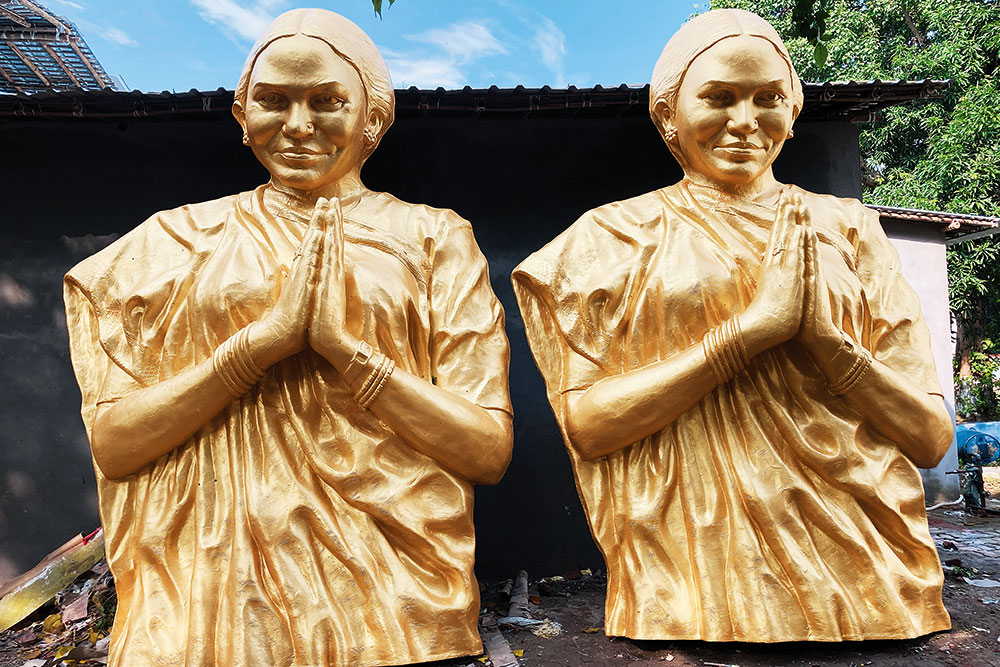 “This new development in politics, where there’s poten­tial transfer of power, will mainly benefit elite women. I’m not defining ‘elite’ solely by caste. For example, I’m an ST, but I can be considered elite as I’m a professor. This new political development benefits women who are already established,” Gond said. “But there’s still no discussion on issues of women vendors who sell their wares on footpaths and small stalls, and don’t even have access to a washroom…If you are unable to provide health, education and empl­o­yment to women and keep harping on (Ram) tem­ple construction, women will continue to be sidelined in tra­ditional families, where husbands and sons take the decisions. Even in politics, their strings would remain in men’s hands.”

Gond’s views found corroboration from Amrita Dubey, who was selling colourful earthen flower pots under the government’s ‘One District One Product’ scheme at a mela at the temple. “Currently women do not play a decisive role in politics…they have to find their way. When I was run­ning around to establish my start-up, I would only meet men, there were hardly any women. If more women gain employment, there would be more women on the streets. Right now, only women who have a family background in politics are able to engage in active politics,” she said.

As women emerged as an attractive constituency, it’s no wonder that all parties are wooing this sizeable vote bank—from SP promising an annual pension of Rs 18,000 each to all women, to BSP pledging to ensure 50 per cent reservation in politics and government jobs to the Congress putting all its bets on women voters. The BJP is not far behind, with PM Narendra Modi and Yogi Adityanath rep­eatedly saying that women have been offered both rig­hts and security under the BJP government. Dubey, for one, agrees. “CM Yogi Adityanath has provided women with a feeling of security to some extent, along with employment opportunities. Police patrolling has increased on the roads,” she said. She was, however, quick to add that crimes against women continued in the state. “Much still needs to be done to ensure that girls feel safe. While voting, women remember who can help them feel safe and ensure their pro­gress.” For the record, of the 31,000 complaints rec­eived by the National Commission for Women in 2021, over half (15,828) are from Uttar Pradesh. The largest chunk of the complaints was linked to domestic violence. In many of the­se cases, the accused was a close relative or acquaintance of the woman. No political party has picked up this key issue, and domestic violence remains absent from the electoral discourse, along with providing safe spaces to women. 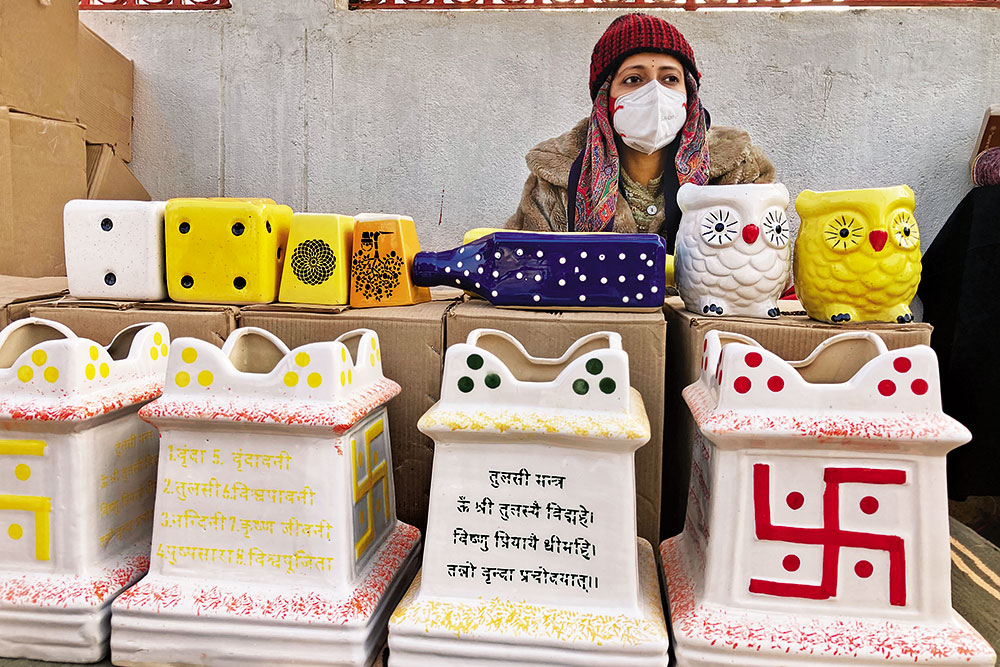 Amrita Dubey at her stall in Gorakhpur.

Rajni Devi, 40, the Congress candidate from Gorakhpur’s Khajni constituency, said women and girls can progress only if they are allowed to make their own decisions, both in politics and their own lives. A stage performer known as ‘Khajni ki Rajni’ (Rajni from Khajni), she is among the surprise candidates fielded by the party. And she also questioned why her character is judged but not the men who come to her shows. “If Narendra Modi can become the prime minister after selling tea, why cannot an orchestra dancer move forward in politics?” she asked. “As far as safety is concerned, women have never been safe, and if things continue as they are, we would never be safe.”

A recent incident has brought back the spotlight on women’s safety and dignity in the state. In a viral audio clip UP minister Swati Singh was purportedly heard making allegations of violence against her husband, also a BJP minister. She had entered politics precisely on the plank of women’s dignity. At Gorakhnath Temple, Aka­nksha Bharti, 28, made the same point. Visiting the temple with other women from her family, Bharti said she had no interest in politics as it did not “affect my life”. But on the question of security, she said  if girls are given confidence by their family, it becomes easier for them to fight the challenges outside. “There should also be a discussion on women’s conditions within their houses,” she added.

(This appeared in the print edition as "Her Vote, Her Story")