High On Hope: The Widening Gap Between Aspiration And Job Opportunity

On the eve of polls, educated Purvanchal youth are in a bind – whether to vote for caste and creed or choose job security by sacrificing their core convictions 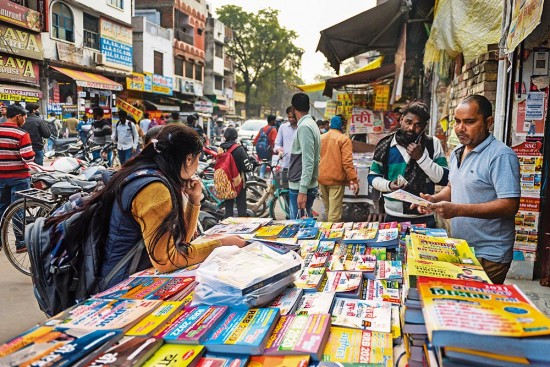 Small rooms surrounded by silhouettes of preparatory books for competitive exams—sun­light never reached these corners—unwas­hed dishes stacked outside the doors, toilets with witty lines scratched on their doors, like “flush pro­­perly, you are in the toilet, not the field”. A slice of life in a “voluntary jail”. That’s the life of students aspiring for government jobs, and with it, a secure life, a pretty bride, and of course hefty dowry—with anxiety of failure looming in the background.

In cities like Prayagraj, Varanasi, Ghazipur, Gor­akhpur and Azamgarh of Uttar Pradesh, throngs of students from lower-middle class families with dreams of cracking competitive exams conducted by the Indian Railways, school service commission (SSC) and other UP state government exams, are an unforgettable sight. The sheer number of students aspiring for government jobs on the streets, libraries, private hostels and bookstores around Allahabad University draw a melancholic image of new age unemployment among educated youths. Aspirants struggle to pay their monthly expenses, but the dream of getting a government job somehow keeps the spirits high.

Dharmendra Sahu (28) from Kunda Pratapgarh has been preparing for government jobs by living in Prayagraj for the last five years. Like all other aspirants, he does all the chores from washing clothes to cooking food in his 8x8 hole-in-the-wall pad. He shares his monthly room rent of Rs 2,800 with a roommate, yet his overall monthly expenses go up to Rs 4,000, which his family has to bear. “My father is a farmer and I couldn’t afford engineering or any other professional courses. So I decided to prepare for government jobs, for the security they offer,” he tells Outlook.

Covid-19 has exacerbated the situation. Aspirants say that exam delays due to irregularities and paper leaks are normal, but with Covid, the government found a reason to not conduct the exams at all. “Students from well-off families pursue enginee­r­ing and medicine in big cities. We can’t afford these expe­nsive courses, so we pursue BA and MA in general disciplines and prepare for government jobs,” says Sunil Keserwani (23). “We’re agitated, we just want them to conduct exams on time.” Kes­erwani adds: “Due to Covid-19, students who used to offer tuitions to younger kids, lost their means to meet their expenses. Some even returned home.” 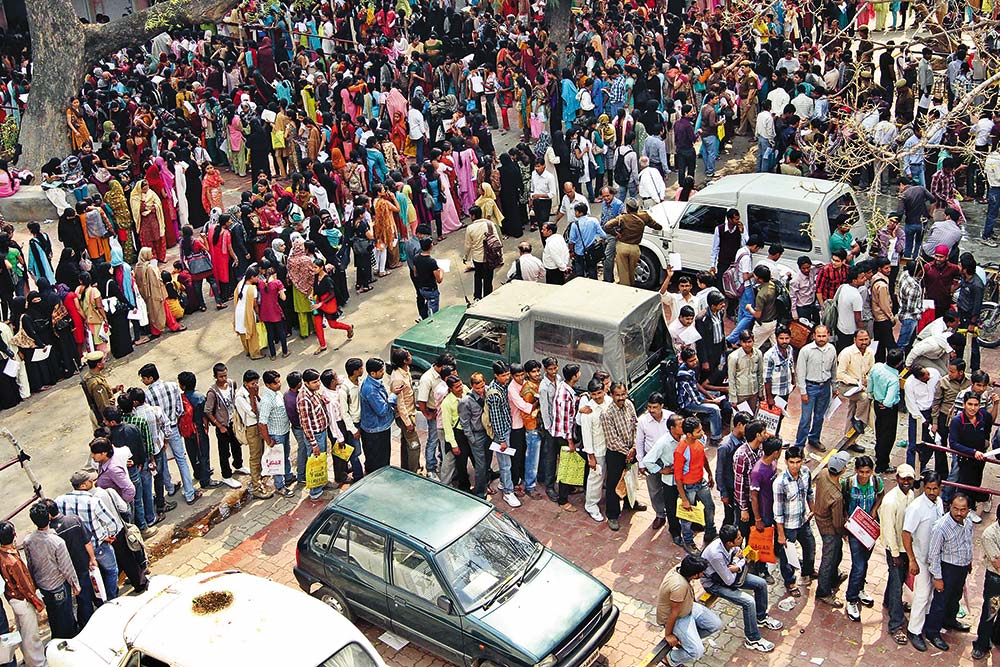 Outlook spoke with several students in UP’s Purvanchal and found that government job aspirants sit for all the exams. They are ready to take any job—even ones involving manual labour—as long as it’s a secure, government one. Pras­h­ant Yadav (25), who has completed BA, MA and LLB, is now pursuing BEd as it could help him land a teaching job at a government school. He sits for all the competitive exams for government jobs, but his aim is to crack the civil servi­ces. On why he accumulated so many degrees, he says, “Everyone can’t crack the civil services exam, which keep on getting delayed, so I tho­ught I should do something instead of sitting idle. Now, I just want a government job.”

An instructor at a private coaching centre, on condition of anonymity, says, “You allow election rallies attended by lakhs of people, but when we conduct classes, you raid us and file cases, because you think if students get educated, they won’t vote for you.”

He adds that unemployment frustration in UP and Bihar is huge. “Those who can afford to go to Delhi to prepare for competitive exams, do so. Of course it means this person is at least a graduate and can afford to pay upwards of Rs 8,000 a month. That’s not the case here. Aspi­ra­nts from Bihar and UP are ready to accept just about any government job.”

Talking to the students, one is reminded of Tigmanshu Dhulia’s 2003 film Haasil, also set in Prayagraj, in which the familiar sight of hooliganism in student politics and mofussil aspirations played out—spreading from unive­rsity campus, Civil Lines, Bagada and Salori, to all over India. There’s some difference though­—­far from the carefree swagger of the past, tod­ay’s students seem to bear unseen burdens on their shoulders—of anxiety, frustration and desperation for job security. 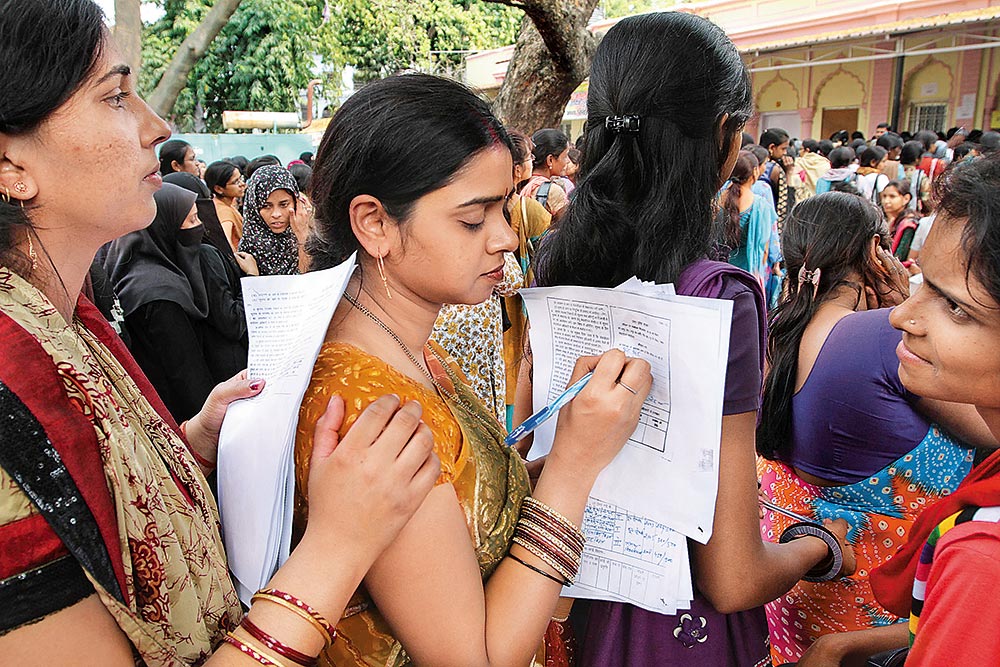 A protest against the Railway Recruitment Board (RRB) has been going on since last mon­th. It’s more visible in Purvanchal, covering the larger Awadhi and Bhojpuri regions of UP. Nat­urally, Prayagraj is in the news.

On January 14, RRB announced results for the non-technical popular categories (NTPC) exam. It selected fewer candidates than it had promised, and the reason it gave was a high cut-off. RRB featured a single candidate for multiple posts. With the exam already delayed by three years, and overall uncertainty due to repeated delays and paper leaks in other exams, the frustration spilled into the streets.

Protests by students in Bihar and UP led to widespread vandalism of public property, inc­luding in Prayagraj. Visuals of police ent­ering hostel rooms to beat students went viral. An FIR was also registered against thousands of unnamed students, along with three—Rajesh Sachan, Mukesh Yadav and Pradeep Kumar—who were identified.

Some injured students claimed they were bea­ten up by police even though they had not taken part in the protests. “I was studying in my room, when cops entered our hostel. They didn’t spare anyone. Whoever they saw, they beat up,” says Dharmendra Sahu. 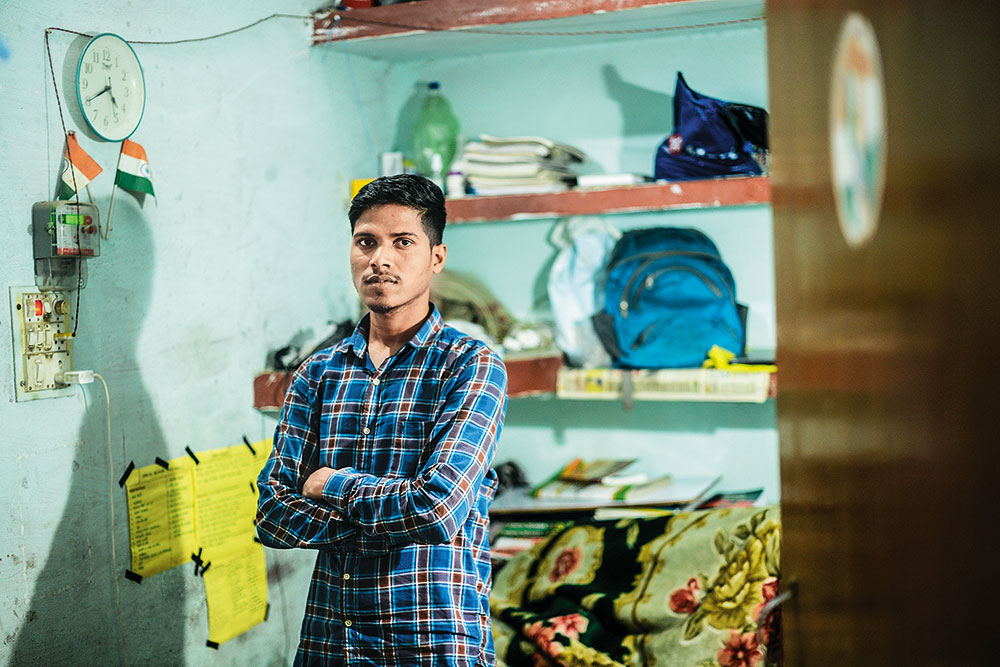 Sahu does not deny the involvement of anti-soc­ial elements in the protest. But he also beli­eves police beat up stude­nts indiscriminately. “It doesn’t work that way. We have the right to protest. And in fact, I didn’t even protest, yet I got beaten up”.  He adds, “What was our crime? We were studying in our room when the cops entered and broke windows and gates.”

RRB NTPC notified 35,281 vacancies and sold 1.25 crore forms for the exam, of which around 18.1 lakh were sold in the Allahabad zone itself. There were 13 posts announced—the qualification for some of which was Class XII pass, while for the rest it was graduation—and a single exam was conducted for all the jobs.

Bholu Yadav, another aspirant, says, “These are Group D jobs. We’ll be tightening nuts and bolts. For that too, you are taking exams in two parts—CBT-1 and CBT-2. Isn’t it ironic? In Ind­ia, one exam takes over two years to complete—from notification to joining—and that too, und­er ideal conditions, which usually don’t exist. Isn’t that a waste of our time?” 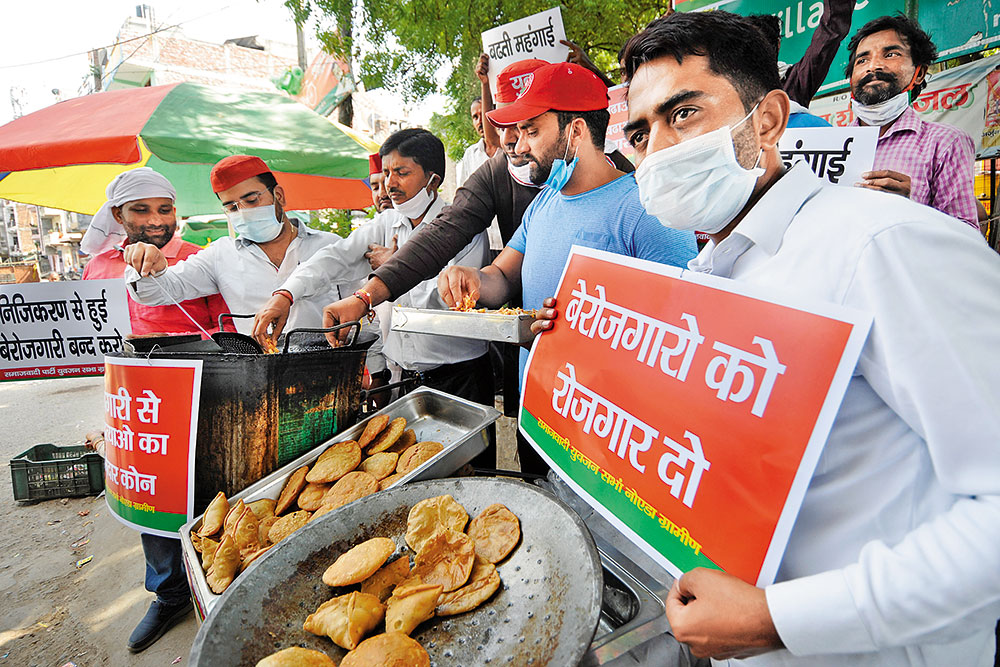 Unemployment is one of the biggest crises in India. As per a response by the Union ministry of labour and employment, to a question asked by Rahul Gandhi in Parl­ia­ment in March 2020, there were over 27.11 lakh job-seekers who registered in 2017 in UP alone. In July 2021, UP state minister of micro, small and medium enterprises (MSME) Siddharth Nath Singh had said the UP government had provided 2.64 crore jobs to people.

In India, one exam takes over two years to complete—from notification to joining—and that too, under ideal conditions, which usually don’t exist. Isn’t that a waste of our time?
Bholu Yadav, An aspirant

In 2018, at least 93,000 aspirants applied for a peon’s job in UP, including 3,700 PhDs. Professor Ravi Srivastava, director of the Centre for Employment Studies at the Institute for Human Development, tells Outlook, “These claims by the government are not backed up with data. Gove­r­n­ments are unwilling to even accept that unemployment exists.”

In UP, job announcements and elections are int­erlinked. RRB had announced the NTPC vac­ancies in February 2019, just before the Lok Sab­ha elections. Afterwards, it was put on the backburner. Twice in 2021, protests broke out online, but they didn’t become a poll issue. This time too, aspirants in at least three districts—Pra­yagraj, Varanasi and Gorakhpur—say it is not going to deepen anti-incumbency or reflect in the ballot box.

Opposition leaders Akhilesh Yadav and Priyanka Gandhi did speak up for the students, but it didn’t augur well. SP promised 22 lakh jobs in the IT sector, while Congress promised 20 lakh jobs and aid to entrepreneurs. But students, especially in these three districts—think these are empty promises.

Effectively, in eastern UP, unemployment has failed to blur other fault lines—of caste, religion and especially their perception of how a leader should be. Some people also app­ear more conc­erned about national issues than local ones, and show a willingness to cast their vote on these.

Suraj Bind (23), who has an ITI diploma and sells jhalmuri on the streets, says, “Everyone is suffering, but Modi is bringing praise and pride for this country.” Across these areas, we spoke with several others who also bel­ieved that desp­ite the unemployment, BJP—led by Modi and Yogi—is doing well for the nation’s pride.

Jaspal Bhatti, a doyen of Indian satirical comedy, had done a lot of shows on unemployment. His song, “Jo dar dar dhundhte service (Those who struggle to find a job)” epitomised the job crisis in the India of the 1980s. Since then, job crisis among educated youth has been a chall­enge for every government. The frequency of protests has now increased—mostly led by government job aspirants. Online protests with hashtags like #speakupforSSCRailwaystudent, #RRBExamDates, #StudentLives­Matter and #SSCreforms, with millions of posts in support, have become frequent.  On September 9, 2020, aspirants switched off lights, lit diyas and shared these pictures with the hashtag #9Baje9Minute. Songs by Bhojpuri stars and posts by social media influencers on these competitive exams have repeatedly gone viral. This time around too, songs like “Ho gai ni barbad NTPC ke chakkar me (We’re ruined by the NTPC exam)” are going viral along with sarcastic mem­es, though, how far they will impact polls is yet to be seen.