The death of Syed Ali Shah Geelani is not the end of Hurriyat, but it will continue to be alive because it is a sentiment rooted in Kashmir’s collective soul, says co-founder Abdul Gani Bhat 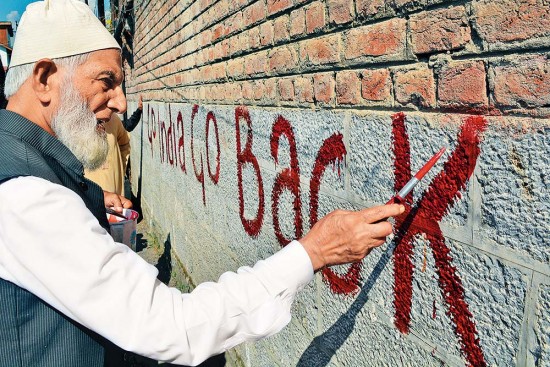 Unlike the houses of other ‘pro-freedom’ leaders in Kashmir, Prof Abdul Gani Bhat’s residence in Srinagar’s uptown Jawaharnagar area has no guards at the entrance. In a crowded room inside, the ailing Hurriyat Conference co-founder is talking about geopolitical changes in the region and their impact on Kashmir. He says Hurriyat (named after the Arabic word for ‘freedom’) outlived Article 370 and won’t be out of circulation in the absence of 92-year-old leader Syed Ali Shah Geelani (in pic), who died on September 1 after spending most of the past 11 years under house arrest. “Hurriyat is not like a building that catches fire and is gone. It is a sentiment deeply rooted in Kashmir’s collective soul,” says Bhat. “A political group that chose to represent the soul cannot be wished away. I may die tomorrow and another leader the day after, but Hurriyat is a symbol, it will live on. Symbols never perish.”

The last time Bhat met Geelani, also called ‘Bab’ (‘beloved father’, in ­Kashmiri) by many in the community, was sometime in 2003-04, “when ­Pervez Musharraf was president of Pakistan”, he says. “Then we chose different political paths and never met again.” Ten years earlier, Geelani and Bhat were on the Hurriyat ­Confer­ence’s seven-member ­executive when the conglomerate of ‘pro-freedom’ organisations was founded in 1993. Geelani had then proposed Bhat’s name for chairman, but 10 years later, he parted ways with the Hurriyat Conference, floated his own party, Tehreek-e-Hurriyat, and formed another Hurriyat faction with the support of other groups. In ­January 2004, ‘moderate’ Mirwaiz Umar Farooq led the Hurriyat ­executive—Bhat, Bilal Gani Lone, Moulana Abbas Ansari and Fazal Haque Qureshi—for dialogue with then deputy PM L.K. Advani. “When you choose to talk, you establish your existence as an organis­ation for years to come,” Bhat says.

Mainstream politicians do not share Bhat’s optimism about Hurriyat. With Mirwaiz under house arrest and Jammu Kashmir Liberation Front chairman Yasin Malik in Delhi’s Tihar jail, the ‘pro-freedom’ spectrum has almost disappeared from the political landscape. “They (the government) resurrected Geelani from his grave,” says a senior politician, who doesn’t want to be identified. After Geelani’s death, police raided the nonage­narian’s residence and took away his body, allegedly dragging it on the floor. The police had brought no stretcher, claim Geelani’s kin, who also allege they were beaten up. “The way they treated Geelani’s body has been etched in the collective memory of Kashmiris,” says another politician, who requests not to be named.

Bhat insists “silence in Kashmir” since the abrogation of Article 370 doesn’t make “Hurriyat or the people of Kashmir irrelevant”. “Discretion is the better part of valour,” he says. “We always support dialogue among India, Pakistan and the relevant political grouping in J&K called All Parties Hurriyat Conference. The problem in Kabul has been resolved, and India and Pakistan can take the lead and resolve their problems, including the core problem of Kashmir.”

(This appeared in the print edition as "With or Without Bab")