The entry of Ashwini Vaishnaw into Modi’s cabinet got a lot of notice, but nowhere more so than in Odisha. Does it mean a thumbs-down for Dharmendra Pradhan? Not quite. 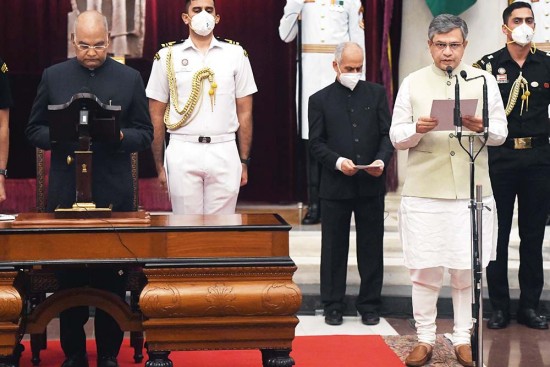 The biggest takeaway for the BJP’s Odisha unit in the recent reshuffle of the Narendra Modi government is the elevation of Ashwini Vaishnaw (in pic), a first-time MP and political greenhorn, as a cabinet minister with the important portfolios of railways and IT. That PM Modi chose Vaishnaw, the lone BJP Rajya Sabha MP from the state, over much stronger claimants from among the seven Lok Sabha MPs (the eighth, Pratap Sarangi, lost out in the reshuffle sweepstakes) for a berth in the cabinet, in itself, carried a message. It is obvious that the former IAS officer was preferred for his proven efficiency both in the public and private sector rather than because he is an MP from Odisha.

Ordinarily, Vaishnaw’s elevation would have been seen as the clipping of the wings of Dharmendra Pradhan, the new education minister and the BJP’s face in Odisha since 2014, as it would create an alternative power centre in the state unit. The fact that the petroleum ministry, which had been with Pradhan since Modi took over as PM in 2014, was taken away from him might have reinforced such an impression. But that is not quite the way it is being interpreted in political circles in the state. Most observers feel Pradhan remains the unquestioned ­numero uno in the party as Vaishnaw has never really been part of the Odisha BJP. In fact, some analysts see Pradhan’s invisible hand in the former bureaucrat’s induction as a way to checkmate the ­latter’s IAS batchmate and Bhubaneswar MP Aparajita Sarangi, a strong aspirant for a ministerial berth. At a time when public anger is at its peak over petrol prices breaching the Rs 100 mark, divesting Pradhan of the ­petroleum ministry is being seen as a way of saving him from public wrath. In any case, he has got two important portfolios—education and skill development—where there is plenty of scope for him to show his mettle in the days ahead.