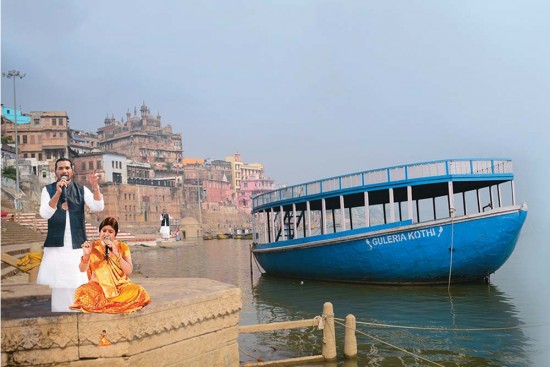 In the alleys of Varanasi’s Thatheri Bazaar, four men huddle to discuss the politics of the times on a November afternoon. Every­thing—from abrogation of Article 370 in Kas­h­mir to student protests in universities to inflation—is on the agenda.

The discussion is heated. “What the BJP government has managed to do in the last seven years, did not happen in the last 70. Why is the taxpayer’s money being used on students who go to colleges only for sloganeering? Why must Kashmiris be offered special provisions if they are a part of the country?” they ask.

A short walk away at Guleria Ghat, the teachings of 15th century Sufi saint Kabir are being celebrated at the Mahindra Kabira Festival (November 26-28).

Musicians sing of notions of unity and selflessness that Kabir’s nirgun bhakti upheld, and of his writings against organised religion.

(Hindus claim Ram as theirs,
Muslims claim Rahim
They fight and kill in their names,
but their knowledge is hollow),” sing members of the Dastaan Live art-rock project at the two-day annual festival.

For over 400 years, Kabir has been synonymous with the essence of the holy city of Varanasi, where he was born. He is said to have grown up in a place that has come to be known as the Kabir Chaura.

For a long time, this city has harboured Hin­dus and Muslims in harmony. It is in this city where Kabir preached nirgun bhakti, refusing to align himself with any religion. He spoke of worshipping the formless, and a faith that was driven by a sense of oneness and community, and was devoid of any desires of personal gain.

(All are mine, I belong to all,
There is no other),” says Kabir.

How relevant then are his teachings, particularly at a time when the country is frequently witnessing incidents of communal and caste-based strife, when the race to be successful at the cost of fellow beings has become the norm?

“Kabir’s is poetry that’s very contemporary… that’s why it is classic. Kabir has said that your own body can house an entire galaxy, we don’t need a temple or a mosque. In the contemporary world, that realisation is missing. And I think Kabir shows us a path,” says renowned theatre artist M.K. Raina.

The philisophy of Kabir is simple, subtle and impacts you dire­ctly. He says everything straightforward. He talks of being polite to others, being kind to the weak.

The Mahindra Kabira Festival celebrates this guiding light that Kabir has left as his legacy for his followers to conform.

Organised along the banks of the Ganga river on Guleria Ghat, the annual event brings to life the Sufi saint’s words through classical, folk and Indie music. Seminars and heritage walks are also part of the festival experience.

Raina directed the rock-opera titled, “Kabira Khada Bazaar Mein” that was performed at the festival by Dastaan Live.

In Varanasi, on the face of it, temples and mosques coexist on the banks of the Ganga… shop signboards like “Ram Rahim Gadda House”, “Ram Rahim Cold Drinks” are a common fixture. But chatter on the ground tells a different story.

The opinion—which seems apparent in the discussion among the men at Thatheri Bazaar—finds confirmation in Jaitpura, a Muslim-dominated locality. “It’s not that Hindus and Muslims are always at war. Like when it comes to business. A person is a businessman first and then a Hindu or a Muslim. But during Covid, it was rare to find a donation drive in a Hindu neighbourhood helping out a Muslim. This wasn’t true the other way round,” says Naseem Ahmed, who runs an e-rickshaw in the city.

It is in such societies, Raina feels, that Kabir’s teachings can ameliorate.

“In times of crisis in India, or other places where there are conflicts and identity crises, Kabir shows you a path where you say you have to rise beyond your identity, religion, caste or race,” Raina says.

(Just as the sesame seed contains oil
And fire is within the flintstone,
Your god is within you,
Wake up if you can),” Kabir writes.

As several participants at the festival pointed out, one of the main reasons Kabir continues to resonate with people centuries after his time is that his writings draw from quotidian life.

His philosophy is simple and subtle, and dire­ctly impacts you. He says everything straightforward. He talks about being polite to others, being kind to those weaker than you. “He teac­hes you to remain honest and be patient,” says Umesh Kabir, a spiritual mentor and researcher of theology.

(Do not oppress the poor and weak,
Think not they are helpless
Remember, the breath of the lifeless
Can burn steel to ashes),” writes Kabir.

Umesh delivered a talk on living the Kabir philosophy at the festival. In the backdrop of volatile times that India has been seeing over the last several years, he says oppressive forces existed in Kabir’s lifetime too.

The Sufi saint had to face criticism and often got into trouble with the rulers for his beliefs. “Materialism has had an impact on Varanasi and every other place, and it was prevalent in Kabir’s Varanasi as well. He too faced a lot of opposition. It happened then, it’s happening now, and it will continue to happen, but that doesn’t mean truth will change,” says Umesh.

“If he would have lived in today’s times, he would have faced similar opposition, but he wouldn’t have cared what others thought of him. Despite everything, he wrote back then, and he would have written today as well,” he adds.

By Trisha Mukherjee in Varanasi