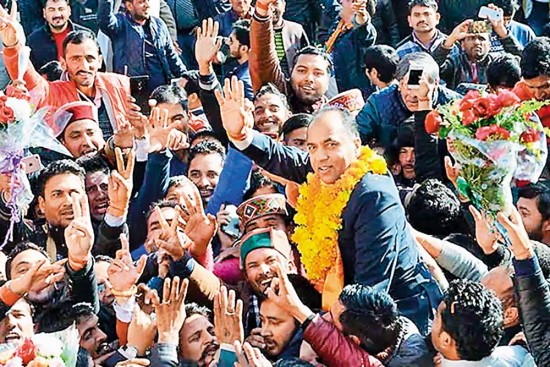 Jai Ram Thakur was not slated to become CM of Himachal Pradesh in 2017 when the BJP ousted the Congress from power. Prem Kumar Dhumal was. But Dhumal suffered a shocking defeat, forcing the BJP to turn to Thakur for the top job. Nearly four years later, luck might have run out on 56-year-old Thakur as speculation about a possible change of guard in the hill state swirled across political circles from Shimla to Delhi.

What fuelled the speculation was Thakur’s visit to Delhi earlier this month for a meeting with BJP natio­nal president J.P. Nadda, around the same time the party unexpectedly ­replaced Gujarat CM Vijay Rupani. With ­neighbouring Uttarakhand too seeing a change of guard not too long ago, there are conjectures about a similar move in Himachal.

Giving credence to the speculation was the rise of Anurag Thakur, who was elevated from minister of state to a spot in the Union cabinet. With his ‘Jan Ashirwad’ yatra drawing massive resp­onse in Himachal, his showing up in his home state quite frequently and taking decisions on the state, many saw the developments as signs of the minister’s increasing involvement at the cost of overshadowing the chief minister.

Though Jai Ram Thakur right now faces no major challenges to his leadership, he could be in for more testing times. Having lost almost two years to the Covid pandemic and lockdowns, which badly affected governance and development initiatives, Thakur is not left with much time to upgrade his rep­ort card that the party could encash in the November 2022 elections.

Neither does he have history on his side. Himachal has never returned the ruling party to power, and under Nadda—also from Himachal—the BJP would be keen to break the five-year jinx. Party sources say the BJP can’t aff­ord to take risks and will rather go to the polls with a face that ensures its return to power. One advantage the BJP sees is the absence of Congress’s Virbhadra Singh, a six-time CM who died recently.

Jai Ram Thakur also has to clean up his act. Questions have been raised about his weak grip on the government, a lacklustre bureaucr­acyand non-performing ministers—some facing corruption charges. Many see Anurag Thakur as warming up to the CM’s post as he also carries the legacy of his father Prem Kumar Dhumal, a two-time CM. Anurag Thakur may not be an aspirant to the slot right now, but remains a possible choice for the future, party sources say.

As things stand, Jai Ram Thakur may have to put up a strong face and deliver. He has already made a mark at the nat­ional level with his state achieving 100 per cent first-dose Covid vaccination. Thakur now needs to put his house in order by revamping the cabinet—throwing out some of the bad apples. Till then, he will definitely remain under scrutiny—his most ­crucial test as he enters the fifth year of his term.

(This appeared in the print edition as "Himachal CM on Notice?")

By Ashwani Sharma in Shimla