Farmers’ movement reaffirms that peasants are makers of their own rebellion. 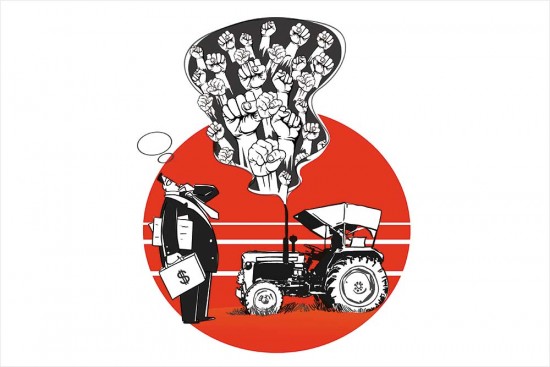 The farmers’ agitation, like any other soc­ial movement, has its own text, con­text and sub-text. The text of agitation, quintessentially, is the protest against big corporate capital being proffered by the government, typically evident in the context of the three farm laws. Broadly, farmers see the announcement that these laws would be repe­aled in the ensuing winter session of Parliament as a pyrrhic victory—too little too late. After all, nearly 700 farmers died protesting. It is the sub-­text that mystifies the fine print of agrarian ref­o­rm, and where the movement’s discourse is emb­edded.

To put the text in perspective, let’s recall the thr­ee central farm laws. ‘The Farmers’ Produce Tra­de and Commerce (Promotion and Facili­ta­tion) Act, 2020’, ‘The Farmers’ (Empowerment and Pro­tection) Agreement of Price Assurance, Farm Services Act, 2020’, and ‘The Essential Comm­o­d­i­ties (Amendment) Act, 2020’, were aimed at sun-­setting the Minimum Support Price (MSP) reg­i­me through a new arc­h­itecture of contract farming, bereft of any crop-­price guarantee or clear dispute resolut­ion mechanism. It also laid down a roadmap for hoarding and storage of some essential farm pro­duce by private traders, mainly big corpora­tes, which they were legally unable to do before. The so-called agrarian reforms by the Centre, predicated on these three enabling laws, were not only an indictment of federal principles as enshrined in the Constitution, but a recipe prepared for both national and global neo-liberal age­nda. The laws marked the continuation of the Nat­ional Agricultural Policy announced by the BJP-led NDA coalition on July 28, 2000, to indu­st­rialise and privatise the agrarian sector for exp­ort and trade-led growth. The debilitating imp­lications of the policy shi­ft, as perceived by the farmers, were, among others, the removal of price support and subsidies, com­plete dependence on the vagaries of market forces, absence of government cont­rol and acc­ountability, and easier import/export of agric­u­ltural commodities within the larger fra­mework of global trading systems in agriculture. In a nut­s­hell, farmers saw these laws and policies as an ins­trument of land grab by corporates.