JD(U)’s No. 2 Problem: Battle For the Second In Command 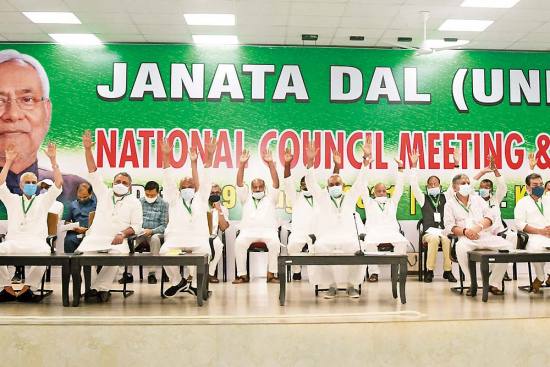 Bihar CM Nitish Kumar may be the JD(U)’s undisputed leader, but the question of who is second-in-command appears to have triggered an intense power struggle in the party. While Nitish goes about devising new strategies to keep ally BJP guessing about his new moves, Union steel minister R.C. P. Singh, former Union minister Upendra Kushwaha and JD(U) national president Rajiv Ranjan Singh, aka Lalan Singh, are engaged in a battle of one-upmanship to prove themselves the mightiest in the party—next only to their numero uno, of course. While RCP, a former IAS officer, is widely considered to be the most loyal to Nitish for more than two decades, Kushwaha and Lalan—old political associates—are also considered close to the CM, though both have had bitter fallouts with him in the past.

On the face of it, all three have ­resolved to work together to realise Nitish’s dreams to make JD(U) the ­biggest party in Bihar after the setback in the 2020 assembly polls, but there is apparently no love lost among them due to vaulting political ambitions. As a result, they have all been organising individual shows of strength through meetings, rallies and yatras.

It all began with RCP’s induction in July as the lone JD(U) minister in the Narendra Modi government, though it had been widely assumed that both RCP and Lalan would be made Union ministers. It came as a surprise as Nitish had declined to join the Modi cabinet in 2019 when JD(U) was ­offered only one berth.

Lalan later sought to obliquely blame RCP, who was the party’s ­national president when he was made minister. “It is the party president’s prerogative. The decision to not join the Union ministry in 2019 was taken when Nitish was our national president,” he said, dropping ample hints that RCP had accepted the solitary berth against the party’s wishes. RCP sought to ­subtly clear the air saying nothing was done without Nitish’s concurrence. However, though the newly-anointed minister emphasised his readiness to continue as party president, Nitish ­elevated Lalan to the post soon ­thereafter, widening the chasm ­between the rival camps.

R.C.P. Singh, ­Kush­waha and ­Lalan Singh have been ­organising ­individual shows of strength.

There was a third angle also to the infighting at the top level. Kushwaha, who had merged his Rashtriya Lok Samata Party with the JD(U) and was made its parliamentary board chairman earlier this year, was tipped to be the JD(U)’s national president as both RCP and Lalan were supposed to join the Modi government. However, after Lalan failed to make it and ended up becoming the party’s national president, Kushwaha was left high and dry. Lalan sought to mollify him later, but it evidently came as a letdown for Kushwaha. He has since been on a statewide yatra and his supporters have already projected him in some places as the next chief minister.

Nitish, on his part, says there is no dispute in the party as RCP had ­proposed Lalan’s name for party president at the national executive meeting in Delhi. Lalan also denies that there are different camps in the party. “There is only one camp—the Nitish camp—in the party and we are all committed to making JD(U) the number one party in Bihar again,” he says.

The Opposition, however, insists that JD(U) is indeed grappling with an intense power struggle. RJD leader Tejashwi Prasad Yadav says Kushwaha was not made party ­president even though he had merged his party with the JD(U) with high hopes. “He has been chairman of the JD(U)’s parliamentary board, a post that does not even exist in the party constitution,” he says. Going a step further, LJP president Chirag Paswan says the JD(U) is headed for a split ­because of the power struggle “The party is ­divided into many camps and every camp is trying to assert its own ­supremacy. The Nitish government is not going to last its full term because of that. Bihar is bound to have ­mid-term polls,” says Paswan.

(This appeared in the print edition as "The Battle for No. 2")