Kamla Bhasin was accepted as a woman with a special mission, by men and women together, not only in her country but across South Asia. 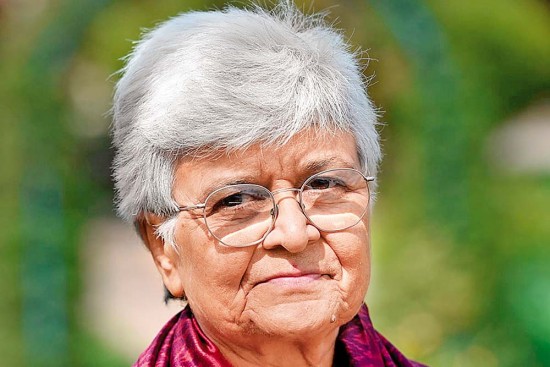 I have been looking for short, simply written articles on patriarchy that I could share with activists—both women and men. Most of what I had read was either too difficult to understand, or too full of jargon, or assumed prior knowledge of the subject. I try to look at patriarchy as we experience it in our lives, as a concept which explains women’s subordination.

From the introduction to What is Patriarchy by Kamla Bhasin

She passed away at the brahm muhurt, 3 am, September 25, 2021. People from all walks of life began to pay tributes to this feminist icon who stood for gender justice and dignity for all. The above quotation from Bhasin’s much read and appreciated monograph easily explains where her emphasis lay—in activism. She was a feminist in theory and practice. She knew it is not enough to understand the system of patriarchy, but to change it. I won’t say transform it, for patriarchy really needs to be brought down, not transformed. Kamla knew it doesn’t only debase women, but also men, especially from marginalised communities like Dalits and Adivasis. She understood that this system of super-exploitation of women’s labour also exploits men, by placing them within vulnerable social structures of class, caste, region and religion. That’s why she wrote in the preface of her monograph: “It is intended for activists who may not have access to books and journals”.

From her days at the UN, she realised globalisation would exploit women’s labour more acutely, and render society more unequal.

It is her activism, her praxis that made Kamla Bhasin what she was. Her work, in the form of slogans like “Hum le ke rahenge azadi”, poems and short, conceptual tracts on gender; her participation in the One Billion Rising Campaign against gender violence; and major philanthropic work promoting education and equality in society, won her many awards and acclaim, including the Ladli Lifetime Achievement Award in 2017. Her feminist activism led her to recognise the needs of liberating women of the entire subcontinent. She was accepted as a woman with a special mission, by men and women together, not only in her country but across South Asia. From her days at the United Nations, she had understood that globalisation as a special project of capitalist development, would exploit women’s labour more acutely, and would render society more unequal. It led her to resign from the job and join the arduous struggle for equality, fairness and dignity of life for all. She became part of the nebulous network of South Asian feminists and remained there till the end. She wanted to sing songs of life in all its beauty and abundance. No wonder she founded the NGO against gender violence, Jagori, to carry out her vision of a life free from the monotonous, exploitative drudgery of domestic labour for women.

On a personal note, I had been with her on a few occasions at discussions and seminars. I was the academic creature who complicated theoretical concepts more than required, against whom she railed in her monographs. After I became the director of the School of Gender and Development Studies at IGNOU, I invited her to record a programme on gender violence and ways to mitigate it. She accepted the invite, but for another date and time, which never materialised. I kept hoping to invite her for our International Women’s Day celebrations. She would surely have loved to join us, and at the end of the programme, sing her songs of life and freedom.

She was only 75 when she passed away, leaving this world as unequal as before. But her spirit fills it with enduring hope that she infected in us. One will miss the smirk in her smile and golden rays of her heart. Only worshipers of inequality and injustice will not see its illuminating glow.

(This appeared in the print edition as "The Azadi Song")

(The writer is a political theorist and an award-winning feminist poet who writes in Hindi and English. She is also the founding director and professor at the School of Gender and Development Studies, IGNOU.)