Five years after ‘snatching power’ from Congress, the BJP is looking to win 40 seats this time 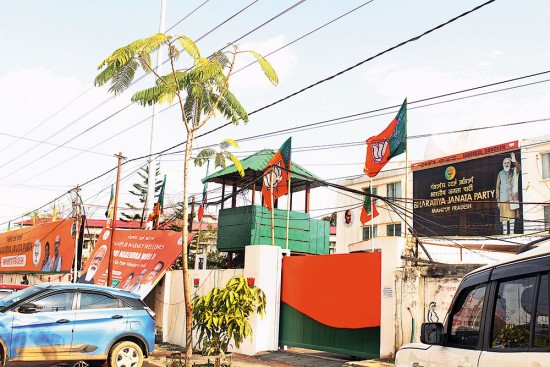 On January 17, the Election Commis­sion postponed assembly elections in Punjab by six days to February 20, to enable lakhs of devotees of Guru Ravidas to attend his birth anniversary celebrations in Varanasi. In the Northeastern state of Manipur, tribal communities have made a similar appeal to the poll panel—to change the polling day for the first phase on February 27 which falls on Sunday. More than 40 per cent of the state’s population is Christian, for whom Sunday prayers at the church are an intrinsic part of their faith.

The EC is unlikely to heed to the plea by Manipur’s tribal groups, and many fear that this could affect turnout when the BJP-ruled state votes over two days—the second phase is on March 4—to elect a new 60-member assembly. In at least 20 reserved seats, tribal voters can decide the outcome of the results. The infl­uential All Tribal Students’ Union Manipur (ATSUM) has lashed out at the poll panel, saying it lacked the ability to appreciate the spiritual values, beliefs and practice of Christian communities.

Beyond the tribal anger, there are not many visible signs of an impending election, being held under the shadow of a rampaging pandemic that has killed more than 2,000 people in the state. With the EC banning election rallies and physical campaigning until February 11, there are no loudspeakers, music, public speeches, entertainment or gatherings. Party offices are devoid of crowds, barring a few visitors. On the surface, Manipur is a picture of ser­enity. Calm, though, is just a façade in the state, as much as it is in the entire Northeast. In December, a youth was killed and his father seriously injured in Thoubal district, while a political worker and a policeman were shot dead in Imphal West early this year in pre-poll related violence. There have been several other minor disturbances, such as threats to potential candidates, scuffles among workers, an IED blast and recovery of bombs. 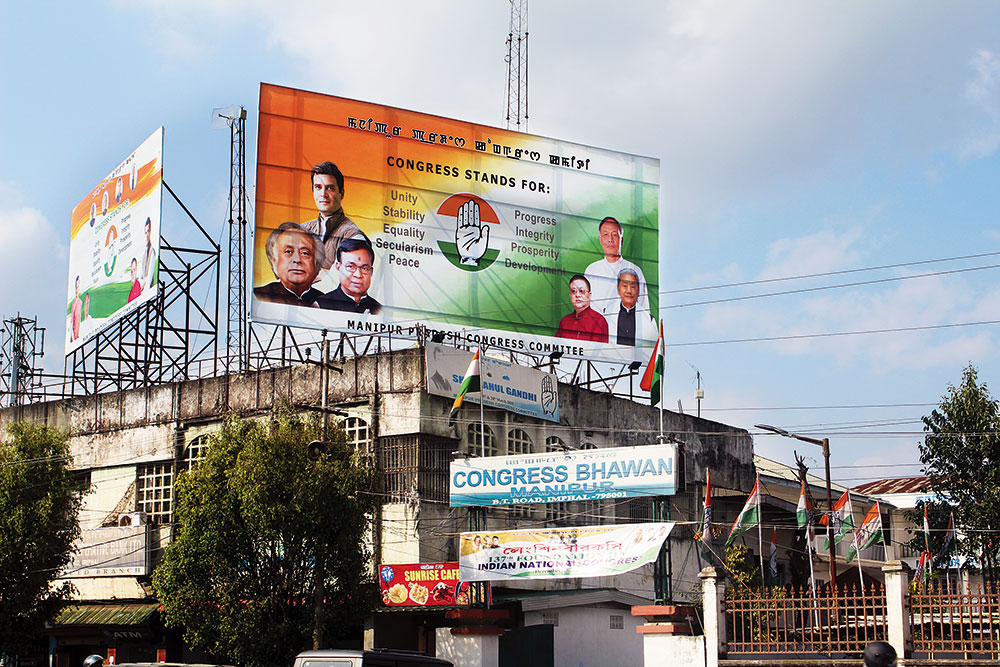 And in the latest developments, intra-party disputes have hit the ruling BJP following the announcement of the party’s list of candidates. Supporters of several leaders who were denied candidature went on the rampage, burning party flags and vandalising its offices, especially in the valley areas. At least three sitting MLAs have been dropped.

Virtual campaigning, as suggested by the EC, has found few takers in the state. Except for a few video uploads or posters on social media or a few new Facebook pages of a party or a candidate, not much is happening online. There have been debates or discussions on WhatsApp groups, mostly among youth and urban citizens, including those living outside the state. Though there are no physical campaigning or rallies in urban areas of Manipur—state capital Imphal and adjoining areas—in rural tribal areas candidates are seen campaigning and holding meetings.

The Congress had the most number of MLAs in 2017. But it was forced to sit on the Opposition benches as the BJP formed the government with help from other parties.

Candidates for tribal constituencies are unl­ikely to rely on or prefer virtual campaigning. Without physical appearance or physical interaction with the public, tribal rural voters in Manipur cannot be impressed. A candidate’s virtual campaign will not reach any of the voters in tribal households or villages simply bec­ause most of them do not have a mobile device or a smartphone, let alone an internet connection or social media account. Candidates know this very well and so they are unlikely to follow the EC’s ban on physical campaigning. Many candidates themselves are not tech-savvy or soc­ial media-friendly in Manipur.

The BJP’s ascension to the throne in Manipur in 2017—a first for the party in the state—did not happen due to an organic growth of the party but through mass desertions from other parties, especially the Congress. Incumbent chief minister Nongthombam Biren Singh himself was a Congress leader who switched over to the BJP in 2016 when the country was awash in the Modi wave. The mass migration and party-hopping to the BJP began immediately after the 2017 election result. Though the BJP, with 21 seats, did not get an absolute majority, it still managed to form the government with support from the National People’s Party (NPP), the Naga People’s Front (NPF) and Lok Janshakti Party (LJP). Ironically, the single-largest party Congress, with 28 elected MLAs, was forced to sit on the Opposition benches.

After five years, the BJP claims to have an abs­olute majority with more than 30 MLAs on its side. The Congress is believed to be down to 20 legislators. Absolute numbers are not known as dissenting MLAs hide which party they are supporting to avoid action under the anti-defection law. Both the NPP and NPF have four MLAs each, while the LJP and Trinamool Congress have one each. There is one independent MLA in the outgoing assembly. For the BJP, the goal is to increase its tally to 40 in the upcoming polls. The target was announced by Union minister and party in-charge of the Manipur elections Bhupendra Yadav in September last year. The party is also going solo. No political party has announced any pre-poll alliance this time around, preferring a wait-and-watch game. Allies in the outgoing coalition government, like the NPP and NPF, are hoping to triple their score from the previous election. With creditable performance and management of cabinet seats in the coalition, the two relatively young parties in Manipur have gained confidence over the years and are preparing to contest in 20 to 40 seats this time.

The Congress, once the most dominant party in the entire Northeast, is having difficulty in finding candidates. Forced on the backfoot by defections, including by senior members, the party has so far named candidates for only 40 seats, 19 less than last time. However, the party is likely to name candidates in more seats closer to the voting dates. The Communist Party of India-Manipur State Council (CPI/MSC) has announced two candidates, both women. Other parties that are likely to file candidates in the coming days are Trinamool Congress, Janata Dal ( U), LJP and Manipur People’s Party.

The Congress has fielded three women candidates out of 40,  while the BJP has named three,  one more than the previous election. A major disappointment for a party applauded for having the first-ever woman state party president.

(This appeared in the print edition as "Frontier Fault Lines")