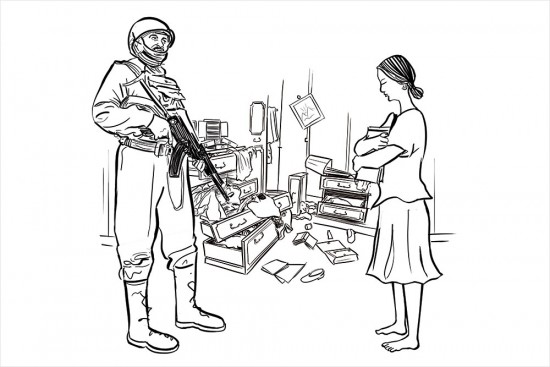 My sister and I never walked to school. For a long time, I thought this was just one of the many indulgences my parents showered on daughters they loved. Somewhere in the fraying folds of my memory, I recollect a mother being chastised by the Mother Superior of the Catholic primary school we attended—for bringing her daughter dirty and unkempt to school. Better ugly and unattractive than clean and…my mind refuses to remember the rest of what the woman replied in clear words. Perhaps, it is because she spoke in my mother tongue. Or, perhaps, it is because of the raw and vulgar words she used to roughly etch the silhouette of an unthinkable brutality into my eavesdropping ears.

I remember exactly how I felt that day, a piercing dread slowly imploding in my gut as I tried to go back to the business of playing tag at recess. That night, it took me a while to fall asleep. I pictured my scruffy schoolmate walking back home. I thought about other girls, the tidy ones with their long black hair in braids, and wondered how they walked past patrolling soldiers to reach their homes.

Last week, some of us met to make sense of the Oting massacre. A woman among us recalled her childhood—walking home from school with a decent-sized rock inside her bag in case the soldiers attacked her. She recalled how her schoolmates would all make ‘ugly faces’,  as if only beautiful women are raped. An older woman confided her experience with soldiers. She was home with her family when soldiers with guns walked in to search her house. Too surprised and frightened to protest, her parents, brother and household members forgot to go find her in her room and warn her.

So there she was in the room she shared with an older girl who worked in their home—she was 14—when two soldiers walked in. They told her, in Hindi, not to be alarmed as they searched the room. Then they searched her body, saying they were just checking, all the while telling her, don’t be scared, nothing will happen. It was only after they left, having turned the whole house inside out and finding nothing, that the household members managed to shake themselves out of fear and come to check on her. It was enough time for her to straighten out her clothes. It wasn’t rape so I never said anything, she told me. When she finally made her own house 40 years later, she made sure every room had a door with a sturdy bolt.

I went along with Naga women tribal leaders to meet the Nagaland Governor to submit a memorandum demanding repeal of AFSPA and justice for those massacred in Oting. As she read from the memorandum, Prof. Rosemary Dzüvichü—a woman who has survived death threats, malicious attacks and slander with stoic resolve—fought back tears recalling the many females, children and women, who have borne the brunt of the impunity this act grants to armed forces. Another woman stood up to recount how soldiers shot a pregnant woman. I understood why I was driven to school as a student in Kohima, why those who were able, sent children of my generation to boarding schools outside Nagaland. As a parent I now understand, it wasn’t just for better education. For a child, a sense of security is priceless. It is the only soil in which a healthy mind can grow.

At the opening ceremony of last year’s Hornbill Festival, I ended up seated next to a woman with her four-year-old daughter fast asleep. My eyes were drawn to this sweet girl, snuggled in her mother’s embrace, sleeping soundly through the cacophony of the festivities. The woman and I went from exchanging smiles to details about our children, then our families and our lives. She was from the Assam Rifles, she said, and her husband was posted elsewhere in India. So you mean you are a soldier? I asked. A major, she replied. I was impressed. I told her, I would love for my daughters to meet a woman soldier.

I saw a great opportunity to rewrite a narrative of occupation that skewed grotesquely towards one gender. After Oting, I see that it is more imperative than ever to work towards a fresh narrative. Perhaps, the major and I can begin when we meet over a playdate and braid ribbons into our daughters’ hair.

T. Keditsu is a poet, writer and educator