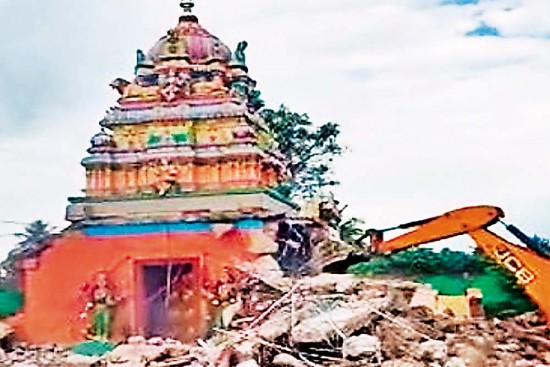 Karnataka’s BJP government found itself in a tricky situation this month when it faced the ire of Hindutva groups over the demolition of a temple near Mysore. The temple, located in Nanjangud taluk, was on a list of illegal religious structures across the state that were to be razed for encroachment. The drive was to comply with a 2009 Supreme Court order, whose implementation was being monitored by the Karnataka High Court, which had taken up a suo motu petition two years ago. Deputy commissioners of the districts had been instructed by the chief secretary to demolish at least one illegal religious structure in every taluka, every week.

However, when the Mysore district administration brought down the Mahadevamma temple in Nanjangud in early September, incidentally on the eve of the Gowri-Ganesha festival, a backlash followed. Mysore MP Pratap Simha of the BJP held press conferences to protest the move, while outfits like VHP and Hindu Jagaran Vedike took out demonstrations against the government. Meanwhile, another group of right-wing activists issued a death threat to the CM and were subsequently arrested. The Opposition too moved in, with Congress leader Siddaramaiah accusing the BJP of acting “against Hindu sentiments”.

The Basavaraj Bommai government responded with a flip-flop—it issued showcause notices to Mysore district officials, while ­temporarily halting the demolitions. According to reports, only about half of the 5,688 ­illegal ­religious structures identified in Karnataka after the apex court’s 2009 order have since been demolished, ­relocated or regularised.

With a legislative session underway, the Bommai government chose to bring in a new bill to tackle the ­situation. This week, it tabled the Karnataka Religious Structures (Protection) Bill 2021, which seeks to protect religious structures that had come up in public places so as to “not hurt the religious sentiments of the public”.

(This appeared in the print edition as "A Sentimental Flip")