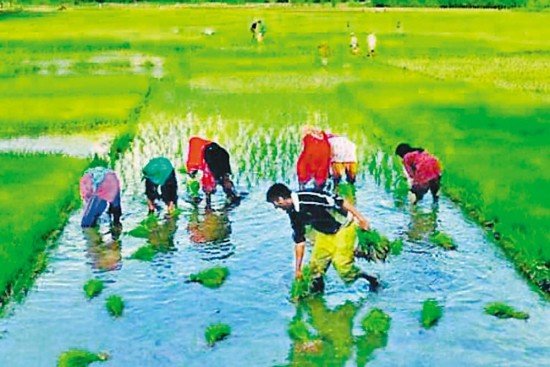 Ironies never cease. Just as farmers across Odisha were staring with trepidation at the prospect of a drought, the skies opened up last Sunday a deep depression in the Bay of Bengal and incessant downpour drowned most parts of the state. At 341 mm, Puri recorded its highest rainfall in 87 years, while Bhubaneswar, with 195 mm, broke a 63-year record. Paradeep received 219 mm. However, farmers and agriculture experts alike say this sudden rainfall will not save Odisha from drought in a significant way. The reason: it comes at a time when the kharif agricultural cycle is already at its fag end. Second, there is little prospect of more rain in the weeks ahead. “Farmers in our area, who had not been able to take up transplantation activities so far due to lack of rains, would certainly start transplantation now. But unless there is enough rain over the next few weeks, the crops will not survive,” says Chitta Ranjan Dash of Similipatna village in Khurda district.

Agricultural scientist Janakish Badapanda concurs. “It would be ­useful only if there is enough rain over the next couple of months, but the prospects are rather bleak. The ­current rains will perhaps help save crops in some areas for the time being, but would do precious little to mitigate the spectre of drought in the state this year,” he says.

One major reason for droughts in Odisha almost every other year is that water-intensive paddy cultivation is at the centre of agriculture here. It is overwhelmingly dependent on rains as only about 35 per cent of cropland in the state is irrigated, according to ­government data. The actual percentage of irrigated land is much less, says Badapanda. Erratic and deficient ­rainfall over the past few years has left farmers completely at the mercy of the rain gods. “It does not help if there is heavy rainfall for a couple of days, followed by long dry spells. Rainfall has to be evenly spread out for paddy crops to sustain,” says Damodar Khilar, a farmer in Mayurbhanj district.

The India Meteorological Department, which had predicted ‘normal’ rainfall in the state this year before the onset of monsoon, has now estimated that 27 out of 30 districts have received rainfall deficient by as much as 30 per cent between June 1 and August 21. The deficit has been particularly severe in five districts: Jajpur (54%), Bhadrak (50%), Balangir (43%), Keonjhar (42%) and Angul (40%). With the southwest monsoon fast nearing its end, there is little prospect of rains over the next few weeks. In effect, there is no getting away from drought for the average farmer.

(This appeared in the print edition as "Drought-Deluge-Drought")