For politicians, dressing up for the masses is about endorsing an image, or conveying a message 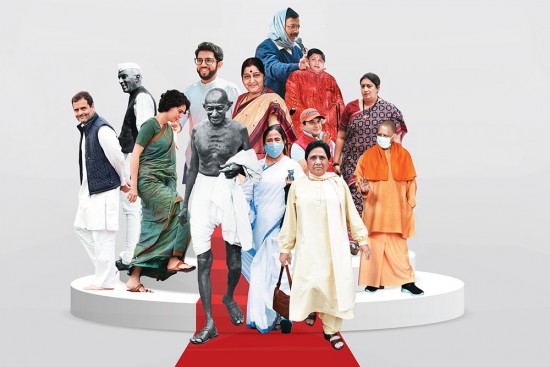 When the Trinamool Congress (TMC) found itself with a diminished presence in Parliament after the 2019 general elections, the party scurried off for a makeover. Over the next two years, West Bengal’s ruling party made conscious attempts to reset its political and governance narrative, partly aided by the political consultancy firm I-PAC, led by master strategist Prashant Kishor. Another transformation was also quietly underway. Widely considered as West Bengal chief minister Mamata Banerjee’s heir apparent, her nephew and party MP Abhishek Banerjee worked on an image makeover.

Between 2019 and 2021, Abhishek Banerjee lost weight, switched his glasses for contact lenses, acquired t-shirts to wear between events and polished his oratorial skills. By the time he was appointed party general secretary in June 2021, he had lost the chubby face and boyish dem­eanour he had had as the president of the TMC’s youth wing. Instead, his sharp jawline, smart wardrobe, and sleek hairdo gave him the appearance of a man on the cutting edge of politics—and style.

Message in a dhoti

American fashion designer Rachel Zoe once famously said, “Style is a way to say who you are without having to speak.” No one with even the slightest sense of ambition does not understand the impact of dressing to impress. Everyone does it to show that they fit into a certain milieu or have surpassed it, or to conform to professional standards or standards of wealth and class, or even to show how non-conformist they can be. But politicians have rather more riding on the impression they leave on people than the rest of us. If they are to have any success at all, they need to appeal to everyone across every class.

This is why, historically, the fashion choices of politicians tend to be motivated by ideologies. It is not so much about how they look, but what their look conveys. “A politician is part visual, part rhetoric and part action,” says fashion writer She­falee Vasudev, the editor-in-chief of The Voice of Fashion. “Whether it is a person or a poster or another element of election paraphernalia, the visual is very important.”

“A politician is part visual, part rhetoric and part action. Whether it is a person or a poster or another element of election paraphernalia, the visual is very important.”

The use of fashion as a tool of communication can be traced to Mahatma Gandhi’s decision to wear a dhoti. That dhoti inspired Indians to boycott all things foreign. It brought an entire nat­ion together. It was comfortable for the climate. It was as simple as the lifestyle Gandhi aspired to. And it made the colonists positively apoplectic when the “half-naked fakir” as Winston Churchill called Gandhi, stood out on the international political stage, inspiring suppressed peoples all over the world to defy conventions imposed upon them. All this conveyed by a home-spun, unstitched piece of fabric.

In stark contrast to Gandhi, Subhash Chandra Bose’s approach to the independence movement was to take the fight to the British. His slogan, “Give me blood, I will give you freedom” was paired with a military uniform to convey the message that he was not afraid of violence for the achievement of India’s independence.  “A person in a military uniform sends across a certain message. It’s always intimidating,” explains Parag Goswami, professor of fashion styling and image design at Pearl Academy.

Decades after Gandhi and Bose, India is slowly beginning to get over the effects of colonialism. At the same time, globa­lisation has created a kind of corporate and urban uniform worn by or asp­ired to by millions of people. This means that politicians today have some rather mixed messages to convey via their dress. On the one hand, the white kurta pyjama (or veshti or mundu) that has been the uniform of male politicians since the Swadeshi movement is still very much a part of today’s political wardrobe. “It is a meaningful sign to demonstrate the appreciation of Indian culture, value and heritage,” says Goswami. But India’s highly globalised cities are home to people who appreciate a business-like attitude to governance and are more cosmopolitan in their outlook. These people prefer their politicians—at least the younger ones—not just to represent them, but to look like them as well. 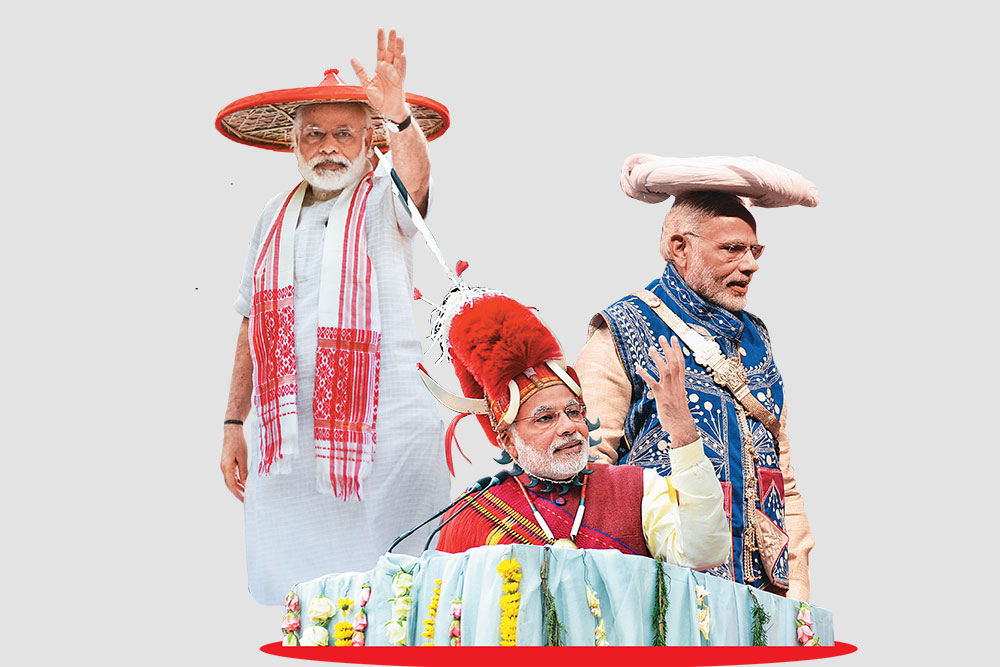 Many avatars of PM Modi.

So Aditya Thackeray, the 30-something Maharashtra cabinet minister, needed a complete makeover before the 2019 Lok Sabha elections, according to a former I-PAC employee. Thackeray had turned up for a formal meeting dressed in a t-shirt, track pants and rimless glasses with coloured arms hooked over his ears. “He looked like a college kid. We were asked to make him look like a neta,” said the pol­itical consulting company’s former employee.

Thackeray’s t-shirts and sneakers were rep­laced with crisp shirts in light pastel shades and formal shoes. Dark-rimmed round spectacles lent him a look that is smart and intellectual, something that the youth of the country aspires to. “When you try to connect to the youth, if you dress like them and talk like them, it’s a very powerful tool,” says Sunil Sethi, head of the Fashion Design Council of India.

Law of the local

According to Yatan Ahluwalia, image, fashion, grooming and etiquette consultant at Y&E Consultancy & Services, dressing politicians “is quite different from grooming an actor, model or even an indus­trialist.” That’s partly because their look must always change based on location and occasion. “When they’re on an election campaign, for example, it’s very important that they relate to the constituency and the region in which they will address their rallies,” Ahluwalia explains. “So we must keep in mind where they’re going and provide cultural elements in their dress: things like a turban, perhaps, or a shawl. We localise their outfit because that builds a connection between the politician and the people they’re addressing.”

The principal example of localised dressing is of course Prime Minister Narendra Modi who makes it a point when he travels to wear traditional outfits and regi­onal headgear of  the states he is visiting. It’s possibly because of Modi’s success in connecting with the people in this way that Arvind Kejriwal, Delhi chief minister and national convenor of Aam Aadmi Party (AAP), wears a Sikh turban when he campaigns for the assembly elections in Punjab. And in contrast, it’s possibly to div­ert attention from the party’s regional roots that TMC politicians campaigning for the assembly elections in Goa avoid obvious cultural markers in their dress. 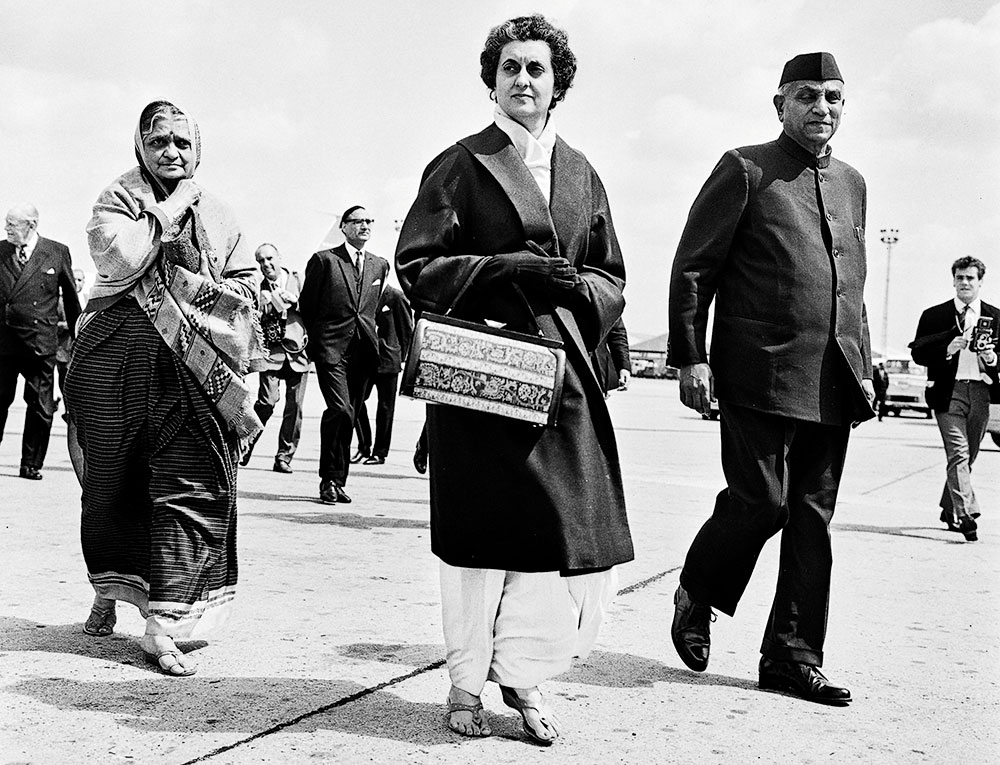 Politics is a battlefield and the assertion of power is one of the keys to success. This is why India’s women politicians tend to power dress. Power dressing, which emerged in the 1980s as a fashion tool for women to assert themselves in professions dominated by men, often comprises outfits that mirror traditional male outfits, such as suits.

Though younger women politicians from urban constituencies now occasionally wear Western and casual outfits to legislatures and events (for which they are inevitably lambasted), the saree is still the primary weapon in the power dressing arsenal for women. The late J. Jayalalithaa, the former chief minister of Tamil Nadu, cut an imposing figure when she added a cape to her saree. The late Sushma Swaraj, in a saree layered with a sleeveless jacket, a big red bindi on her forehead and sindoor in the parting of her hair, was also considered the embodiment of women empowerment. “Sushma Swaraj’s jacket itself was a power suit,” says Goswami. “A jacket is generally worn by men. But she balanced that out with the conventional idea of an Indian Hindu woman. With her bindi and sindoor, she came across as very rooted.”

For Bahujan Samaj Party leader Mayawati, fashion is a way to assert her Dalit identity and reclaim the resources and privileges that have been denied to her community for centuries. Mayawati’s diamonds and designer handbags, according to Goswami, convey that she is emp­owering her community. “She is a woman from the Dalit community in a position of power in a male dominated state like Uttar Pradesh, and her opulence comes across as a very strong message of pride and achievement. Semiotically, it’s a beautiful message,” Goswami says.

Equally powerful and strategic is the “consciously frugal Mother Teresa blue-edged cotton sarees” look of West Bengal’s chief minister, Mamata Banerjee, combined with white “rubber slippers”. While this look appears to have required very little thought, it is actually quite the opposite, says Vasudev. “She has a clearly crafted and well-considered idea of frugality. With her casual slippers and almost saintly saree, she removes herself from flamboyance because that’s how she wants to be seen,” Vasudev explains.

In her free-flowing sarees and iconic bob, Priyanka Gandhi Vadra seems to channel the strength of her grandmother, Indira Gandhi. But her wardrobe is also visibly diverse, with t-shirts, jeans, shirts, trousers and ethnic suits, just like the wardrobe of almost all modern Indian women. “She combines cosmopolitan outlook and Indianness beautifully. She wears handloom sar­ees in the interiors of India, and in Delhi, she might wear trousers and shirt, which a modern woman would relate to. That’s strategic,” says Goswami. “We also don’t find her wearing jewellery or makeup. She means business literally.”

(This appeared in the print edition as "Power Dressing")