Why did Rakesh Tikait revive his father’s secular slogan? Because reversing the effects of the 2013 riots on western UP’s politics is key to forging a united farmers’ front. 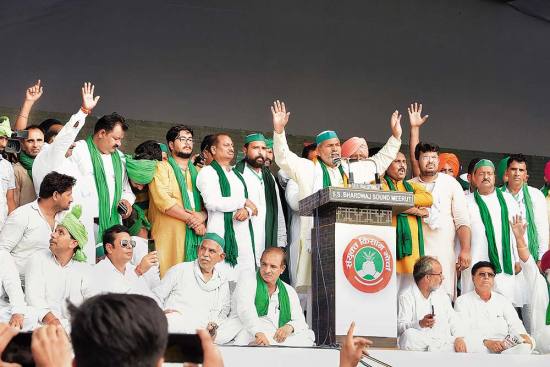 Towards the end of the six-hour-long ­mahapanchayat in Muzaffarnagar, UP, Bharatiya Kisan Union leader Rakesh Tikait ascended the main dias with Ghulam Moham­mad Jola—once his father’s trusted right-hand man—and a gaggle of other farmer union leaders. Holding hands, he leaned into the mikes and uttered the words “Allah hu Akbar, Har Har Mahadev”. For a brief mom­ent, the ­audience fell silent, unsure about how to react. Communal scars have run deep in western UP since the 2013 riots, which pundits say broke the long-existing Hindu-Muslim accord in the region and swung the political ­pendulum decisively towards the BJP, ­facilitating to a large extent its dominance over national politics since 2014. The significance of the organisers, Samyukta Kisan Morcha (SKM), choosing Muzaffarnagar—ground zero of the 2013 riots—as the mahapanchayat venue was not lost on ­anyone. On September 5, though, the recovery from the stupor was swift, as the crowd lustily joined in the ­sloganeering first made popular by Rakesh’s long-deceased father Mahendra Singh Tikait.

Nine months into their relentless struggle, farmer unions leading the protest against the Centre’s three farm laws promulgated in September 2020 have hardened their stance. After early days of negotiations that fell through with the government maintaining a hard line on any possibility of repeal of the laws—followed by sporadic confrontations between farmers camping on protest at the national capital’s borders and security forces, culminating in some violence on this year’s Republic Day—the protesters too have become more intransigent, as they kept expanding the scope of their ­demands from an initial 13-point charter, to take the fight to the opposite camp. Now, they are no longer satisfied with just complete withdrawal of the three new farm laws, but want to ­uproot BJP’s electoral domination, ­assessing that the party in power is not going to relent. The September 5 ­mahapanchayat was not only called as a show of strength—it is estimated the number of attendees ran into several lakhs—but also to firm up the future course of action, with a series of activities culminating in a call to voters in assembly poll-bound UP and Uttara­khand not to vote for the BJP or its ­allies. Already, over the past few months, BJP leaders in Haryana and Punjab have been facing farmers’ wrath while trying to hold political or social programmes.

However, not all peasants’ organisations are in support. The RSS-affiliated Bharatiya Kisan Sangh (BKS) ­considers the SKM—an umbrella of several farmers’ unions—as a ­“political” movement. BKS ploughs a lone furrow, saying it stands against ­“disruption of life and ­destruction of the nation’s properties”. It has separately submitted its own set of demands that includes an alternative to MSP, which they describe as “profitable price over a farmer’s input costs”, and, instead of withdrawal of the new laws, only seeks certain amendments and concessions. However, ­despite several such ­submissions, ­including a letter to the PM, they have little to show for.