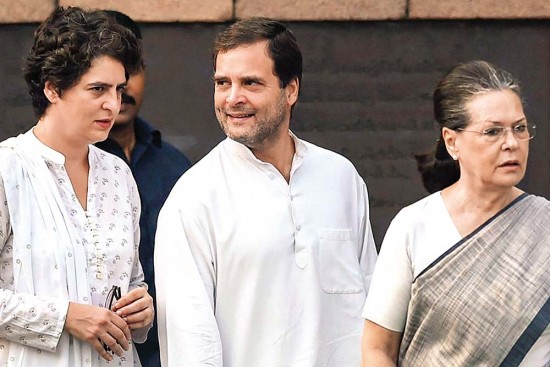 The recent defection of former Union minister Jitin Prasada, once a confidant of Rahul Gandhi, to the BJP has sent the political grapevine in a tizzy, with speculation on other possible high-profile exits from the Congress—including that of former Union ministers R.P.N. Singh and Milind Deora, also trusted lieutenants of Rahul in the past. Sources say backchannel talks have been initiated to prevent those like Singh—like Prasada, he is from Uttar Pradesh, where the Congress is desperately seeking revival in next year’s assembly polls—from jumping ship. These efforts haven’t met with much success, especially as Rahul seems unfazed by the desertions. “For every Prasada and Jyotiraditya Scindia (another Rahul aide who quit the party last March and helped the BJP topple the Congress government in Madhya Pradesh) who left after taking everything from the party, there are hundreds who joined to serve selfles­sly,” says spokesperson Pawan Khera.

Sonia Gandhi, meanwhile, is back to playing her familiar peacemaker role—soothing frayed nerves, massaging inflated egos and deflating imminent mutinies. Rahul, say sources, has shed his past proclivity for promoting pedigreed dynasts to key roles and, like Priyanka, wants to “mentor and encourage” first-generation politicians. As those rewarded in the past want guarantees of a perpetually ascendant political career, this has made Sonia’s task of keeping the flock ­together all the more difficult. Negotiating a difficult truce between Punjab CM Captain Amarinder Singh and his ­detractors, particularly Navjot Singh Sidhu, Sonia has also revived arbitration between Rajasthan CM Ashok Gehlot and his archrival Sachin Pilot. While Amarinder Singh is likely to rejig his cabinet, sources suggest he may still “have his way”—even if Sidhu is made deputy CM, the post may be shared with another leader and the former cricketer kept out of the coveted state unit chief’s post.