Built to house mill workers, the residential clusters are undergoing a slow transformation, with highrises coming up in their place. 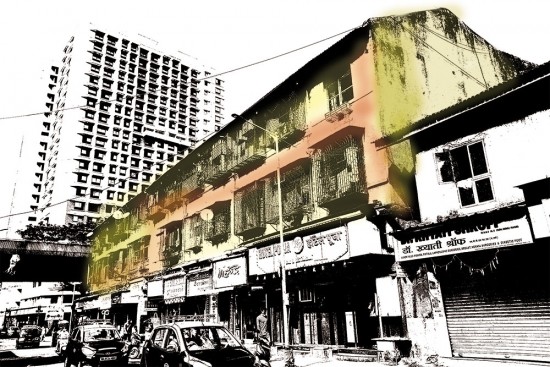 Eighty- seven-year old Pandharinath Sawant, an independent writer, came to live with his uncle in the Digvijay Mills Patra Chawl at Lalbaug when he was about eight years old. Though he was new to the chawl—a cluster of 10x10 houses built by mill owners for their workers—he did not feel left out or lonely. An hour after his father came to drop him at his uncle’s place “to study and become a Saheb”, the young Sawant had made his first friend.

Sawant’s chawl is surrounded by other chawls, each with a distinct character of its own. Each of these chawls is over 100 years old. Their faded walls, woodwork with peeling paint, rickety steps, an odd window hanging from broken hinges—all speak volumes of a present caught in a time warp of development. However, Sawant’s chawl is different. It is the cleanest of all the low-roofed houses, with a uniformity to the tiled walls (both inside and out). Outside, the narrow, tiled path winding through the chawl, tulsi plants in every conceivable type of pots, motorbikes parked in front of homes—are all geared to make a visitor perform some gymnastics. Though this chawl too is over 100 years old, the uniformity of its exterior belies its age.

The chawl dwellers say with pride that if one has lived in a chawl, they will feel lonely everywhere else. The chawls are spread out in long uniform rows, with rooms so small that two inhabitants can barely stand there at a time. Half the family sleep on the verandah outside, or other makeshift rooms in tiny lofts. Some even sleep on the paved footpaths running next to the chawls.

There is a common tap and a common toilet loc­ated at the far end of the chawl. While majority of the chawls were originally single storey, they grew vertically as the city’s population grew. The doors of the chawls are never shut. Privacy is an unh­eard-of thing here—closed doors during daytime would attract a fair amount of sniggers and gossip. Every chawl dweller is privy to the goings-on in the house of all his neighbours. Details of every conversation, argument, laughter or tears are whispered into willing ears, liberally peppered with distortions.

Modernity entered the chawls some decades ago when the women traded their saris for the more comfortable “nightie” or “gown”. Clad in these they go to the vegetable markets, the kirana shops, fish market—just about anywhere. There was a time when every family had clothes of a similar print—the father’s underwear, the mother’s blouse, shirts, frocks and even the parrkar-blouse (long-skirt and blouse) of young girls. 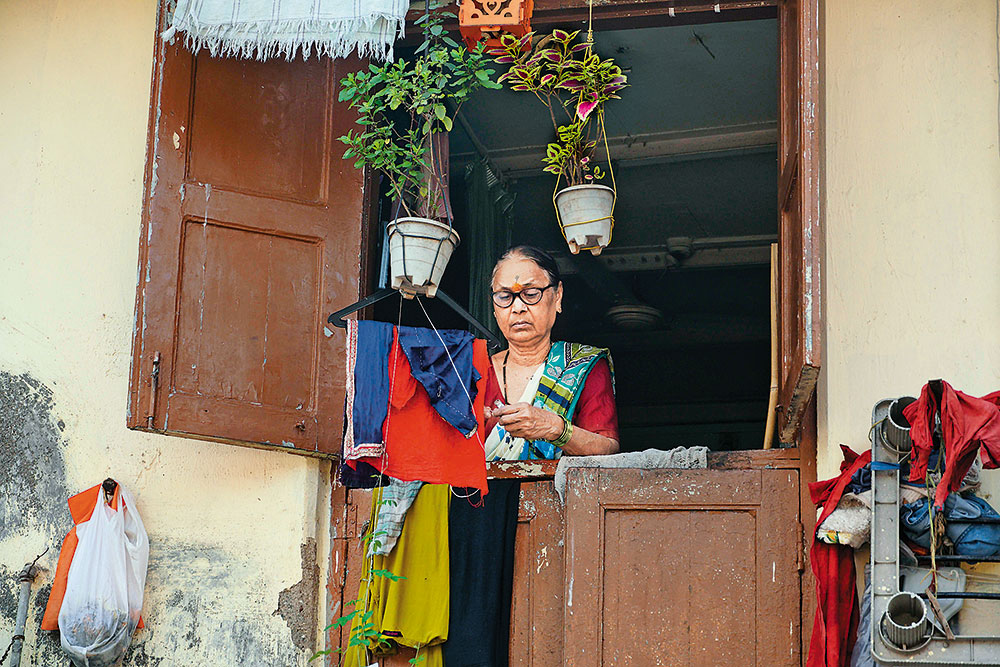 The textiles mills of erstwhile Bombay are res­ponsible for the birth of the chawls in the city. These mills extended from Girangaon in the Lalbaug-Parel area in Central Mumbai to Girgaum in South Mumbai, and spanned huge tracts of land. Employment opportunities offered by these mills saw large-scale migration from rural Maharashtra to Bombay, which was then far more compact than what Mumbai is now. The mill owners had probably believed that if their workers had a place to stay, it would enhance productivity and keep the mills running.

There was a time when every family had clothes of a similar print—the father’s underwear, the mother’s blouse...shirts and frocks.

The sirens of the mills signalling the start and close of shifts (all mills worked in three shifts) could be heard across Bombay, which stretched no further than Sion—unlike today’s Mumbai, which extends beyond Virar to the north and Mulund to the east. Clad in their white kurtas, pyj­amas and Gandhi topis, the mill workers were a common sight across the city. Not anymore.

After the great mill workers’ strike of 1982, called by trade unionist Dr Datta Samant, the mill economy collapsed. Today, silent chimneys and dilapidated closed mills dot both Girangaon and Girgaum. After the sirens went silent, the chawls had a burgeoning population of jobless youths, who became easy prey for the underworld gangs led by Arun Gawli and the late Rama Naik. Faced with losses of income, thousands of families stared at a bleak future. Their life of penury pushed many youths towards crime, and fights became a daily event at the chawls.

Narrating incidents from the gang wars that ens­ued in the 1980s, a resident of Sitabai Chawl in Lalbaug said, “We would stand on our balconies and see gangsters firing at each other. We were scared and no one could control these wayward youths. Those were terrible days. Even now there are some youths who take on freelance assignments from developers to evict chawl dwellers.”

As the mill workers’ strike continued, women in the chawls started pawning their meagre jewellery to make ends meet. This saw the birth of num­erous small-scale jewellery shops that clandestinely operated as pawn shops. They later started lending money at high interest rates. A percentage of their earnings were given to the gangs as protection money.

While Dagdi Chawl in Byculla became a gated community for those who owed allegiance to the Gawli gang, 144 Tenements (a cluster of chawls) located barely a kilometre away, became the headquarters and residence of the Rama Naik gang. 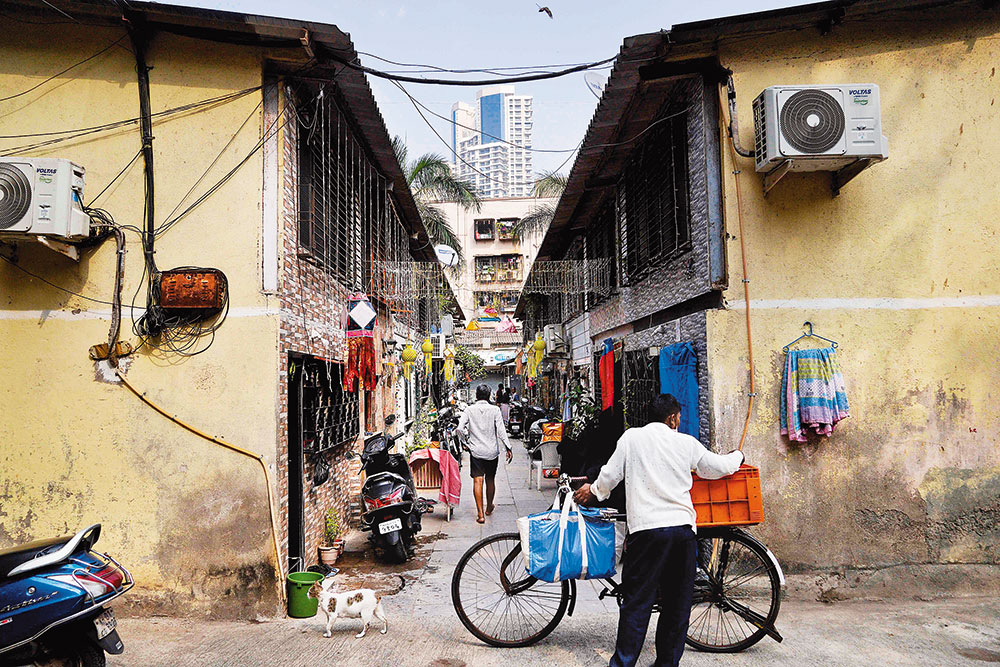 A highrise seen in the backdrop of a chawl.

Whether it is the chawls of South or Central Mumbai, the famed kinship is on display every day, in every way. They share their homes, food, worries, tears, happiness and festivities. Everyone opens their hearts, purses and homes for enga­gements, weddings, children’s birthdays, death rituals, etc. During the Covid-19 lockdown, when people in the highrises were sequestered in their homes, doors remained open in the chawls. “We were scared. We followed all Covid protocols, but we helped each other. When someone got ill, neighbours accompanied them to hospital and supported them with money, help and manpower,” said Sawant.

According to Sawant, pandemic or not, a chawl is an extended, cohesive, family unit. Meenakshi Supe, a resident of a Parel chawl, spoke of the common practice of “katori sharing”. “When we don’t have a particular item, we just take a katori and go to the neighbour’s house and borrow it. We give it back after we buy it. During Covid, all of us had less food to eat, but no one went hungry. We shared whatever we had,” said Supe.

After the 1982 strike, the mill economy collapsed. Today, silent chimneys and dilapidated closed mills dot both Girangaon and Girgaum.

Naresh Shinde was born and brought up in a chawl in Parel. He married a girl from a neighbouring chawl. While he worked with the media, his wife Supriya worked with a marketing company. Both their children, aged five and 10 , spend the day at a neighbour’s house, while the parents are out at work. “We leave the children at our neighbour’s house, which is around 2 km away. They offered to look after the children at no cost whatever. It is like our children are with their grandparents. Such is the bonding here,” said Supriya.

As chawls grew, a new culture and social life picked up around it. Thus, the theatre and culture of stage plays emerged in the chawls of Girangaon and Girgaum. Playwrights were born in the chawls of Girgaum and their plays on issues faced by mill workers found a resonance with those who lived in the chawls of Girangaon. Many theatres, including Bharat Mata and Hind Mata, where plays were performed, became popular with mill workers. The tamasha culture too got popular during this period. Today, chawls have become a victim of redevelopment. The exodus of the Marathi population from the heart of Mumbai—from its chawls, to far-flung suburbs in the city’s north—began some years ago. As the Marathi population started moving out, so did their culture. The transition from Bombay to Mumbai has left its mark on the chawls. As Bombay, the chawls witnessed the Quit India movement, Indepe­ndence movement, women’s and worker’s rights movements, and so much more. The change of name brought with it neo-liberal redevelopment—highrise societies on the land where chawls and mills once existed.

Today, girls living in chawls do not want to marry boys from the chawls, while girls who have grown up outside do not want to marry and live in the chawls. Joint families have gone nuclear; educated and working children of chawl dwellers prefer to live in gated societies. Since affordability is a major issue considering the exorbitant real estate prices in Mumbai, a majority of youth from the chawls have moved to far-flung suburbs, while the elderly have moved back to their villages—breaking up the age-old joint family system.

Today, the real estate boom has transformed the landscape of Lalbaug, Parel and Girgaum, and the life of chawl dwellers. After the Haji Kasam chawl, the first to be demolished and replaced by a swanky, 23-storeyed highrise, there has been no looking back. About 1,000 families were rehabilitated from Haji Kasam chawl to this highrise, changing their lives and lifestyles forever.

Redevelopment is a strange feeling for others who await it. They are ecstatic at the thought of moving into new homes where bedrooms will not double up as living rooms and kitchens. A vast number of kholis (rooms) have been transformed into self-contained flats; more are on the way. Redevelopment also means many steps up the economic and social ladder and in homes where doors remain shut. In their new homes, they have no access to their neighbour’s house, but closed doors mean safety and security.

The highrises being built to replace the chawls come with state-of-the-art elevators, wide porches and difficult-to-pronounce names. From being slumdogs, Mumbai’s chawls are becoming millionaires, with no pit stops in between.

(This appeared in the print edition as "Slumdogs to Millionaires")