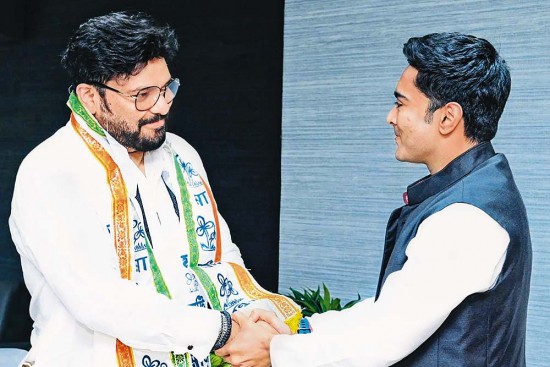 When he sings, they say, it is from his heart. When Babul Supriyo is upset, he pours his heart out. That’s precisely what he did when he was removed from the Union ministry in the latest ­reshuffle a couple of months ago. Following his removal, he announced quitting politics and decided to resign from the Lok Sabha. But BJP national president J.P. Nadda prevailed and Supriyo, who joined politics ahead of the 2014 general elections and served as a junior Union minister, decided not to resign. He stayed put. Yet, speculation swirled that his association with the BJP won’t be long. Questions were asked: Where would he go next? He answered that this weekend. The ­playback singer/politician joined Mamata Banerjee’s Trinamool Congress.

He is the first BJP Lok Sabha MP to switch over to the Trinamool. The BJP has already lost three MLAs to Banerjee after she ­returned to power for a third term in West Bengal. Trinamool sources say Supriyo will resign from the Lok Sabha, which will call for a ­bypoll at the Asansol seat within six months of his resignation. They say the BJP is not prepared for a Lok Sabha bypoll in Bengal. Supriyo’s departure from the BJP has stirred a call for reorganisation of the party in the state. Chandra Kumar Bose, a former vice president of BJP’s Bengal unit, wrote on Twitter that a “complete revamp” like what the BJP has done in Gujarat “is necessary to recharge the party which is at present in shambles”. But the BJP’s Bengal unit leaders don’t agree with the comment.

(This appeared in the print edition as "Babul Goes To Trinamool")