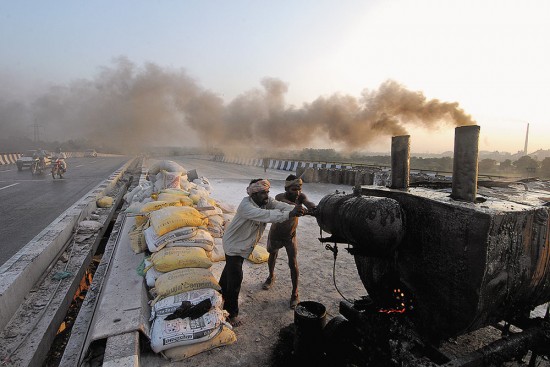 The iconic dialogue, “Tareekh pe tareekh (date after date)”, delivered by Sun­ny Deol in the film Damini, has nothing to do with air pollution. It refers to leg­al postponement of actions that need immediate attention, and thus closely res­embles how the problem of air pollution is dealt with across India. For Delhi, a list of solutions was clearly laid out in a white paper in 1997, but 25 years later, we’re still debating the same topics as part of a new act­ion plan under the National Clean Air Programme.

The problem is not that our air quality is bad, but that we postpone what needs to be done. It’s not that we don’t know what we must do, but that we settle for quick-fix solutions like smog towers and postpone long-­lasting ones.

Everyone agrees that vehicle exhaust is at the centre of our problem. There are three factors beh­ind this—number of vehicles on road, kilom­etres travelled and emission rate. We have in pla­ce the best emission and fuel standards, whi­ch means the only way to reduce vehicular emi­ssi­ons is by changing our travel habits—use per­­s­o­nal vehicles less, or shift to mass transport or non-motorised (walking and cycling) modes. For this to succeed, infrastructure support from the city and moral support of the public is necessary. Forcing vehicles to get off the road via odd-even schemes is bound to fail, because the­re is always a loophole to get around it. In this case, we have been postponing the need to imp­rove Delhi’s public transport since the 1997 whi­­te paper, which said the city needs at least 15,000 buses.

ALSO READ: Our Starless Skies: Even Stars Are Unable To Break Layers Of Smog

The problem is not that our air quality is bad, but that we postpone what needs to be done. It’s not that we don’t know what we must do, but that we settle for quick-fixes.

New regulations for coal-fired power plants were ratified in December 2015 with a compliance deadline of December 2017. For the first time, standards were introduced to limit emissions of SO₂, NO₂ and mercury, while those for particulate matter (PM) were tightened. The deadline was ext­ended to December 2019 under the pretext of more environmental and econo­m­ic analysis, then again to December 2022 und­er the pretext of pandemic and lack of reso­urces. In India, coal-fired thermal power plants are expected to continue supplying over 50 per cent of our demand for the next 50 years. This sector is also one of the main contributors of emissions. If anything, it is easier to inspect and control emissions at 200 power plants than in 100 million vehicles. Yet, we keep deferring to enforce the emission limits.

The problem is also with the fact that media div­erts our attention away from the problem. In the recent world air pollution rankings (IQair 2021), Delhi came tops. This is not because of a Diwali or of 2-3 weeks of post-harvest stubble-­burning in Pun­jab and Haryana. Ranking is bas­ed on data col­lected over 52 weeks, meaning we have an air pollution problem every day, even when it is raining. We need to talk about air pollution and question authorities every day, not postpone these to peak pollution periods only. Take this article itself, coming out at the peak of another pollution epis­o­de in Delhi. Why is that?

ALSO READ: Efforts To Clean Up Delhi’s Air Must Continue Through The Year Not Just During Winter

At the core of the problem is information. Whi­le there are gaps in our scientific underst­a­nding of how much pollution is coming from which source, the fundamental fact—that there are only a handful of sectors that need deep-dive management—is undeniable. We mustn’t allow analysis paralysis to postpone control mea­sures. We must promote public transport, walking and cycling; enforce est­ablished emission regulations; reg­ulate waste gen­eration and man­agement; and save trees, as they provide shade and surface for settling of dust. The time to act against air pollution is now.

(This appeared in the print edition as "Tareekh pe Tareekh")

Right To Breathe | Air Pollution: When Will Our Politicians Wake Up?

Show, Don’t Tell: With 'Lungs Billboard', See How Filthy Is The Air You Breathe

Air Pollution In India: The Time To Act Was Yesterday

Is India’s Pollution Data Hiding Behind The Poor?

For These Young Minds, Pollution Is A Bigger Menace Than Others

Children From Poor Backgrounds Are Worst Sufferers Of Pollution

Air Pollution In India: It’s Time To Wake Up, Stand Up...

Sarath Guttikunda is the founder/director of UrbanEmissions.info, a repository of information, research and analysis related to air pollution