Sandstone mining, to build the Ayodhya temple among others, provides vital employment, but endangers lives, livelihoods and the environment 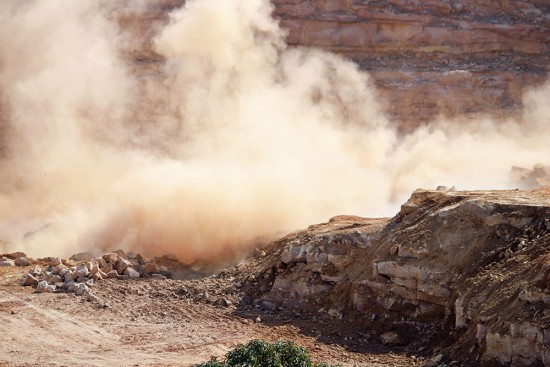 It’s a wintry afternoon, but it doesn’t feel like the usual January cold. Earth movers are droning, trucks are moving fast. When a siren suddenly starts blaring, workers run to safety. The sound of the siren and the reaction of the people is reminiscent of the 2015 Hindi film Detective Byomkesh Bakshi!, set in the Calcutta of 1942-1943, when Japanese bombers used to patrol the night skies during the Second World War.

The siren blares thrice at intervals of a few seconds. Then there is a loud bang, followed by tremors as the smell of gunpowder and smoke fills the air. There are at least 10 such explosions in about two hours.

These is no war in progress, though. The blasts were of bombs, exploded to mine stones. We are at the Kaimur range in eastern Uttar Pradesh, which covers 483 sq km and extends to Mirzapur district, about 50 km from Vara­nasi. This is the heart of pink sandstone mining in India. Kaimur is part of the Vindhya range, which starts from Gujarat and runs through Jabalpur in Madhya Pradesh, Mirzapur in Uttar Pradesh till Kaimur and Rohtas district of Bihar.

Pink sandstone is rough-weather resistant and easy to cut, so it attracts miners. It also all­ows percolation, which helps in recharging groundwater. Light green when raw, the colour of the sandstone turns pink over time. 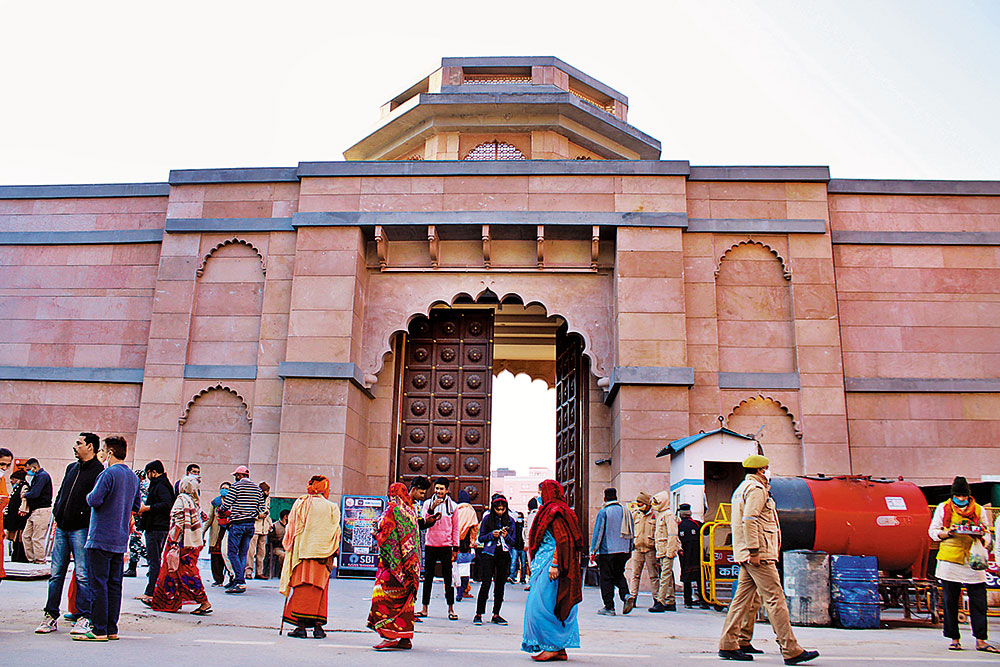 Front view of the Kashi-Vishwanath corridor

The unrestrained mining activity has rende­red the hillocks over a roughly 10 sq km area in Sonpur-Ahraura area of Mirzapur district bald and desolate. Around 100 holes, 10 ft deep, are dug with power tools to set off a blast at any one place, in which 32 mm-long packets filled with 200 gm gunpowder each are inserted. It needs 15 packets, containing 3 kg gunpowder, to fill each hole. Afterwards, all the packets are wired and the explosion is set off.

An employee of the mining company involved in the blasting work, on condition of anonymity, says, “At a time, we set off 300 kg of gunpowder. If this amount of gunpowder is set off in a vill­age, it will turn into ashes in minutes.”

Every day, at least 15 such explosions are set off in these hills, i.e., 4,500 kg of gunpowder is used here every day. The stone extracted from here is sent to Rajasthan to carve idols. The same stone is also being used in the construction of the Ram Temple at Ayodhya, as well as the Kashi-Viswanath corridor in Varanasi. In June last year, Mirzapur DM Praveen Kumar Lakshkar had dispatched the first consignment of pink sandstones from Mirzapur to Ayodhya for the Ram Temple. Earlier, sandstone from these mines was used in Lucknow’s Elephant Park, built by the Mayawati government. Media reports indicate the old Parliament building and the structures around the Ashoka Pillar in Delhi also used pink sandstone from Mirzapur.

These hills, mined to beautify idols and temples, are ironically putting a heavy cost on the environment and the health of local villagers.

Middle-aged Alauddin Ansari, who lives near the hills, says, “The blasts that start around noon and continue throughout the day, are so powerful that our houses tremble, and children wake up in fear.”

Due to the blasting, cracks have  appeared in houses nearby. “I had built a new house in 2016, but now there are cracks all over,” says Vinay of Sonpur village, located near the Kaimur range. 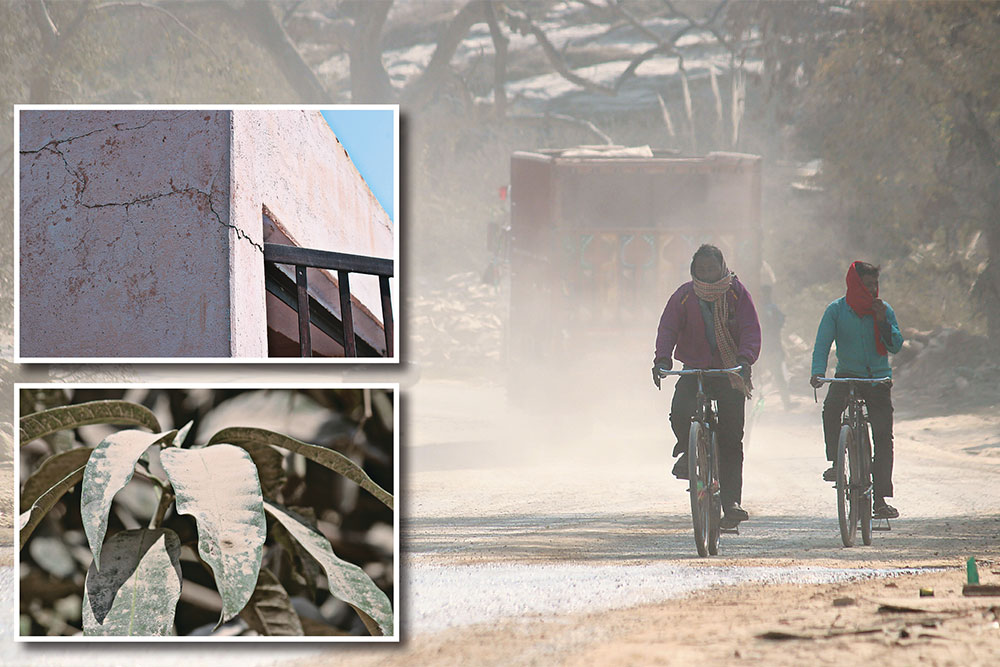 The way to dusty death Haze from dust near a mine; (inset, from top) crack in a wall in Sonpur; dust covers trees and plants across Sonpur. Photographs: Pratik Mahant

After blasting, large stones are carried to the 150-odd crusher plants built near the hills, where they are cut by continuous watering, using groundwater extracted with pumps. Not only has this rapidly lowered the groundwater level of the area leading to scarcity of potable water, with the loss of greenery due to the mining activities, groundwater recharge has also fallen significantly in the last few years.

“Earlier, we used to hit an aquifer after digging only around 40 ft, but now, we need to dig 70-80 ft. Many tubewells will have dried up comple­tely in summer,” says Shubham Singh, an une­mployed graduate youth of Sonpur village.

Ranu Kumar Singh of the same village, who joined a nearby college as a lecturer in Geogra­phy last year, says, “The reckless mining has aff­ected drinking water in two ways. Firstly, gro­u­­ndwater is being exploited for cutting stone in more than 150 crusher plants. Secondly, due to the loss of greenery over the mining area of 10 sq km, rains are not recharging groundwater. As a result, there is acute shortage of drinking water in the surrounding villages during summer.”

He adds, “Since water is poured on the stone while cutting, fine stone particles mix in that discharged water, which is later used to irrigate nearby agricultural fields. Together with airborne dust particles from the cutting and transportation of these stones, it destroys soil fertility in the area.”

Vinay of Sonpur says, “Fertility of a five cottah plot on the roadside has already been lost due to this dust. I had to plant teak plants there.”

In the Kaimur range, mining is not new. It was done earlier too, but on a smaller scale, that did not involve blasting. All this changed after Bahujan Samaj Party (BSP) won in 2007 and Mayawati became chief minister of UP. She started promoting Dalit pride and identity by creating mega projects worth crores of rupees, including the Elephant Park, Ambedkar Park, etc. This increased the demand for pink stones, and the government started leasing Mirzapur’s Kaimur range to big companies, who mined ind­iscriminately. It kept intensifying with successive governments. Locals claim the activity reached fever pitch, accompanied by use of blasting, after BJP came to power in 2017.

Manish Pandey, another Sonpur local, says, “Earlier, workers used to mine stones with small machines. There was no blasting at all, so there was less harm to the environment or agricultural fields.” Pandey, who launched a campaign against indiscriminate blasting and mining, was soon arrested. “I was arrested in a fake illegal mining case,” he says.

Due to the daily blasting, locals fear the worst. The reason is the Jargo dam across Jargo river, which irrigates 50 nearby villages. Ranu says, “Due to the blasting, the dam is weakening. We fear it may collapse anytime and submerge dozens of villages.”

The gunpowder smoke released by the blasting also endangers the health of people in dozens of nearby villages. Sadhana Chaurasia, head of Department of Energy and Environment at Mahatma Gandhi Chitrakoot Gramodaya Vishwavidyalaya, says, “Gunpowder has sulphur and phosphorus, which cause severe health issues. Dust particles released by stone mining and crushing cause asthma, silicosis and lung-related issues.”

Another major impact of the blasting is on pregnant women. “These blasts cause tremors which may result in miscarriage. You will find more cases of miscarriage in areas nearby blasting zones,” says Chaurasia.

Despite all these deleterious effects of the mining, there are few protests against it on ground. This is probably because mining provides employment to many locals, and hunger trumps all other concerns.

ALSO READ: Why Statues Of Dogra Kings Are Political Fodder For Kashmiri Politicians

Qayum Ansari works in the mine, earning Rs 300 a day. “Our employment is entirely dependent on stone mining. This is how the family runs,” says Ansari. The job also entails immediate physical risks, but for people like Ansari, it is a compulsion. “If you don’t pay attention during blasting, rocks can fall on you. If you don’t pay attention during crushing, you can dismember your hands. And if you are not careful while climbing the hillside, you can fall and get injured,” says Ansari, who has just finished the lunch he brought from home.

In 2020, negligence led to the deaths of three children, who drowned in a pond left behind by the quarrying, following which the district aut­hority canceled the lease of the company and suspended mining for some time. Qayum’s brother Liaquat Ansari remembers the time, saying, “With mining suspended, I had to carry bricks and sand at a construction site for a few months. I only returned to a proper job after mining resumed.”

Thousands of labourers like Liaquat do not want the mining to stop. “The hills are our only source of employment. If this stops, it will have a huge impact on us. We don’t want mining to stop. If they have to do so, the government should first ensure that we get some other work,” Liaquat says.

Other locals said if the government wanted to continue mining here, it should allow it without any blasting. But with the demand for religious idols and temples at an all-time peak, there is little hope of change.