UP Election 2022: Which way is Raja Bhaiya likely to tilt as he decides to contest 17 seats without coalition? 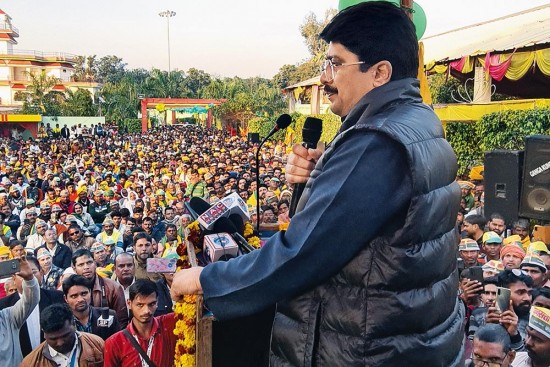 October 20, 1997. It was around 2pm when a car carrying Kalyan Singh—who was the chief minister of Uttar Pradesh till just a day before—stopped at the Bhadri House on Luc­know’s Najaf Shah Road. Singh was accompanied by Laxmikant Bajpai. The two had arrived to meet Raghuraj Pratap Singh, the MLA elected from Kunda. This young leader, all of 29 years of age then, wielded the power to secure the CM’s post for Kalyan Singh again. The tall man, who loved to wear dark glasses and was a fan of expensive cars and horse-riding, was dubbed Toofan Singh (Mr Storm) by some, while others had started addressing him as Raja Bhaiya. Over the previous few years, his royal swagger had become popular with people. With each electoral win, Raja Bhaiya’s stature and margin of victory kept growing. From different parts of UP’s Pratapgarh and Allahabad districts, people started coming to him to resolve their disputes instead of going to court. Raja Bhaiya’s court would deliver instant justice.

However, the true extent of Raja Bhaiya’s power became apparent only in 1997. A BJP-BSP coalition was in power in the state. The two parties had agreed on a power-sharing formula based on the CM post alternating between the parties every six months. However, Mayawati refused to give up the post after six months. Later, she resigned under political pressure and Kalyan Singh was sworn in as CM in September 1997. But within a month, Mayawati withdrew support on October 19 and the government collapsed. In order to regain the throne, Kalyan Singh needed to prove a majority in the assembly. BJP leaders started negotiations, and Kalyan Singh claimed to have secured the majority support, and on October 21, governor Romesh Bhandari asked Singh to stand a floor test.

Twenty-two MLAs from the Congress and 12 from BSP were ready to offer support to the BJP. The UP assembly session began at noon on December 21, but as soon as speaker Keshari Nath Tripathi sat down, Congress leader Pramod Tiwari rushed to the middle of the House and started shouting about his party MLAs being enticed, protesting against authorising them to vote. This encouraged an uproar from the BSP bench too, and soon the House had turned into a battlefield. The MLAs picked up microphones and started hitting each other. Slippers and chairs were thrown about. Senior BJP leaders, Kalraj Mishra and Lalji Tandon, were injured and bleeding. Mulayam Singh Yadav’s brother, Shivpal, was also beaten up. In this pitched battle that lasted about 20 minutes, the opposition seemed to have gained the upper hand. However, later the BJP broke through in both the tussle and the challenge to prove a majority. Kalyan Singh received 222 votes. 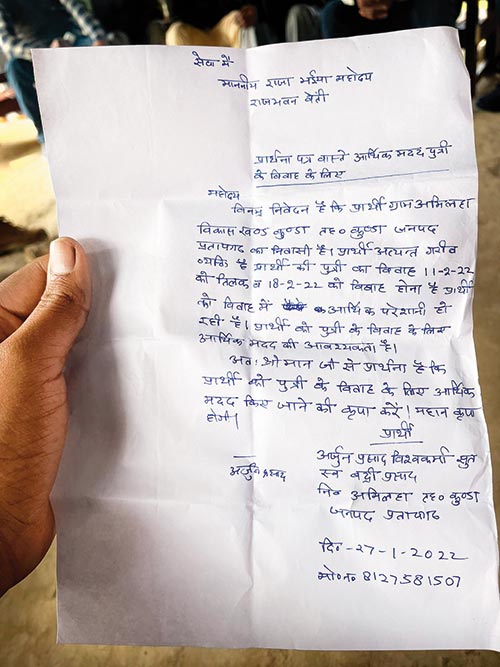 Man for all seasons A letter written by a citizen seeking Raja Bhaiya’s help.

Raja Bhaiya had allegedly orchestrated the defection of several Congress and BSP MLAs to regain power for Kalyan Singh and the BJP.  This earned him the enmity of Mayawati. In the 2002 assembly elections, Mayawati again formed the government with the help of the BJP—she assumed office as CM on May 3, 2002. Almost exactly six months later, Raja Bhaiya was arrested from his house at 4 am on November 2, 2002. He was accused of threatening to kidnap and kill BJP MLA Puran Singh Bundela. Later, Raja Bhaiya was even declared a terrorist and booked under the Prevention of Terrorism Act (POTA). His father, as well as his cousin Akshay Pratap Singh, were also imprisoned.

People recall that after Raja Bhaiya was jailed, the Samajwadi Party held a sit-in protest in his support. The protest was attended by Shivpal Singh and soon Bhaiya and SP grew close. In 2003, within 25 minutes of Mulayam Singh assuming office as CM, the POTA charges against Bhaiya were dropped. Though this order was stayed by the Supreme Court, POTA itself was revoked as a law in 2004. After he was released from prison in 2005, Raja Bhaiya was made a cabinet minister in the Mulayam Singh government and given charge of the food and civil supplies department. After another term for Mayawati in 2007, the SP again came to power in 2012 and once again Bhaiya got a berth in Akhilesh Yadav’s cabinet, with the same portfolio.

However, on March 2, 2013, senior police officer Zia-ul-Haque was murdered in a village in Kunda. The wife of this deputy superintendent of police alleged Raja Bhaiya’s hand behind the murder and lodged a case against him. This forced Bhaiya to resign from the cabinet. A CBI enquiry was launched. On August 1, 2013, the CBI gave a clean chit to Bhaiya in its controversial final report. Two months later, on October 11, he was re-inducted in the cabinet.

In these polls, Raja Bhaiya’s party has not formed an alliance with any party. It has decided to contest alone in 17 seats in Uttar Pradesh.

The year 2018 was a landmark for Raja Bhaiyya and UP politics. In the Rajya Sabha polls, he voted for the BJP candidate despite promising to back the SP. This was because the SP was supporting the BSP candidate in the elections, and Bhaiya did not want to vote for his bête noire Mayawati. After this, Akhilesh Yadav and Raja Bhaiya started to grow apart.  In November, Raja Bhaiya held a rally in Lucknow’s Ramabai ground and launched a new party, Jansatta Dal (Loktantrik). When asked about the need for a new party, Bhaiya said that at an event marking 25 years in politics for him, he had asked people whether he should form his own party, and that supporters had backed this idea. Although senior journalist Qubul Ahmed, who has tracked UP politics very closely for several years, says that Bhaiya did not have many options left—he felt betrayed by the BJP, did not get along with Akhilesh, had an old feud with the BSP and the Congress did not have a visible future in the state. It was a logical step for him to stay relevant in the state’s politics. Vinod Saroj, a three-time MLA from the Babaganj seat—adjacent to Kunda—is also with Raja Bhaiya. The more seats his new party wins, the closer Bhaiya would be to a ministerial berth.

In the 2019 Lok Sabha polls, the Jansatta Dal fielded candidates from Kaushambi and Pratapgarh seats but lost both by huge margins. For this assembly elections, the party has not formed an alliance with any party till this story went to press, and has decided to contest alone from 17 seats. 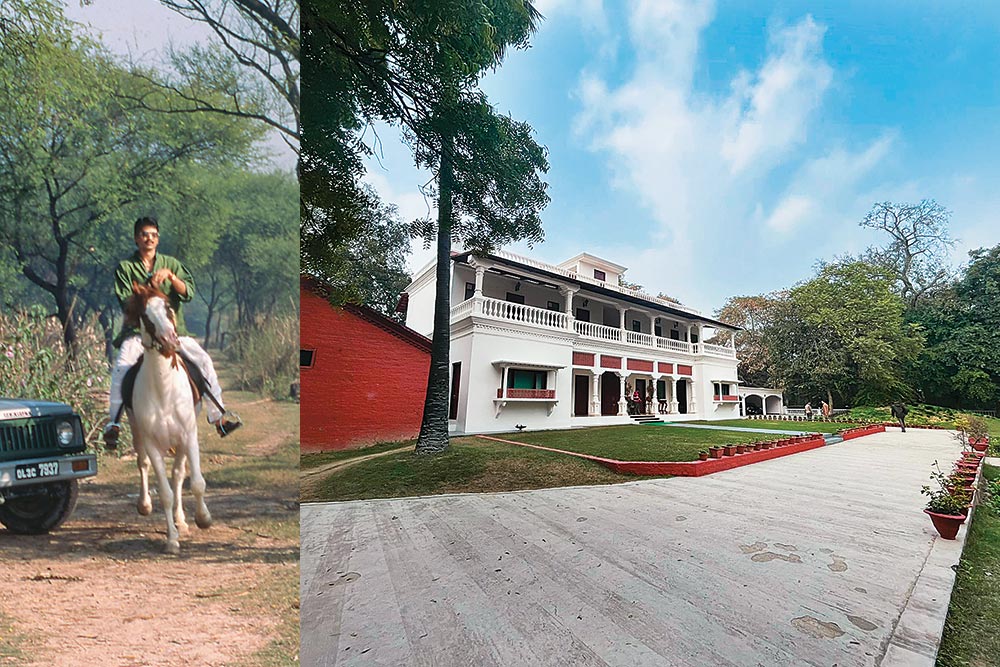 For the first time in 20 years, the SP has also fielded a candidate against Bhaiya. As a sign of how wide the divide between Akhilesh and Bhaiya has grown, the former refused to even recognise the once-powerful leader. In November 2021, just before the UP poll campaign officially began, Akhilesh Yadav had visited Pratapgarh. When a journalist asked him the reason behind his displeasure with Raja Bhaiya. Akhilesh replied bitterly, “Who is he? Why are you mentioning this name?” Responding to Akhilesh’s snub, Bhaiya said: “This is the land of Avadh, known for its good manners and sweet words. If someone had asked (about me), Akhilesh Yadav could have given a straight, single-line answer. His language has not been well-received by the people here.”

Over the past few years, Raja Bhaiya’s words and actions have given enough indications of his tilt towards the BJP. After the 2018 Rajya Sabha polls, Bhaiya had even met UP chief minister Yogi Adityanath, setting off rumours about a possible ‘big announcement’. Though Bhaiya formed his own party later, he has been openly supporting the central government’s decisions, such as the withdrawal of Article 370, implementation of CAA-NRC, and the farm bills. Asked about growing inflation and unemployment, he had said that the government cannot provide employment for everyone, and people would have to move towards self-employment. This is in line with Prime Minister Narendra Modi’s ‘atmanirbharta’ (self-reliance) stance.

Qubul Ahmed weighs in on the reason behind Bhaiya not joining the BJP. “Undoubtedly Raja Bhaiya has a powerful presence in the state’s politics. He is widely popular among the Savarnas, especially in the Thakur community. However, it is also a reality that his image is that of a muscleman. Inducting him in the BJP would have led to questions on the Yogi government’s self-proclaimed policy of ‘zero-tolerance’ against criminals.”

When asked if he considered himself a ‘bahubali’—strongman—Bhaiya says that the leaders who do not have strength in their arms are of no use to the society. “But that power should be used in people’s interest, not to harass them. I have faced all the cases lodged against me in court. All the charges were politically motivated. Today, I just have one case pending against me, and that too, related to a sit-in protest. The media says that nothing can happen in Pratapgarh without Raja Bhaiya’s blessing. This is not true at all. Words like ‘bahubali’ and ‘dabang’ have been picked up from films.”

On the question of who they would support in a possible alliance after the UP elections, the national general secretary of Jansatta Dal (Loktantrik), Dr K.N. Ojha says: “Who the party will align with will only be decided after the election results. Right now, we are focusing on sending the maximum possible number of candidates to the assembly.” He shows a paper and adds: “Look at this, others make calculations based on caste and religion, but in Raja Bhaiya’s darbar (court), people from all castes and religions come with their problems. He organises mass weddings every year, helps with medical treatment, resolves domestic and land disputes. Everyone is equal before Raja Bhaiya’s eyes, and the party has the same outlook.”

Journalist Sunil Yadav, a keen observer of Pratapgarh’s politics, says that “Raja Bhaiya is directly in touch with the common people, and that is what separates him from other MLAs. People like his Robin Hood image, and that is why mere caste equations do not work in the Kunda constituency. There are just around 15,000 Thakur (Rajpoot) votes in Kunda, and Muslims, Yadavs, Dalits and Brahmins play a decisive role. It is probably with these equations in mind that Akhilesh Yadav has given a ticket to Gulshan Yadav, who was once close to Raja Bhaiya. But the most that this can do is reduce Bhaiya’s victory margin. Last time he had won with a margin of over 103,000 votes.”

(This appeared in the print edition as "The Kingmaker?")