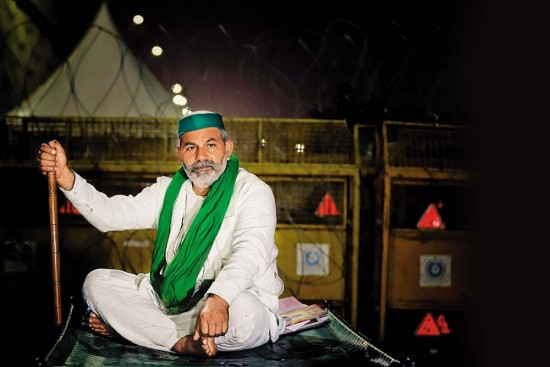 The Tikaits stay in a spacious house in Sisauli, near Muzaffarnagar. Cows and buffaloes are tied to a stake at one end of a large open area; several vehicles bearing the flags of Bharatiya Kisan Union (BKU) are parked nearby. Visitors who throng the Tikait residence help themselves to a hookah placed between two charpoys and several chairs. Close to the courtyard is the baithak, a large room with 11 charpoys, where visitors coming from afar can rest. The large room has a huge cutout of Mahendra Singh Tikait, the founder of BKU who died 10 years back. At the far end of the room rests his smaller, garlanded photo.

The Samadhi of Mahendra Singh Tikait, at a short distance from the house, is installed with statues of not just the deceased farmer leader but also of Chaudhary Charan Singh and Sardar Vallabhbhai Patel.

“I wanted to join the army. I played kabaddi and hockey in my younger days. However, when I could not join the army, I joined the Delhi Police,” says Rakesh Tikait, younger son of Mahendra Singh Tikait and the national spokesperson of the BKU. “However, being in the police was at odds with the purposes of the Bharatiya Kisan Union, which was protesting in Delhi those days. So, I quit the police and found my calling in farmers’ struggles,” he adds. After spending a few days at the farmers’ protest site near Ghazipur border, Tikait was heading back towards Lakhimpur Kheri on October 11, when Outlook engaged him in a conversation.

ALSO READ: This Election Season In UP, Lakhimpur Kheri Is The New Political Battlefield

Rakesh Tikait has been at the centre of the two big moments in the ongoing farmers’ protests this year. The first was on the eve of January 28, when his emotional outpouring reinvigorated the movement against the three farm laws almost overnight. The second happened last week, when his intervention (and the eventual settlement reached with the government of UP) is said to have brought a very tense situation under control after four farmers were mowed down by a car allegedly driven by Ashish Mishra, the son of Union minister Ajay Kumar Mishra, in Lakhimpur Kheri. 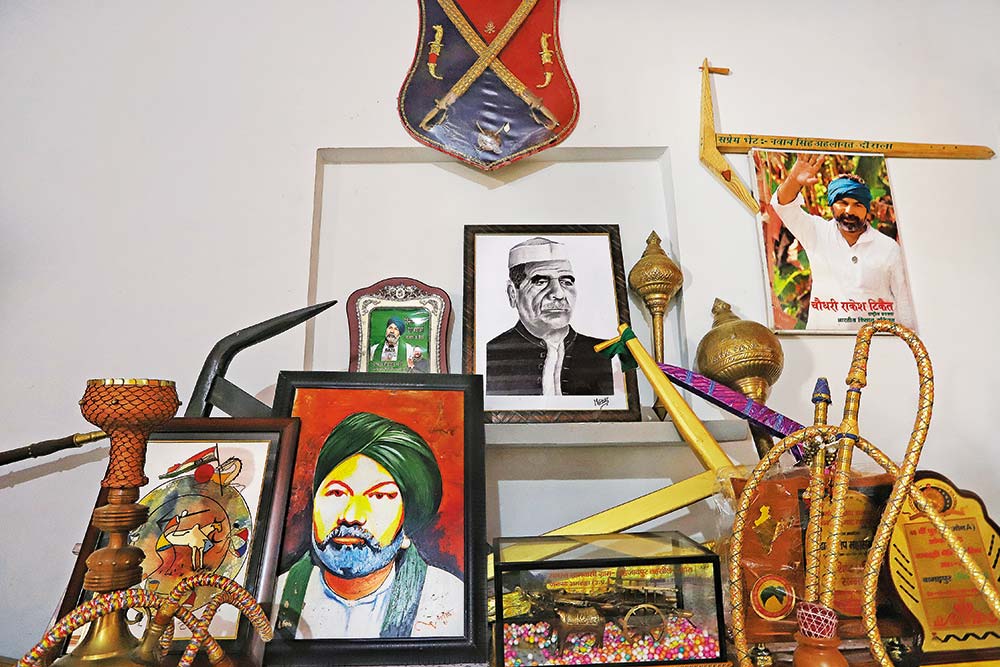 A room at the Tikait residence in Sisauli, Muzaffarnagar

For Tikait, the matter hasn’t ended with the UP government agreeing to award compensation to the families of the deceased farmers. “We want Union minister Ajay Kumar Mishra to be sacked so that he can also be arrested,” Tikait said, adding, “On October 24, we will collect the ashes of the slain farmers and send them across the country. And on October 26, we will hold a kisan mahapanchayat at Lucknow.”

Tikait comes from a clan (khap) of Jats called the Baliyan khap. It is the largest Jat khap of Uttar Pradesh and is spread over 84 villages. Khaps are exogamous and claim descent from a common ancestor. The head of a khap is the hereditary chaudhary, upon whose death his eldest son takes over as the chaudhary of the khap. After the death of Mahendra Singh Tikait, his eldest son Naresh Tikait became the Chaudhary of the Baliyan khap. Rakesh Tikait is his younger brother. The joint family has four brothers, all of whom live at the Tikait residence in Sisauli.

Rakesh’s younger brother Narendra Tikait shares a legend about their surname. “Our ancestor, the then chaudhary of Baliyan khap, had helped King Harsh Vardhan in a battle. The king was so impressed with the valour of the Baliyan khap that with his own blood he applied a tilak on the forehead of the chaudhary. Since then, our family has been known as the Tikaits.”

Rakesh Tikait leads me to a room on the ground floor once used by Mahendra Singh Tikait. The austerely furnished room has a large photograph of the late farm leader. “This flame,” he says, pointing to a flame burning below the photo, “was lit by my father in 1987. It burns till today. People come and gift us desi ghee, which is used to keep this flame alight.”

On the night of October 3, when none of the other leaders of the Opposition were being allowed by the police to reach Lakhimpur Kheri, Rakesh Tikait reached the spot. By the following afternoon, he had reached an agreement on behalf of the families of the four deceased farmers with the state government. The terms of the agreement were: an FIR against the minister’s son Ashish Mishra, Rs 45 lakh and one job each to the families of the deceased, and Rs 10 lakh for the injured. Ajay Kumar Mishra has denied that his son was present on the spot when the incident happened. 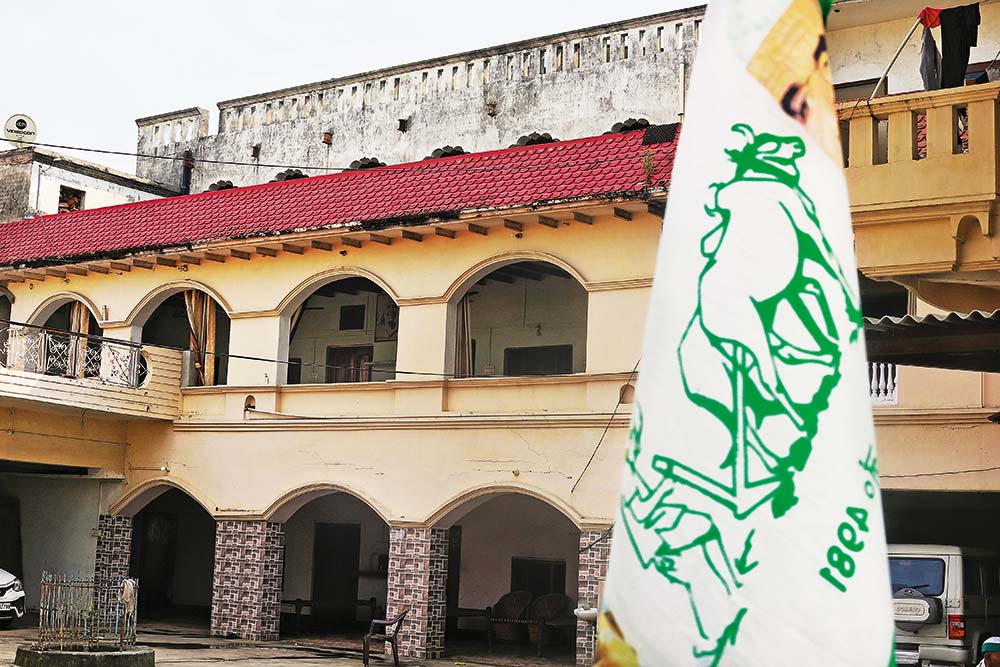 Violence had flared up soon after the incident, with protesting farmers allegedly lynching three people, including BJP workers and Hariom Mishra, the driver of the Union minister. Later, the body of a journalist was also found on the spot, pushing up the death toll to eight. Tikait talked to the families of the slain farmers and convinced them to accept the offer negotiated by him. He also pacified the restive crowd of farmers and ensured that the crisis did not deepen. Tikait admits that the Uttar Pradesh administration seemed intent on negotiating with him and adds that, as a man who has inhered the culture of the khaps, he believes in raising his voice for his rights. He has not budged an inch from the demand which ignited the farmers’ protests though. “They will have to take back the three farm laws. We are not going to flinch,” he says determinedly.

Tikait is austere and disciplined in his daily routine. he gets up at 4 every morning, eats only home-cooked food, doesn’t watch movies or dine out.

People present in the house, including Narendra Tikait and some visitors say Rakesh Tikait is austere in his habits and disciplined in daily life. “My brother gets up at 4 am every morning and prays. He is a devotee of Lord Shiva,” says Narendra Tikait. “The secret of his efficiency is that he is quick at making decisions and does not waste time.” He adds that his elder brother Rakesh eats only home-cooked food, doesn’t watch movies and never dines in hotels. Rakesh, he says, stays away from spicy and oily food, and avoids cold drinks. An elderly farmer sitting next to Narendra Tikait says that Rakesh dissuades people from smoking in closed rooms. “Once I smoked inside a room in which he was also present. He told me that I had spoiled his day,” the farmer says, his cheeks lined with wrinkles as he breaks into a smile.

Asked to react to this portrait of himself, Rakesh Tikait says,“Usse kaho photo khinchwayega aur patrakaron se zyaada baat karega to kheti na ho paayegi (tell him that if he gets his photos clicked and talks to journalists too much, he won’t be able to do farming).”

The last two decades had seen a decline in the fortunes of the BKU, after much hype around Mahendra Singh Tikait’s ability to mobilise farmers. However, the present farm agitation has come as a shot in the arm for the BKU and in particular for its most visible face—Rakesh Tikait. After the violence that unfolded in the capital on January 26, farmers had begun to leave the protest sites around the capital. But a viral video of Tikait breaking into tears brought life back into the movement. Farmers from all over west UP started arriving at the protest site the next day.

“His father used to be covered by Amar Ujala and Dainik Bhaskar. He will now be covered by Time magazine,” chuckled a UP official, referring to Tikait, who has in the past gone to jail multiple times on farm-related issues. “He may have lost elections on his own, but he doesn’t need to contest now. He will try to become the kingmaker now,” the official added.

Rakesh Tikait has a raw sense of humour. He has also demonstrated an ability to mobilise people as well as to restrain them when the need arises. These abilities make Tikait not just the face of the farmers’ movement but also a key interlocutor the government can turn to in times of crises.

(This appeared in the print edition as "The Negotiator")