As the murder at Singhu border put the Nihangs in news, the warrior creed thrives at the symbol-laden chhaonis. Their austerity, discipline and martial history evoke both respect and fear. 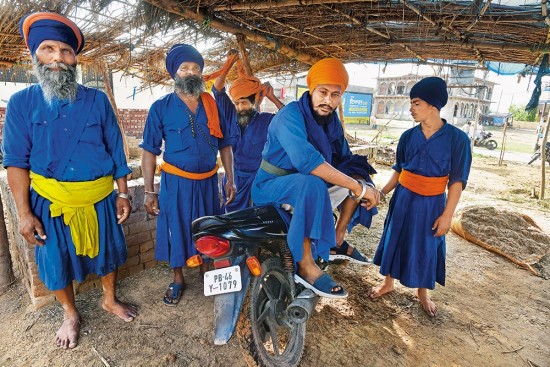 He will dream of armies and he thinks in lakhs. If he is alone he will say, ‘a-lakh-and-a-quarter Khalsa are present’. You ask him how he is, he will reply, ‘the army is well’. For him, hunger is intoxication, a miserable pony an Arab or Iraqi steed…and dying would be proceeding on an expedition.

– ‘Nihangs’, a section in the Encyclopedia of Sikhism, edited by Prof. Harbans Singh and published by Punjabi University, Patiala

Days after a man was lynched at the Singhu border between Delhi and Haryana by a Nihang for alleged desecration of the Guru Granth Saheb, I step out of the gurudwara at Bakala in Amritsar district, wondering where to find the famous Baba Bakala Saheb, the chhaoni (cantonment) of the Taruna Dal, one of the main Dals (forces) among the Nihangs, or Nihang Singhs, who see themselves as Guru ki Fauj (the army of the Guru Gobind Singh).

I take a left into a narrow lane that ends in Baba Bakala Saheb gur­udwara. The place isn’t crow­ded. I can see some Nihangs in their loose, electric blue attire, with their dagger, sword and blue turb­ans. Inside the gurudwara, a tall pole is draped with a dark blue cloth, with a dagger atop pointing skywards. This is the Nishan Saheb, the flag of the Khalsa, which stands tall in all Nihang habit­ations.

It is an austere place. To the left a small langar (community meal) is on. Jarnail Singh, in a blue turban and a white kurta, invites me in. “I have been coming here from my village nearby for the last 25 years,” he says. “I wanted to know more about the Nihang Singhs,” I say. He answers, “Whatever people may say about them, they are the knights of Guru Gobind Singh. They have always protected the poor. Look at the langar here. You will find only poor people eating.”

The Nihangs retain their aura in rural Punjab. From history to legend, tales of the Nihangs’ martial prowess abound. Their austerity and renunciation of material gain are res­pected. Yet, people are wary of them; their residential camps are not well frequented by visitors, unlike other gurudwaras. “Avoid visiting the Nihang Singhs,” the cab driver had warned me. He kept quiet when asked why.

However, an old Nihang at the Gurudwara is pleased at the sight of a non-Sikh having visited from Delhi. He offers tea in a bowl, not permitting me to wash it myself. “You have come from far. I can’t allow you to wash your bowl,” he says.

Though their austerity and renunciation of material gain are respected, people are wary of the nihangs. their camps are not often visi­ted, unlike other gurudwaras.

I request to be taken to the Nihangs’ residential camp nearby. He promptly calls a young Sikh man and asks him to take me to the camp. Our cab follows the man’s motorcycle through a crowded, narrow road, till we reach a large open space. There are large, empty plots of land on both sides. On a large empty plot to the left, impressive-looking horses are tethered to staves. On the plot to the right, cows and buffaloes are being tended to. There are three tall Nishan Sahebs on poles draped with deep blue cloth. On one plot are tents that house the reclusive Nihang Singhs. They let their photographs be taken, caring little as the camera clicks them.

Horses. Cattle. Hawks. These are the three animals one finds at Nihang camps. The Nihangs travel long distances on horseback. A large group of Nihangs from nearby Amritsar is journeying to Nanded in Maharashtra on horseback for the Dussehra-Diwali festival season, says a Bakala Nihang, Baba Khadag Singh.

“Etymologically, the word ‘nih­ang’ is traced back to the Persian nih­ang (alligator, sword) or to the Sanskrit nihsanka (fearless, carefree). The word could also be a modified form of nisang, often used in Sikh scriptures to mean nirlep (unsmeared, sinless, not attached to anything),” says the chapter on Nihangs in the Encyclopedia of Sikhism edited by Harbans Singh.

The main centre of Nihang activity is Anandpur Saheb, the birthplace of the Khalsa. In March each year, they gather there in large numbers to celebrate Hola Mohalla, a Sikh festival. The celebrations involve processions of Nihangs on horseback and on elephants with weapons. They also display their skills in using them in mock duels.

There are various stories about the origin of this martial order. One is that Guru Gobind Singh’s infant son, Fateh Singh, appeared bef­ore him in a deep blue chola (dress) and a large, blue, plumed turban, making the Guru remark that this should be the dress of the Akalis, the soldiers of God. Another is that after his escape from Chamkaur—the battle of Chamkaur Saheb was fought in 1705 between the Sikhs and Mughal forces led by Wazir Khan—the Guru donned a blue dress as a disguise. He burnt it on reaching Dhilvan, near Kot Kapura, but his att­endant Man Singh saved a small piece of the blue cloth and stuck it on top of his turban. Another version is that Naina Singh Akali of the Nishananvali misl (Khalsa fighting unit) introduced a tall, plumed, turban, which later bec­ame the Nihang attire. 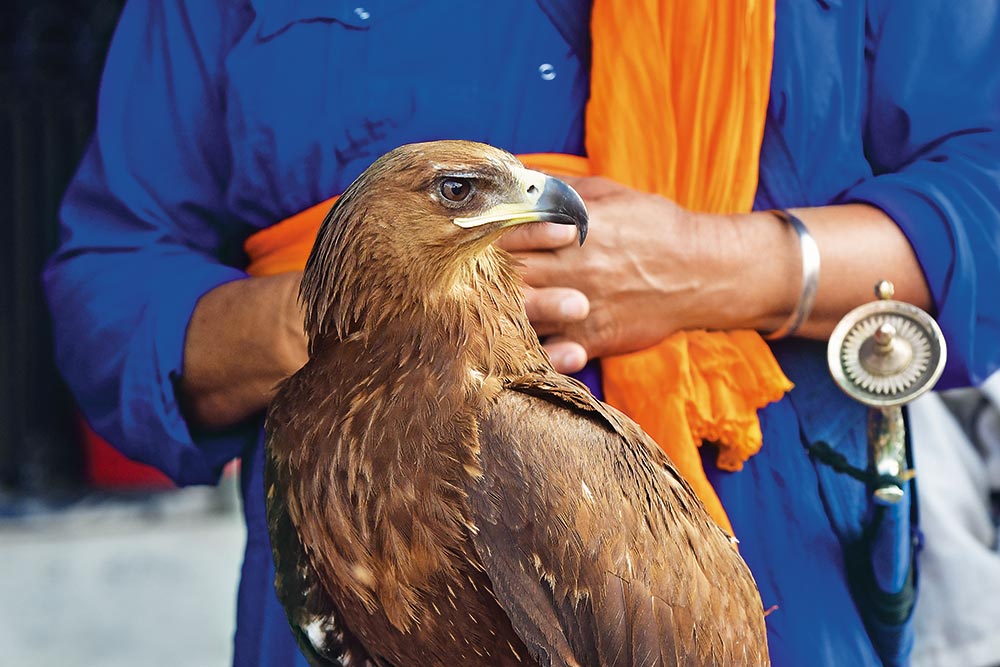 A Nihang with a hawk, a symbol of Guru Gobind Singh

Tyagi Mohan, who teaches Punjabi language at Punjabi University, says Nihang legends are the stuff of folklore. He recalls a saying in Punjabi about the oppressions endured by common people in a land that lay across the path of invaders: Khaata Peeta Laahe Ka, Baaqi Ahmad Shahe Ka (What you can eat today is your only gain; the rest belongs to Ahmad Shah Abdali). Mohan adds a saying about the Nihangs in those times: Aayen hain Nihang; Bua Khol do nisang (the Nihangs have arrived; throw open your doors without fearing for your families). “This is how Punjabi folklore celebrates them. The message is that during times of invasions, one’s family was safe when a Nihang came calling.”

When, in the latter half of the 18th century, Sikh misls became self-aggrandising, argues the chapter in the Sikh encyclopedia, Akali Nihang bands, still austere, continued to renounce power. This offered them a rare prestige and aut­onomy even when Maharaja Ranjit Singh founded the Sikh kingdom. Impressed by their valour and discipline, the Maharaja made them join a special wing of his army, as they would not agree to being paid soldiers. These Nihang sections were involved in daring action in the battles of Kasur (1807) and Nowshera (1823) and the campaigns of Multan (1818) and Kashmir (1819). Nihangs, though, faced persecution under the Mughals and during British rule, says the encyclopedia.

The killing of a Dalit man by a Nihang at the Singhu border, the site of the ongoing farmers’ agitation, has attracted bad publicity, Tyagi Mohan agrees, but says such elements do not come from established Nihang Dals. “There are only a few main Dals of the Nihangs: the Buddha Dal, the Taruna Dal, the Hariyan Velavale and the Bidhi Chandeen. They follow the Nihang code of conduct,” he asserts. “But there are some miscreants who don the deep blue robes, do not follow the code and engage in violence. The Singhu border incident is one such instance. It isn’t the Nihang way.”

What is the Nihang code of conduct? They rise early in the morning and recite nitnem (daily prayers), which include banis from Guru Granth Sahib, the Dasam Granth attributed to Guru Gobind Singh and the Sarab Loh Granth, which depicts the fight between good and evil, and between the all-steel incarnation of God and Brijnad, the king of demons. They recite with passion Guru Gobind Singh’s Chandi Di Var, describing the battle between the gods led by Goddess Durga and the demons.

They tend to their horses and offer seva (service) assigned to them by the jathedar or leader. They also tend to cattle. Nihangs abhor smoking; they eat meat, but are supposed to slaughter the animal themselves and not buy meat from the market. All their weapons and utensils are of steel.

Tyagi Mohan says that they also devised a code language that many can’t understand. Citing examples, he says Nihangs call a train bhootni (fem­ale-ghost) and a bidi, which they despise, khoti (female donkey or jenny).

How does one become a Nihang? People say that some join Nihang orders of their own volition and some parents send a child to become a Nihang, particularly if they had children late in life and had vowed to send one child to serve the Khalsa if they had kids.

If there is a saying that one Khalsa is equal to sawa lakh (1,25,000)—a popular saying among Sikhs—the Buddha Dal of Nihangs is called 96-karori (an army equalling 96 crores).

Nihangs have been involved in controversy in the past too, says Tyagi Mohan. “When the Akal Takht was blown up in Operation Blue Star in 1984, many Sikhs were against reconstructing it themselves, as they thought the onus should lie with the government that blew it apart,” he rec­alls. “Baba Santa Singh of Buddha Dal of Nihangs got it rebuilt, something that many Sikhs did not like.”