Prestigious tests like JEE and NEET have been breached. A few lakh of rupees can get you an engineering or a medical seat. 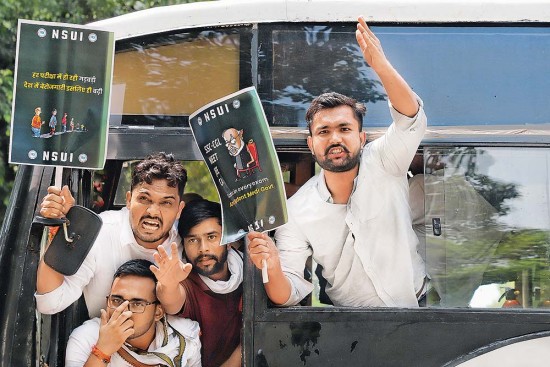 When the CBI raided a few places after the fourth session of JEE (Main) earlier this month, it became clear that examinations going online hasn’t put scamsters out of business. When online examinations were introduced, it was said cheating, or for that matter, impersonation, would be impossible as question papers were not printed on paper. Experts, after all, prepare a bank of questions and software algorithms select the final ones. The question paper is encrypted before being sent to test centres and only the candidate can access it when taking the test. There are multiple question papers and nobody knows which one would be allotted to a particular examinee. Still, as the row over recent JEE (Main) and NEET exams suggest, exam-riggers can easily subvert the system even from distant places, at times without bothering to hire any ‘Munna Bhai’ to impersonate an examinee. In fact, digital-era technology seems to have made it easier. During investigations, CBI sleuths found that racketeers used the latest technology to their advantage.

Here are some of the ingenious ways scamsters have apparently devised to rig exams. At some places, special software is installed on the candidate’s computer. As soon as the computer is started, the software starts sending screenshots to a certain email account. In this way, the questions reach the solver sitting far away, who sends the ­answer after a few minutes.

During the recently held NEET, a ­medico from Banaras Hindu University was held on the charge of impersonating a girl examinee from Tripura. On investigation, it was found that photographs of both the girls were merged into one with the help of an app to evade ­detection by the invigilator.

Tarun Pithode, an IAS officer who ­conducted the investigation into the Vyapam scam in Madhya Pradesh, says, “We investigated, changed the system and started online examinations, but the perpetrators keep looking for new ways. We have to keep going one step ahead of them, only then can this rigging be stopped.”

Dr Anand Rai, whistleblower of the Vyapam scam, considers online ­examination to be the most susceptible to manipulation. “It is very easy to leak the questions,” he says. “The scams are ­difficult to investigate later, as the data is deleted from the servers. Even if the ­perpetrators are caught, it is difficult to prove them guilty.”

This year, a few days before the third session of JEE (Main) was to be held in July, Patna resident Ritesh Jha (name changed) received an unusual call. “Do you want your son to join any top NIT (National Institute of Technology) of your choice?” the caller asked. “We ­ensure admission to all the top government and private engineering colleges. If you are interested, your ward has to fill the form under our guidance.”

When Jha said his son had already filled the form, he was told the option to edit it was still open. “He will just have to select the centre of our choice. We will do the rest.” On asking how his son would get admission to an NIT of his choice, Jha learnt he would have to pay Rs 10-12 lakh. “But we will take the money only after your ward gets admission,” the caller reassured him.

Astonished by the offer, Jha tried to probe a little more. The caller said he would ensure 99+ percentile for his ward, which would ensure his admission to any institute he chooses. Jha sought time to think about the offer, but was asked to decide before the option to change the centre ends. “We won’t be able to help you after that,” the caller said before disconnecting.

Jha received a similar call from ­someone else before the fourth session of JEE (Main). He refused to fall for the bait, wondering whether it was a prank or a scam. What he feared turned out to be true when the CBI raided 19 places across the country, ­including Delhi-NCR, Pune, Jamshedpur, Indore and Bangalore, to bust an admission racket soon after the final session of the examination. The agency arrested two ­directors and four employees of Affinity Education Pvt Ltd, a coaching centre in Noida, and some employees of a private college in Sonepat, Haryana. It also seized Class 10 and 12 mark-sheets of some candidates, and post-dated cheques of Rs 12-15 lakh issued by their parents to be credited to the alleged fraudsters.

The JEE (Main) examination is conducted online by the National Testing Agency (NTA), which was set up in 2017 and has since delegated the responsibility of the online examination to TCS ION—the largest digital assessment company in India. Experts believe 99.5 percentile can be ensured only if one gets the question paper in advance. The Congress alleged that the question pap­ers were leaked. Rahul Gandhi tweeted: “JEE (Main) Exam has been breached. Students appearing for such competitive exams prepare very hard, battling difficulties of various kinds. We, as a nation, owe them a fair exam. GOI is better at providing cover-ups.” Calling it a scam, the Congress demanded a probe under the supervision of the Supreme Court. The party said other examinations ­conducted by NTA should also be ­investigated. NTA director-general Vineet Joshi, however, denies the charges of question paper leak and ­system breach, saying it is a case of a dummy candidate taking the examination instead of the original candidate. 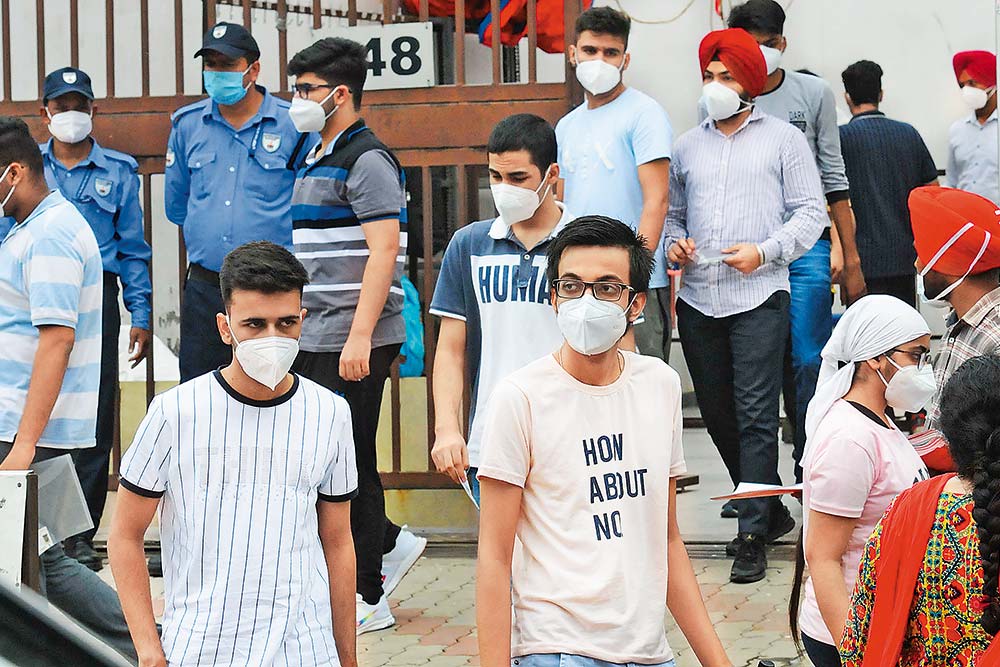 Last year, a case of impersonation had come to the fore in Guwahati. A complaint lodged against Neel Nakshatra Das, who topped Assam with 99.8 percentile, alleged that someone else had taken the examination on his behalf. On investigation, it was found to be true. Seven persons, including Neil and his ­father Dr Jyotirmoy Das, were arrested. Das had reportedly given Rs 15-20 lakh to a coaching institute, which was allegedly involved in the fraud.

So does NTA take adequate steps to prevent rigging of examinations? The agency claims that it does. According to Joshi, video analytics based on artificial intelligence is now used to monitor ­examination centres. Live video is ­recorded at these centres from 5:30 am on the day of the examination, and the software alerts the agency in case there is any suspicious movement before or after the session.

NTA has also laid down several criteria for identifying suspicious examination centres. For example, if the number of successful candidates from a particular examination centre is higher than the national average, then the centre is probed. Based on such criteria, 120 ­centres have so far been identified. Of them, 23 have been blacklisted and the rest are being monitored. Also, 419 candidates have been kept on the watch-list.

Though alleged rigging is mostly ­confined to the premier engineering ­entrance test, this year there were similar incidents concerning NEET, the all-India examination for admission to medical colleges. In Varanasi, police ­arrested Julie, a second-year student of Bachelor of Dental Surgery at the Banaras Hindu University, in a case of impersonation. Her brother Abhay and a final-year student at King George’s Medical University (KGMU) were also arrested. Julie, who was allegedly ­impersonating Hina Biswas, a resident of Tripura, in NEET was promised Rs 5 lakh by a racket operating from her ­native Bihar. The racketeers had got in touch with Julie’s family and paid an ­advance of Rs 50,000 to her mother.

In another investigation, police busted a similar racket by arresting nine ­persons, including six medical students, who were taking the examinations on behalf of others and charging huge amounts of money.

Impersonation in competitive ­examinations is surely not a new ­phenomenon. Way back in 2003, it ­inspired a Bollywood blockbuster Munnabhai MBBS starring Sanjay Dutt. The offline tests have since given way to online ones, but scamsters seem to have kept pace with the changing times, ­turning ­tech-savvy in their bid to subvert the ­examination system.

The first major case of examination scam had come to light in 2003 when the CBI arrested Suman Kumar Singh alias Ranjit Don, a resident of Khaddi Lodipur village in Bihar’s Nalanda district. The arrest was made in connection with a leak of CAT question papers. Investigation revealed that he used to run a network that leaked papers of many examinations, including medical and engineering. He spent a year and a half in prison, but lived an opulent life for years. He had many luxurious houses and a convoy of expensive cars. After being released on bail, he contested the 2004 Lok Sabha polls from Begusarai as an independent, but lost. He later tried his luck in assembly polls as well without any success. He was at one time thinking of buying a helicopter. The latest scam has proved that people like Ranjit Don are still flying high.

Scamsters use many ways to rig exams. Here are a few: