The Sangh In Poll Gear

Usually a backroom player in elections, the BJP’s ideological fountainhead leads from the front only when the stakes are high enough 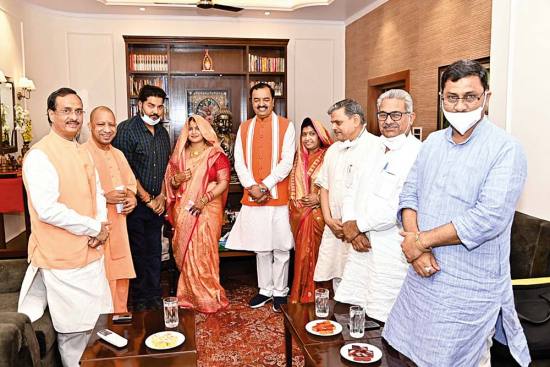 The RSS has big plans for its centenary celebrations in 2025—plans whose success depends on the BJP continuing in power after the 2024 general elections. The RSS top brass have always claimed that they lead a socio-cultural ­organisation and do not interfere in electoral politics, preferring to keep their involvement behind closed doors. However, with small bushfires of dissent burning in most BJP-ruled states and the virulent second wave of Covid-19 amplifying the rumblings within, ‘samanway’ (coordination) meetings between RSS and BJP leaders have become more frequent. While RSS functionaries were quite visible on the ground during the recent West Bengal assembly elections, their involvement has gone several notches higher in Uttar Pradesh that will go to polls early next year. “In UP, with its 80 Lok Sabha seats, the stakes are too high for the BJP and the entire Sangh parivar,” says a BJP general secretary. “The state that catapulted the saffron party to its biggest wins in 2014 and 2019. What happens in the 2022 assembly polls will set the mood for 2024. That’s why the RSS is willing to play the peacemaker role in UP.”

Whispered notes of discontent against CM Yogi Adityanath’s style of functioning—his reliance on the ­bureaucracy rather than party MLAs and ministers, his proclivity towards Thakurs with others feeling sidelined, the heavy-handed style of his administration—became louder and more public with criticism of his handling of the pandemic. In a series of meetings with BJP leaders, the RSS reportedly asked them to take care of dissensions within other state units and decided to directly handle the situation in UP.