Decades after Independence and despite its leaps in science and technology, India is yet to find an alternative for manual scavenging 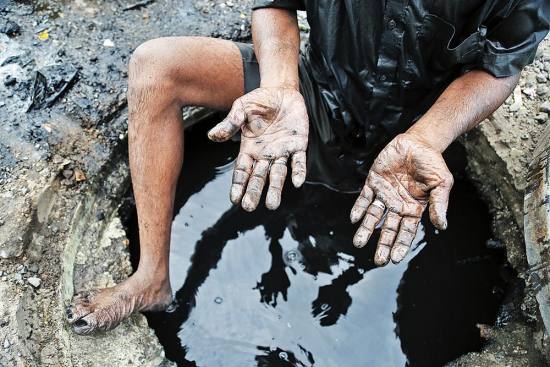 Titu (name changed) is hesitant to talk about his work. All the 32-year-old is willing to say is that he is a cleaner. In reality, Titu and many other manual scaveng­ers like him dive into sewer tanks to flush out stagnant filth inside. In the name of protective gear, all they have is a belt tied around their torso and attached to a rope. “This is the last job on earth one would want to do. We do this because we do not have an option. There are no other jobs for us in the market. Our identity as manual scavengers makes it even more difficult to seek employment in other sectors. Moreover,­ social ostracism is so strong that we even have to hide from our family members the nature of our work. If my eight-year-old dau­­ghter knows what I do for a living, she will stop eating with me,” he says.

Titus’s plight resonates with thousands of his brethren who continue to do this work that is prohibited by laws. Since Independence, the Indian government has adopted several measures and policies to end this practice. The Civil Rights Act of 1955 protects anyone from being forced to engage in manual scavenging. The Employment of Manual Scavengers and Con­struction of Dry Latrines (Prohibition) Act of 1993, and the Prohibition of Employment as Manual Scavengers and Their Rehabilitation Act, 2013 that the Indian Parliament has pas­sed, all reaffirm its commitment to eradicating manual scavenging. Further, on March 27, 2014, the Supreme Court ruled that India’s Con­­­stitution requires the government to intervene to prohibit manual scavenging and to “reh­abilitate” all those involved.

The Building and Maintenance of Insanitary Latrines Act of 2013 outlaws construction or maintenance of unsanitary toilets, and the hiring of anybody for their manual scavenging, as well as of hazardous cleaning of sewers and septic tanks. It also provides a constitutional responsibility to provide alternative jobs and other assistance to manual scavenging communities, as reparation for historical injustice and indignity.

Yet, despite these laws and periodic intervention by the courts, the practice continues to prevail today. Thousands of people at the bottom of the caste hierarchy, belonging to the SC/ST group, are compelled to do this job, attributing it to unemployment and social pressure, as well as the failure in implementing these laws by administrative bodies like panchayats in villages and municipal corporations in cities. At times, these bodies even perpetuate the practice.

“We have seen our parents doing this in the villages where we grew up. If they did not want to do it, they were threatened with being den­ied access to community land and resources, often with the support of village councils and other officials,” said 30-year-old Kulbir, a manual scavenger who lives in Ghaziabad among other people engaged in this ‘profession’. “We came to cities hoping to lead a better life, but destiny led me to where I belong,” he adds.

According to the Union social justice and emp­owerment ministry, the government possesses caste-related data on 43,797 people engaged in manual scavenging, with over 42,500 belonging to the Scheduled Castes. Responding to a question in the Rajya Sabha, Union MoS for social justice and empowerment, Ramdas Athawale, said that 42,594 (97.25 per cent) of those engaging in manual scavenging are from the SCs, 421 from the STs, and 431 from OBCs.

Untouchability and social isolation are intrinsically related to manual scavenging. The India Exc­lusion Report for 2019-20, released on Jan­u­ary 2021 by Centre for Equity Studies, has a chapter on how caste oppression is institutionalised in India’s sanitation jobs. It states, “Manual scavenging has historically been linked to caste in the Ind­ian subcontinent. The Brahminical social order assigns the most “polluting” tasks, such as removing human excreta, to Dalit castes. There is evide­nce of the same in ancient texts such as the Nar­a­da Samhita and the Vajasayeni Samhita.” 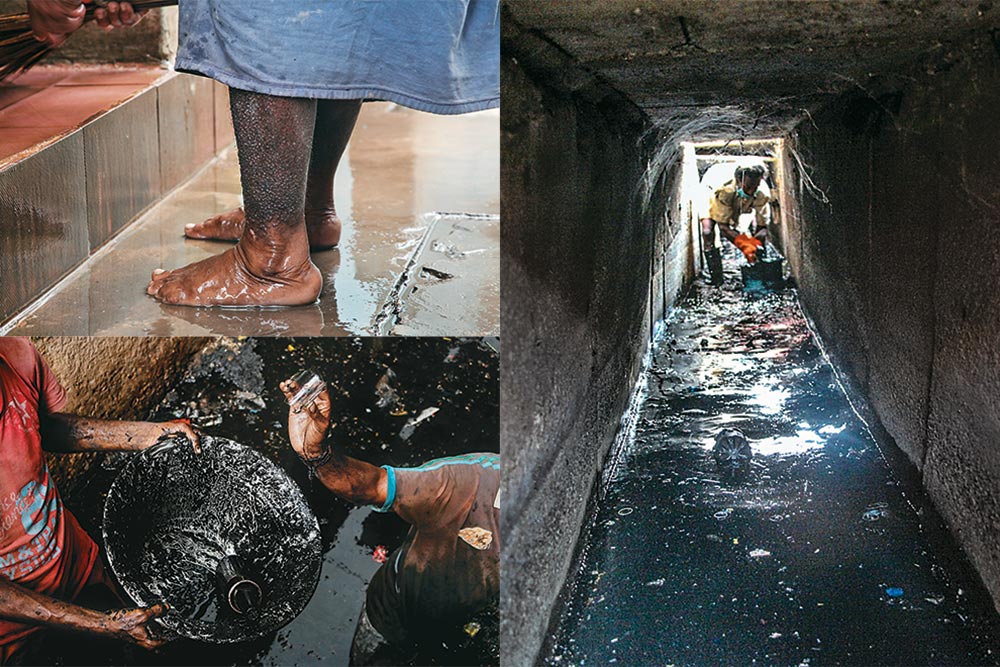 “Wherever there was a shortage of sweepers and scavengers in urban areas, municipal authorities looked to Dalit migrants from rural areas to meet the shortfall. This cemented caste oppression into a waged “occupation”. Today, in municipal sanitation jobs, there is almost an unstated 100 per cent “reservation” for those belonging to scheduled and backward caste groups,” it adds.

To meet the shortfall in urban sweepers and scavengers, municipalities looked to rural Dalit migrants, cementing caste oppression into a waged “occupation”.

Bezwada Wilson of Safai Karamchari Andolan, a NGO that has been working in this area for decades, explains: “Manual scavenging is a type of caste-based violence in and of itself, and it must be viewed as such. It is demeaning and it is put on weak people, who must make themselves even more vulnerable by stopping to do this—they not just risk retaliation but also do not have any other means to survive.”

Commenting on the rehabilitation aspect in resonance with the 2013 Act, Wilson says, “There have been no successful rehabilitation initiatives. You can’t just hand two buffaloes and some mon­ey to a woman and expect her to be content. Bec­a­use while attempting to transform 5,000-­­year-old traditions and attitudes, a complete and clear grasp of what rehabilitation and livelihood entail is required.”

“In addition, the government must work to modify society’s attitudes and behavior toward the marginalised and the manual scavengers,” he adds.

There have been hundreds of deaths all across the country because of manual scavenging. “At times, to clear a blockage in the drain, scavengers have to hold their breath and go entirely inside the sewage water without a mask. There are poisonous gasses inside the cesspool, they lose their breath while inside and sewage water enters their mouths. The health hazards of doing this are obvious,” says Kulbir.

The government has been inconsistent on the number of reported deaths due to scavenging. In July 2021, in response to a question by Congress MPs Mallikarjun Kharge and L. Hanumanthaiah in Parliament, asking for the number of deaths from manual scavenging, Ramdas Athawale had stated that no one had died. Lat er in December the same year, responding to a question by BSP’s Girish Chandra, the MoS had said, “No deaths have been reported due to engaging in manual scavenging. However, 321 people have died due to accidents while undertaking hazardous cleaning of sewers and septic tanks during the last five years.”

Commenting on the number of deaths due to scavenging, Wilson said 472 people have died during five years till 2020, adding that the count would inflate further if the 2021 figures are add­ed. Wilson also accused the Centre of “manipulating the definition” of manual scavenging, pointing out that it should not apply only to those who clean dry latrines, but also to those who clean septic tanks without protective gear. Both are forbidden under the 2013 statute prohi­biting manual scavenging.

“When one goes inside a pit full of filth and shit, one has to consume alcohol or some other form of drugs to keep the smell away and not let it impact one’s senses. Almost everyone who does this job is an alcoholic, not because they enjoy being intoxicated, but because it becomes a necessity,” Titu says.

(This appeared in the print edition as "Of Human Depredation")