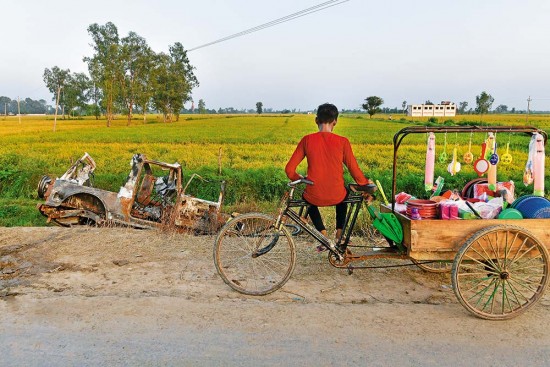 The forest closes in as the road becomes narrower. The vegetation along the Tikonia-Banbirpur road, leading up to the Nep­al border in Lakhimpur Kheri, Uttar Pradesh, becomes thicker as the shadows cast by the teak and saal trees fluctuate with streaks of sunlight. Closer to habitation in the Nighasan area, the forests give way to fields, mainly of sugarcane and paddy. They are cultivated predominantly by the Sikh farmers of the region that is part of the fertile Terai belt. It was into one such sugarcane field that Ashish Mishra, son of Union minister for state for home Ajay Kumar Mishra, escaped after his convoy comprising a jeep and two SUVs allegedly ran over farmers dispersing after their peaceful protest, crushing four of them to death on October 3. An on-duty local journalist was also mowed down. Three others, who were in the vehicles, were allegedly lynched by the protesters.

Ashish, popularly known as Monu bhaiya, was arrested on October 9 on charges of murder, rioting and conspiracy after he failed to est­ablish his alibi. He had claimed he was four kilometres away in Banbirpur—where the Mishras have their ancestral house—waiting for the annual ‘dangal’ (wrestling match) to begin. October 3 was an important day for him as deputy chief minister Keshav Prasad Maurya had agreed to be chief guest at the ‘dangal’ at Maharaja Ugrasen Inter College. Ashish’s father organises this event on Gandhi Jayanti every year, but it was postponed by a day this year to accommodate Maurya’s schedule. It was supposed to be a show of strength to showcase Ashish’s popularity in the area and pitch him as the BJP candidate from Nighasan seat in the forthcoming UP elections.