How safe is it to travel during the pandemic? Is it linked with the escalation in Covid-19 cases? 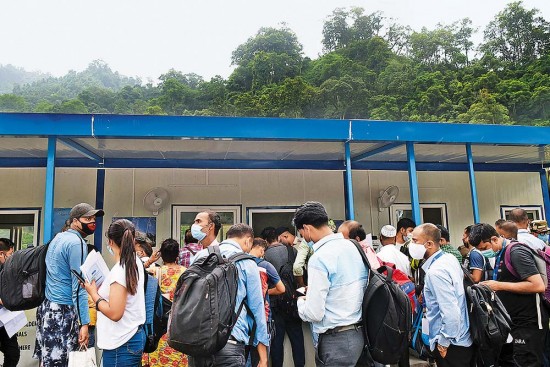 How long can you stay cooped up in your home? Coivid-19 put paid to travel plans of many in 2020. After over a year, many have understandably become fidgety and daring, and in the summer heat, escape to the hills has suddenly boomed in West Bengal. But how safe is it to travel during the pandemic? Is it linked with the escalation in Covid-19 cases? These are questions now being asked by health professionals and administrative officials, after a quarter of Covid-19 cases over the past two months were registered in the state’s districts hosting popular tourist destinations. Notably, most of these districts have low population density.

Daily Covid-19 bulletins reveal that 17,374 of the state’s 70,519 case ­record­ed between June 15 and August 15 were in the districts of Darjeeling, Kalimpong, Jalpaiguri and East Midnapore.

In fact, Darjeeling, with 1,004 active cases, has more active cases than Calcutta, with a population density 60 times higher than the hill getaway. As of August 16, the state capital, one of India’s most densely populated metros, has 879 active cases.

Along with Jalpaiguri—the gateway to the Himalayan foothills known as Dooars—the hill stations of Darjeeling and Kalimpong are popular tourist destinations. In the state’s south, East Midnapore is home to several beach destinations.

With a population density of only 239 people per square kilometre, Kalim­pong is so small it is covered by only one assembly constituency. It has recorded 1,236 cases in the same period, which is about one-fifth of the total cases in the district since March 2020.

Contrast this with the state’s average population density—1,028 per sq km according to the 2011 census. Among the hotspots, only East Midnapore is a densely populated district at 1,081 people per sq km.

A senior administrative officer in Jalpaiguri attributed the spike in his district to tourists who faced travel restrictions from Darjeeling authorities and came over to the Dooars instead of returning home. “After witnessing a spike, Darjeeling authorities ensured no one without an RtPCR negative report or certification of both vaccine doses was allowed in. As a result, many tourists came to the neighbouring Dooars,” the officer said.

An official in Darjeeling said tourist flow was restricted over the past month. “In the town, few hotels are operating, that too with limited capacity and staff strength. The low tourist numbers can be estimated from the fact that when the iconic ‘toy train’ resumed operations on August 16, only 37 of the 240 tickets were sold.”

In East Midnapore, the sea beaches of Shankarpur, Mandarmoni and Digha initially witnessed a flood of tourists once restrictions were relaxed in end-June. Later, authorities began implementing restrictions strictly, including checks for RtPCR negative reports or both vaccine jabs.

According to Arindam Biswas, an internal medicine expert at Calcutta’s Rabindranath Tagore International Institute of Cardiac Sciences, tourist spots are likely to witness spikes despite all precautions. “There will be spikes wherever people mix or gather in numbers. It’s not possible to maintain social distancing and other precautions at travel destinations. People also tend to be more relaxed there. If you ask me, travelling before the third wave is over is not a good idea,” Biswas said.

A senior health department official too said the state’s prime concerns now are Darjeeling, Kalimpong, Jalpaiguri and East Midnapore, none of which were in the spotlight during earlier waves of the pandemic. Since March 2020, the main areas of concern were Calcutta and its neighbouring districts of North 24-Parganas, Howrah and Hooghly—all of which have significant urban spreads.

(This appeared in the print edition as "The Traveller’s Bug")