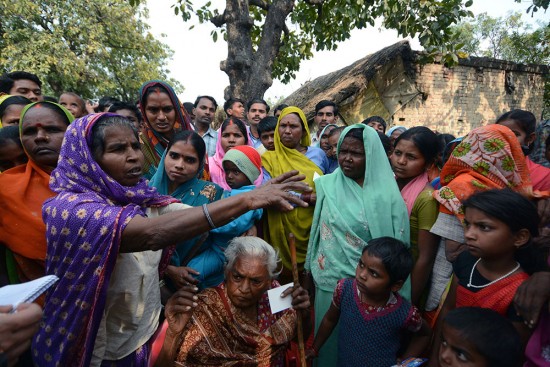 What’s your caste?
Dalit, Sir!
That’s OK, but what’s your caste?
One that you use as an abuse,
Who’s found in your sewage drain,
For whom you have a segregated dinner plate, Sir!
I thought you were a Hindu.
That too, Sir! But only during your elections.

The satirical poem by Baccha Laal ‘Unm­esh’ comes alive each time there’s an election in Uttar Pradesh, and the state’s top political leadership, including chief minister Yogi Adityanath, embarks upon a ‘political tourism’ pilgrimage of Dalit households. And far from being a new phenomenon in the political discourse of the Hindi ‘heartland’, it’s actually an age-old, ideology agnostic practice, where political parties suddenly discover a keenness to share the pain and agony of Dalits just before elections.

Of the five states going to the polls, UP is the most crucial because of its numerical strength—it holds the largest number of parliamentary and assembly seats. The significance of the state in regional and national politics can be understood from the popular slogan: “Delhi ka rasta UP se ho kar guzarta hai (The road to Delhi goes via UP)”. With every political outfit vying to capture the state, none can take the risk of alie­n­ating its approximately 20 per cent Dalit population—one of UP’s most politically vibrant soc­ial groups. The strong performance of BSP and its influence among subaltern groups in general and Dalits in particular is a good eno­ugh indicator of the community’s importance in state politics. With assembly polls once again approaching, all parties in the fray have again started wooing Dalits.

So, with regard to the current election cycle, the important questions that need answering are: What is the significance of the Dalit vote-bank in UP’s politics? How did BJP gain their support in the last parliamentary and assembly elections, and assimilate them into the Hindu­tva project? And how and why are Dalits now moving away from this?

With such a significant vote share in the state, Dalits have the power to overturn UP’s political fortunes. They were the major support base for BSP, but a significant chunk of them—the non-Chamar/Jatav castes like Dhobi, Kha­tik, Pasi, Valmiki, nearly 12 per cent of the state’s Dalit vote base—moved away from BSP into BJP’s kitty in the 2017 ass­e­mbly polls. It signified a success of BJP’s micro-­caste management—mobilising smaller caste groups within Dalits against the dominance of the larger caste groups, by promising them a share in State power. Another tactic BJP deplo­yed was expansion of public space through recognition of heroes of each caste. Political anthropologist Badri Narayan, in his recent book Republic of Hindutva: How the Sangh is Reshaping Indian Democracy, explains that BJP “...reinterpreted and recreated the cultural resources of Dalits at the local level, including their caste histories and memories, with the aim of adding a sense of Hindutva identity to their psyche, ultimately transforming them into sites for political mobilisation”. 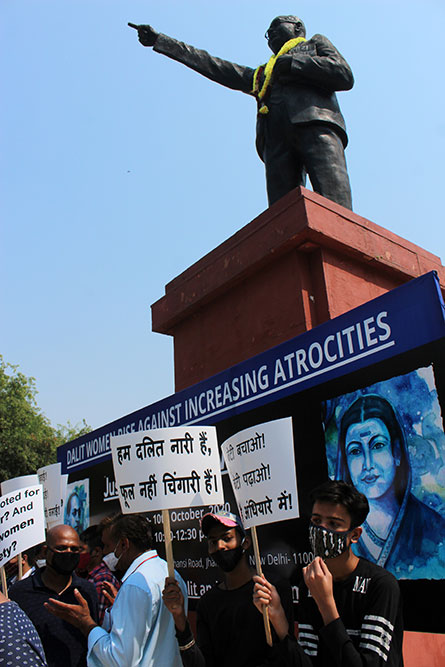 Such identity assertion of smaller Dalit castes through projection of their hitherto unrecogni­sed icons was substantiation of BJP’s overarching strategy of absorbing them under the Hin­d­u­tva umbrella, and developing them as pol­itical foot soldiers. However, in the five years since then, during which time this electoral strategy was tested on the ground, Dalits enco­u­n­tered a familiar betrayal, as the promised sha­re of power didn’t materialise. Rather, their suf­fering of poverty, caste violence, discrimination and denial of dignity increased within BJP’s Hindutva project. This may badly dent BJP’s strategy of mobilising non-Chamar/Jatav Dalits in the forthcoming polls.

There are three aspects to this sense of betra­yal—rise in crime against Dalits, denial in share of State power, and their ‘othering’—which expla­ins their growing disaffection with BJP and Hindutva.

The latest NCRB data (from 2020) rev­e­a­led that UP recorded the highest number of crimes against Dalits, with a 7.3 per cent uptick.

The latest statewise National Crime Records Bureau data (from 2020) rev­e­a­led UP recorded the highest number of crimes against Dalits, with a 7.3 per cent uptick. The recent spate of rapes of Dalit girls—in Lakhimpur Kheri, Hath­ras and Balrampur—are examples of brutality and atrocities against their women. Add to that the undignified treatment of the victim’s body and her family in the Hathras case, which crea­ted an outrage across all Dalit sub-cas­tes. What embarrassed BJP and its supporters most was the question: “Kya Hathras ki beti Hindu nahin thhi? (Wasn’t the Hathras victim a Hin­du?)”, which they were confronted with wherever they went. It may even have acted as the proverbial last straw that smashed the Dalit illusion that they were accepted as Hindu, exposing the hegemony of BJP’s Hindutva project. 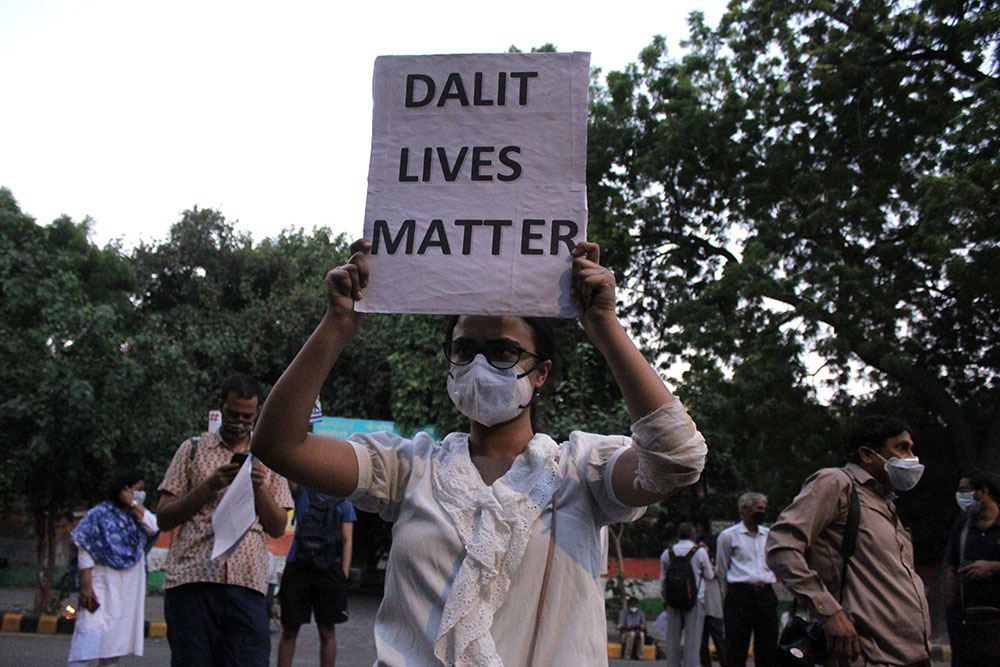 According to a recent report in Dainik Bhas­kar, out of 75 district magistrates (DMs) in UP, only four are Dalits. Sim­ilarly, out of 75 superintendents of police (SP) and senior superintendents of pol­ice (SSP), only five are Dalits. Bureaucracy and law and order are significant pillars of State power for the dissemination of developmental largesse, grievance redress and deli­very of justice—and the poor representation suggests limited scope for Dalits to register their grievances, seek justice and access development. The Dainik Bhaskar rep­ort also revealed that out of 30 vice-­chancellors (VCs) at state universities, only one was Dalit. In contrast, there were 22 from upper castes, showing Dalit under-repre­sentation and upper caste over-­repre­sentation.

These are but a few examples where Dalits feel aggrieved they are not getting their due share, which they were promised in 2017. Yet, despite this growing dissatisfaction, BJP continues to appeal to Dalits through a sleight of hand: ‘cultural recognition’. BJP’s Scheduled Castes Mor­cha launched a Samvidhan Gaurav Yatra on November 26, 2021, to mark Consti­tution Day, concluding the programme on Dec­ember 6, Dr. Ambedkar’s death anniversary, in which they not only highlighted welfare sche­mes and work done by the BJP government for Dalits, but also publicised their respect for the Dalit icon, all the while keeping alive their project of co-opting Ambedkar’s legacy within Hin­dutva for electoral gain.

This time, though, with feelings of being disowned and neglected running large among the state’s Dalits, these efforts don’t appear to be cutting any ice.

Just a couple of weeks ago, UP CM Yogi Adityanath and Gorakhpur MP Ravindra Shukla (Bhojpuri film icon Ravi Kishan) of BJP ate lunch at a Dalit household in a muchpublicised stunt. The tried and tested ritual was meant to signify upper caste acknowledg­ement of Dalit inclusion within Hinduism. However, with rising and deepening consci­ousness among the state’s Dalits, the media blitzkrieg appeared to have backfired, as it was widely ‘read’ to signify Dalit exclusion and othering. After all, the Hindutva project wouldn’t need to carry out a similar stunt with upper castes, would they?

Effec­t­ively, the growing crime and viol­ence against Dalits, lack of institutional justice for cases of caste brutality, particularly on Dalit women, and denial of power-sharing, may have undermined BJP’s multi-pronged str­ategy to woo the Dalit vote in their favour in the forthcoming elections. The challenges confronting BJP—retaining Dalit electoral support and convincing them that they rem­ain an integral part of the Hindutva project—have not only been complicated by the strong presence of an anti-caste movement and rise in socio-political and cultural assertion of UP’s Dalits, but may have been badly damaged by the admi­n­istrative apathy of the current BJP regime in Lucknow.