As the BJP gears up for re-election, the Hindu-Muslim card is likely to be played out stronger than before 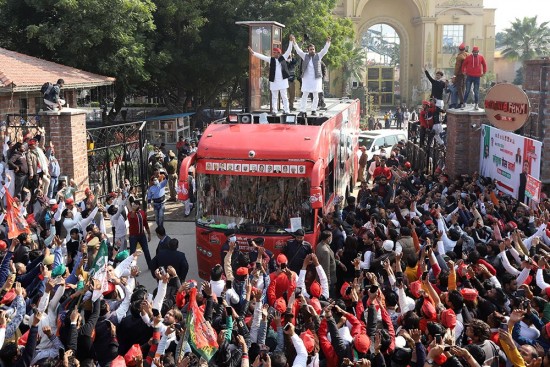 Seeking re-election in UP this year, the BJP seems to be more desperate than ever to pol­arise the electorate along the Hindu-Muslim binary, while its nearest con­ten­der, the SP-RLD combine, seems to be stuck with the same old strategy of stitching together a favo­urable caste coalition. At the same time, the far­m­ers’ agitation against the three controversial farm laws appears to be carrying considerable sal­ience. The BJP government had to recall the laws, but whether this gesture will help the BJP in UP is one of the biggest look-­outs in this election.

More than eight years after the gruesome massacre and displacement of 2013 in the Muzaffar­nagar-Shamli regions of western UP, the BJP may be depending too much on their Plan A. Whether the wedge between Jats and Muslims still persists, or has been diluted by now, is poised to be an imp­ortant factor in this election.

There are reports that out of 32 Jat khap panch­a­yats of western UP, not more than four had actually turned out at the meeting called by Union home minister Amit Shah. It is also said that out of those, the principal khap representatives were missing. Those who actually turned out happe­ned to be BJP cadres belonging to those khaps.

This factoid is being read in two ways by poll obs­ervers and analysts. One, that it really indicates a strong resentment among Jats against the BJP; and two, that Jats continue to remain saff­ronised and didn’t turn up at the meeting with Shah just to mislead the Muslim electorate. Beca­use otherwise, Muslims—who are significant in these parts—may turn against the Jat nominees of the RLD, as had happened in the Bihar assembly elections of 2020, when, on a number of seats, Yad­av voters, especially on seats with a history of having elected Yadavs, crossed over to the BJP if the RJD coalition didn’t have a Yadav candidate.

It is true that ever since the BJP has emerged as a hegemon, the regional and caste-based political outfits have been subsumed under or assimilated into the BJP’s neo-Hindu­tva. There are reasons for some people to see if there is rea­lly an urge among such smaller outfits and also among their core social bases to re-emerge as forces to reckon with, the way they did in the last decade of the 20th century and the first decade of the 21st.

Those who tend to see a renewed surge in such outfits are inclined to argue that the lure of neo­-Hindutva is gradually dissipating. They say this is more so because the Yogi regime has extended far too many favours to the Rajputs (aka Thak­urs) and other dominant castes, that too at the expense of upwardly mobile non-Yadav OBCs. Some leaders of such caste gro­ups have already quit the BJP to join the SP. This may not reflect electorally, though, as in West Bengal, where the BJP didn’t gain anything despite several TMC leaders joining it just before elections. Ove­r­all, recent trends in Bihar and West Bengal asse­mbly elections leave observers and analysts more confused.

What about the Muslim voters? For long, Ind­ian elections have talked much about them. With the rage of neo-Hindutva, though, they have been rendered electorally irrelevant. Yet, the politics of majoritarian consolidation against the bogey of Muslims refuses to vanish. UP’s Muslims have suffered unparalleled State-inflicted persecution for their agitations against the NPR-NRC-CAA, which involved a greater number of youth from lower middle classes than any other segment. Many of them continue to suffer from what they describe as false and fabricated cases. More than anything else, this experience seems to suggest that they should be more cautious in revealing their electoral inclinations.

The only groups that offer clarity about their electoral choices are Muslims and Savarna Hindus. the confusion is most reg­arding non-Yadav OBCs and non-Jatav Dalits.

Are they still confused between the SP and the BSP? Perhaps not. Are they looking upon AIMIM as an alternative? This too appears less likely. In the past, AIMIM’s social media presence gave a lot of indications about their electoral fate. This time around, even that space seems to suggest that AIM­IM is seen at best as a spoiler who eventually ends up helping the BJP. On this count too, the Bih­ar experience is a reminder to UP Muslims. In Bihar in 2020, the BJP prevailed over many seats with slender margins only because of a number of spo­ilers in the Opposition space. By now, they have come to realise that an unprecedented majo­ritar­ian consolidation cannot help them, even if it rai­ses the proportion of Muslims among legislators. For, a majoritarian regime can very well aff­ord to ign­ore the Muslim legislators, not only inside the legislative arena but also in terms of inf­luence on pol­­ice and other state machinery. Between 1937 and 1939, UP Muslims had undergone this very experience, something the Muslim League expl­oited in 1946-1947, and left behind as a stone aro­und the community’s neck after Independence.

Overt as well as covert persecution of the artis­anal and informal sectors of the economy have led to a tactical suppression of social stratification within Muslims—something that had slowly gai­ned salience and articulation till neo-Hindutva arrived as the hegemon. With this, even a catchy slogan of Dalit-Muslim unity, which is already under threadbare scrutiny by the Pasmanda activists, has taken the backseat.

One of the most important reasons for this is that the BSP is no longer seen to be as strong as it once was, what with non-Jatav votes deserting it. In this context, Mayawati’s oft-repeated game of fielding Muslim nominees against the SP’s Muslim nominees does not seem to be working this time. In short, the only groups that offer clarity about their electoral choices are Muslims and Savarna Hindus. On the flip side, the confusion is most reg­arding non-Yadav OBCs and non-Jatav Dalits. Will they continue to remain spellbound by neo-Hindutva? Among the two last mentioned groups, the growing middle classes vacillate betw­een the lure of Hindutva and their economic depredations and lack of employment. Measures such as GST, demonetisation and acute crisis of healthcare, particularly during the Covid second wave last summer, have added to their woes and miseries.

The incumbent regime and its apologists, however, think their ‘coalition of extremes’ will take care of these grievances. They think that cultural satisfaction of the Hindu middle classes (with tem­ple, re-naming of cities, etc) and welfare sops for the poorest, will trump the economic and une­mployment grievances. This is one of the most important aspects to be watched out for on the day the results are announced.  The more info­rmed, non-partisan segment of UP electorates are left baffled by these identitarian factors, leaving them asking when the electorates will demand economic performance, poverty and unemployment alleviation, agrarian and ind­ustr­ial development, rule of law and genuine constitutionalism. How many of the media houses and oth­er advocacy groups will generate awareness on these lines? How many of the better-­fun­ded and better-equipped survey agencies will measure this specific segment of UP electorates? Are they rea­l­ly so elusive or minuscule that no survey can loc­ate them?

Mohammad Sajjad is a professor at the Centre of Advanced Study in History, Aligarh Muslim University