Why Are Students Angry? Is Conflict Over Public-Funded Higher Education Only Reason?

Fee hike during times of privatisation coupled with debates over ideology, caste-exclusionary elitism and gender equality are among the main reasons why university students are up in arms 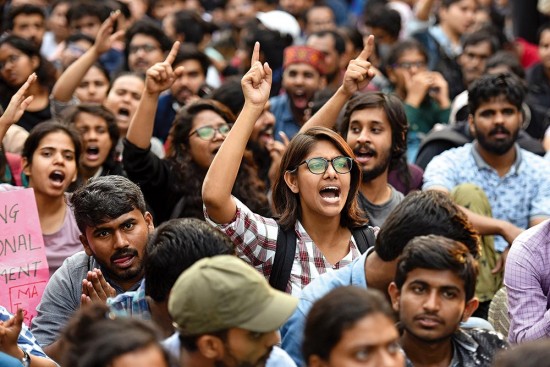 They are a bunch of vandals. They are the spring itself. They are freeloaders and parasites. They are the gene map of the future, of possible futures. They are an unruly, seditious mob. No, they really are the ones who bring life to democracy, the ones in whom freedom breathes its purest air.... Students! It’s often with a note of exasperation or scorn—one that hides a deep suspicion, even dread—that the world outside looks at university campuses. For all the belittling, nothing outside of war and religious/cultural animus seems to bring about such stark binaries of opinion as the image of protesting students. Why? Each day now brings profoundly troubling news. Something or the other is in deep crisis—the Constitution, political morality, entire sectors of the economy, the climate, and all of them at once. But if you looked at mainstream or ­social media, it would appear as if the biggest question in front of the nation is a bunch of students protesting. Why? Because it is war. Of another sort. The image of angry, dissenting students has come like a regular punctuation mark, an irritating comma, in recent years. That too in a field of seeming unanimity ­otherwise, whether in terms of electoral politics or mainstream headlines. It happened first on the FTII campus in Pune, then the Rohith Vemula sui­cide capped an extraordinary season of defiance in Hyderabad. It takes JNU, however, to get the citizenry really upset. The question everyone asks is: why are the students angry? Almost, how dare they protest? And, shouldn’t they be studying and getting a job instead?