It started with Gandhi marching to Dandi, mobilising the masses all along. Now every party takes the ­roadshow route to the election ring. 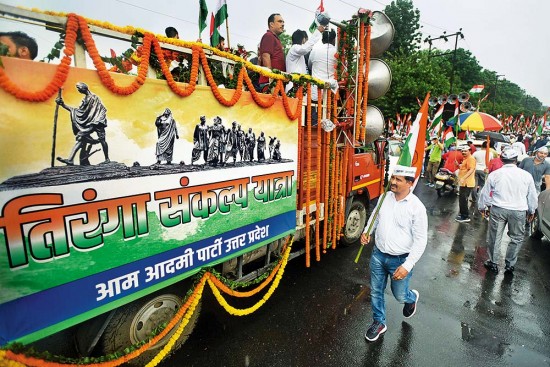 Thirty-one years after Lal Krishna Advani hit the road with the iconic Ram Rath Yatra to mobilise support for the campaign to build a Ram temple in Ayodhya, yatras or roadshows remain the most popular means for political parties to reach out to voters. Even in the age of social media, when ‘likes’ and ‘shares’ define a campaign’s success, parties of all hues continue to bank on yatras to amplify their messages. With the crucial UP assembly election due early next year, along with polls in Uttarakhand, Goa, Punjab and Manipur, all parties, including the BJP, the Congress, the Samajwadi Party, the BSP and AAP, have hit the road. Thousands of farmers are also out on the road against the new farm laws enacted by the Centre, and their protest could impact the elections ahead.

In an effort to spread its influence beyond the national capital, AAP has launched a Kisan Mazdoor Khet Bachao Yatra in Haryana to highlight farmers’ issues. The party, led by Delhi deputy CM Manish Sisodia and Rajya Sabha MP Sanjay Singh, is also in the middle of a Tiranga Sankalp Yatra that will culminate in Ayodhya on September 14, where the leaders are likely to pay obeisance at the Ram Lalla temple and then go on to Hanumangarhi. The party claims the yatra is for celebrating 75 years of independence, and to emphasise national unity and integrity, but critics allege that weaving nat­ionalism with Hindutva—a strategy mastered by the BJP­—is the real motive.

“It was the Rath Yatra that made me realise that, if I were to communicate the message of nationalism through the religi­ous idiom, I would be able to transmit it more effectively and to a wider audience,” Advani writes in his autobiography, My Country My Life (2008). While Ayodhya remains a powerful symbol, yatras now encompass a wider expanse of issues and territory. When the BJP sent 39 Union ministers to cover 22 states in a five-day Jan Ashirwad Yatra in August-end, the aim was to interact with people on the ground, reach out to various castes and social groups, and change public perception about the government’s handling of the Covid-19 pandemic.

BJP national general secretary Tarun Chugh says the Jan Ashirwad Yatra was the first of its kind as it was not election-centric. “The Narendra Modi government has been following the philosophy of antyodaya, according to which the benefits of politics should reach the last person. The yatra enabled newly-ind­ucted ministers to connect with people directly to understand their problems,” explains Chugh. 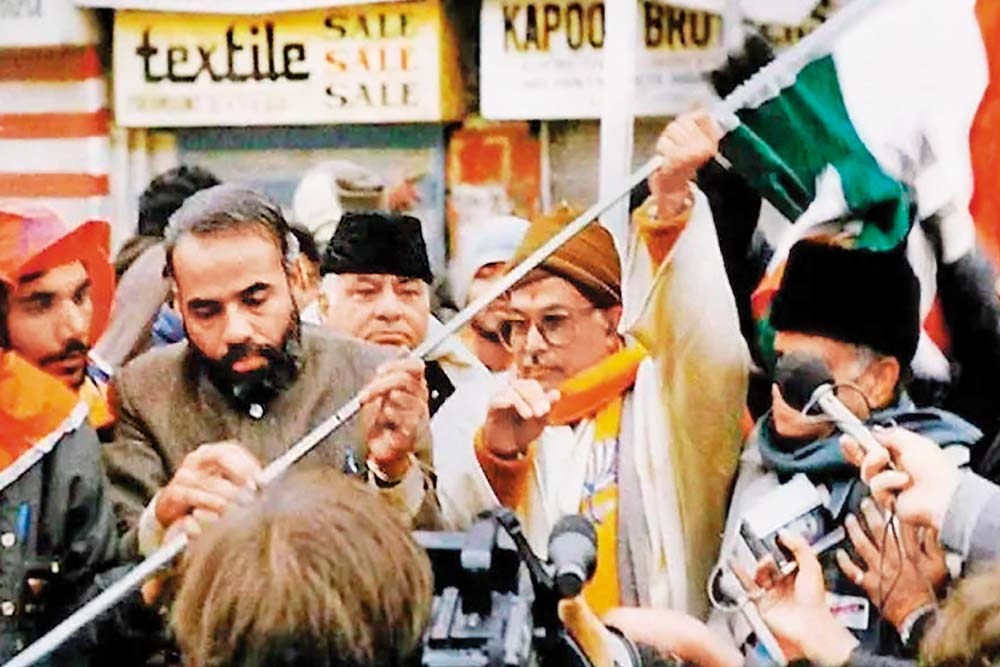 The Congress too has hit the streets, kicking off a Parivartan Yatra in Uttarakhand where it wants to return to power. There was also a plan for a Bhumiputra Yatra in Goa, but the BJP-led state government denied it permission citing Covid protocols. In Gujarat and Madhya Pradesh, where the Congress is the main opposition party, it has launched a Nyaya Yatra and an Adhikar Yatra, res­pectively. While the Nyaya Yatra aims to reach out to families of Covid victims, the Adhikar Yatra is meant to highlight the plight of Adivasi communities in MP.

A yatra also helps the party organising it by ­rejuvenating ­cadre on the ground.

“Yatras  give political parties a chance to connect with ­ordinary people in different places,” says social and political scientist Suhas Palshikar. “Given the expanse of the country, it remains a powerful tool for mobilising  the masses.” Whoever undertakes a yatra is engaging in a democratic activity that helps in forging a lively relation with the people. According to Palshikar, the masses still respond to the personalised contact that a yatra brings. “It is a counter to the false sense of belonging social media generates. A yatra provides a real sense of bel­onging and is still the best way of connecting with ordinary people,” he says. However, in the context of AAP’s Tiranga Sankalp Yatra, Palshikar cautions that every party needs to find a vocabulary of its own, depending on its avowed goals and the strength of its cadre. A yatra, he adds, also helps the party by rejuvenating its cadre on the ground. A BJP leader says this was an ­important reason for organising the Jan Ashirwad Yatra. “After Covid and the loss in West Bengal, party workers were demotivated and the yatra served to ­galvanise them. The yatras required meticulous planning on the ground. This gave the cadre an opportunity to get involved in party work and be a part of outreach programmes that had come to a standstill due to the coronavirus,” he explains.

Veteran BJP leader Murli Manohar Joshi, who undertook an Ekta Yatra from Kanyakumari to Kashmir in 1991-92 and ­unfurled the tricolour at Lal Chowk in Srinagar on Republic Day when militancy was at its peak, provides a more historical, spiritual and philosophical perspective. “Our scriptures talk about ‘charaiveti, charaiveti’…life’s journey is like a yatra,” says Joshi. ‘Charaiveti, charaiveti’, or ‘keep moving, keep moving’, are words from a hymn in the Aitareya Upanishad, exhorting the traveller to keep going regardless of setbacks and obstacles. Citing the examples of journeys undertaken by Lord Rama, Adi Shankaracharya, Gautam Buddha and the Pandavas, Joshi says the concept of yatra is age-old in our civilisation, as the earliest means to communicate and establish linkages. 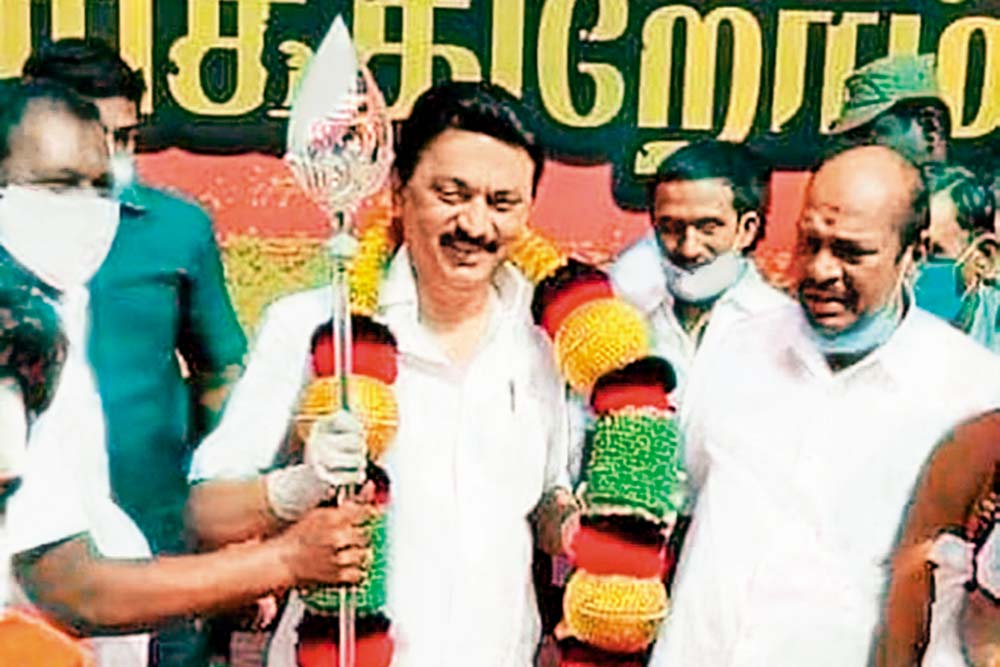 DMK’s M.K. Stalin with a Vel after BJP’s Vel Yatra in Tamil Nadu

Long before the yatra became a means of strengthening vote banks, it was used in the freedom struggle against British Raj by Mahatma Gandhi and other nationalist leaders spearheading mass movements. Gandhi’s historic 240-km march to Dandi in March 1930, launching the civil disobedience ­movement, is arguably the first yatra in modern history that was aimed at mass mobilisation.

In 21st-century India, several political leaders have sensed that the fastest way to connect with voters is by reaching out to them—up, close and personal. Trinamool Congress leader and West Bengal CM Mamata Banerjee earned the sobriquet of ‘street-fighter’ as she never hesitated in going straight to the masses. In fact, her padyatra across Bengal in 2011 was one of the factors that made it possible for her party to defeat the long-entrenched Left Front ­government in the state.

Down south, Y.S. Rajasekhara Reddy gave padyatra politics a new meaning. In 2003, when he was heading the Congress in united Andhra Pradesh, YSR embarked on a 60-day, 1,500-km padyatra to highlight the problems of people facing drought and the TDP government’s alleged apathy towards farmers. He managed to strike a chord with the people and swept to power in the 2004 assembly elections. The late YSR’s son Jagan Mohan Reddy continued the padyatra legacy and undertook a Praja Sankalpa Yatra in 2018 to reach out to people in post-bifurcation Andhra Pradesh. His party, the YSR Congress, went on to win 151 of the 175 assembly seats and 22 of the 25 Lok Sabha seats from the state. YSR, in fact, had only taken a leaf from N.T. Rama Rao’s book. NTR had undertaken the Chaitanya Ratham Yatra in 1982 after the TDP was formed. The actor-turned-­politician travelled nearly 40,000 km, touring the state four times in nine months. The yatra catapulted him to power in 1983.

The BJP too has tried to join the yatra bandwagon in South India. In November 2020, ahead of assembly polls in Tamil Nadu, its Vel Yatra (vel or spear is a symbol of god Murugan) covered six major Murugan shrines. “Though the Vel Yatra did not get us political dividends in these elections, we have made a point and established our ­presence,” says a BJP leader. According to him, not all yatras get instant results. “They build momentum,” says another party leader. “Gandhiji’s Dandi march did not give immediate tangible results. The real fruit of Advaniji’s rath yatra is getting ready now in the form of the Ram temple in Ayodhya. There is no substitute for hard work, going to the roots and connecting with people at a personal level. Social media has its limitations.”

Deepak Chopra, who has been Advani’s close aide for decades, was minutely involved with the planning of the Ram Rath Yatra, and all the other six yatras undertaken by the veteran leader subsequently that gave him the ­sobriquet of the ‘eternal yatri’. “Right from the days of the Jana Sangh, Advaniji had one advice for party workers: “karyakarta ka ek paer rail mein hona chahiye and doosra jail mein” (party workers should have one foot in the train and the other in jail),” says Chopra. “Trains were imp­ortant for travelling and establishing contact with people. Once you know the problems of the people, you have to ­organise protests and demonstrations to help them. And that will probably take you to jail. He has followed this in his own political journey.” 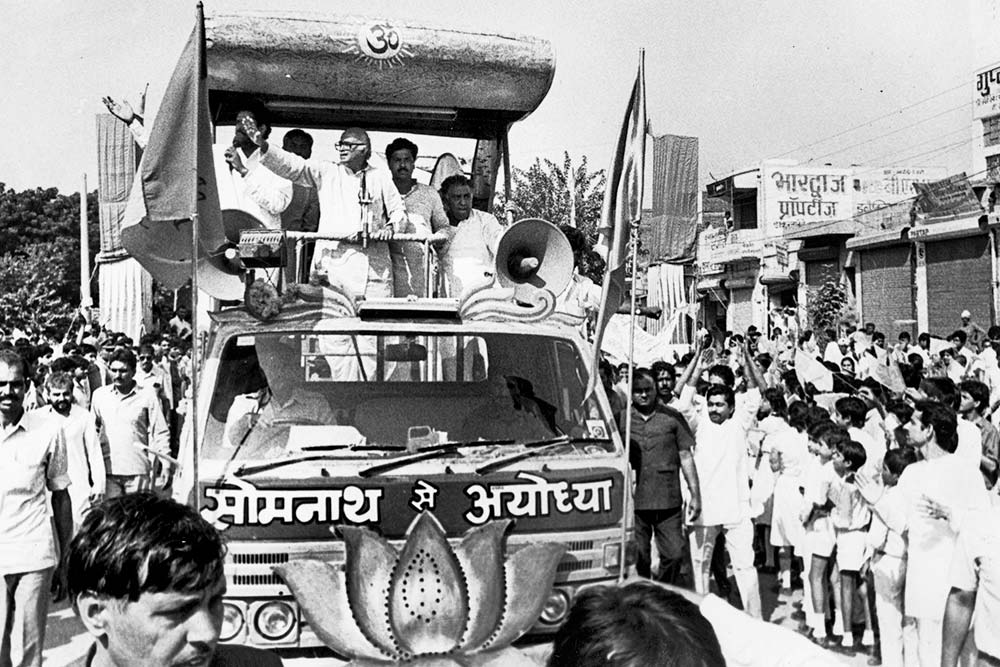 This Rath Was A Hit

In September 1990, veteran BJP leader Lal Krishna Advani launched his Ram Rath Yatra for the Ayodhya movement. Starting from Somnath on September 25, the birth anniversary of Deendayal Upadhyaya, the Ram Rath—a Toyota pick-up truck made to look like a chariot—was supposed to reach its destination, Ayodhya, on October 30 after a journey of 10,000 km, and the then BJP president was to join the kar seva there. But the Ram Rath could not reach Ayodhya. The yatra had to end in Samastipur, Bihar, on October 23 as then Bihar chief minister Lalu Prasad Yadav denied permission for it to continue. Advani was arrested and detained there for five weeks.

Though Advani did not reach Ayodhya then, the yatra changed the BJP’s fortunes. From 85 seats in the 1989 Lok Sabha elections, the party went on to bag 120 seats in 1991. The yatra managed to whip up a strong Hindu fervour and served as confirmation of the idea that religion could decide electoral fortunes. “I had never realised that religiosity was so deep-rooted in the lives of Indian people,” Adv­ani observes in his autobiography My Country My Life. “It was during the Ram Rath Yatra that I first understood the truth of Swami Vivekananda’s sta­tement that ‘religion is the soul of India and if you want to teach any subject to Indians, they unders­tand it better if it is taught in the language of relig­ion’.” The overwhelming response to Advani’s rath yatra has since seen parties across the country fall back on this strategy to reach out to the masses.