From Ghulam Nabi Azad to Mehbooba Mufti, Valley leaders have invoked the Dogra rulers to win over Hindu-majority Jammu. 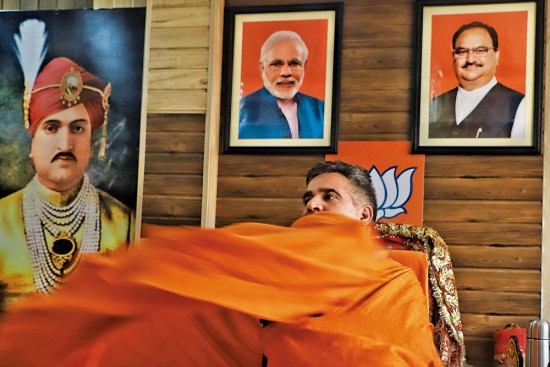 On April 1, 2012, a life-size statue of Maharaja Hari Singh was unveiled on the Jammu-Tawi riverfront by his son and Congress MP Karan Singh and then Union minister Ghulam Nabi Azad. The project was a brainchild of Azad during his term as CM and he regularly monitored its progress till completion. A few years later, another statue of the former Dogra king—a 10-foot-high bronze alloy sculpture by well-known artist Ravinder Jamwal—was unveiled at the Maharaja Hari Singh Memorial Park by then CM Mehbooba Mufti.

The irony is unmissable. Kashmiris, especially Muslims, have had a thorny relationship with the region’s Dogra rulers and look back at the period between 1846 and 1947 as possibly the worst phase in their long history of “persecution and subjugation”. The Dogra kings had introduced the reviled forced labour system under which Kashmiri Muslims were forced to work without payment. And the last king Hari Singh is alleged to have ordered the massacre of Muslims in the once-Muslim majority Jammu region. “2,37,000 Muslims were systematically exterminated—unl­ess they escaped to Pakistan along the border—by the forces of the Dogra State headed by the Maharaja in person and aided by the Sikhs. This happened in October 1947, five days before the Pathan invasion and nine days before the Maharaja acceded to India,” Saeed Naqvi writes in his book Being The Other, The Muslim in India, quoting an August 10, 1948 report published in The Times, London.

Despite the controversies associated with Dogra rulers, especially Hari Singh, successive chief ministers—from Ghulam Nabi Azad to Mufti Mohammad Sayeed and Mehbooba Mufti—have invoked the Hindu Dogra rulers to consolidate their position in Jammu and Kashmir. And unveiling a statue or two has helped them reap political dividends despite the apparent contradictions. For obvious reasons, the politics around statues have rev­olved around Dogra kings and lately, right-wing leaders as the BJP tries to build a masculine narrative around Hindu leaders who worked for integrating Kashmir with India. 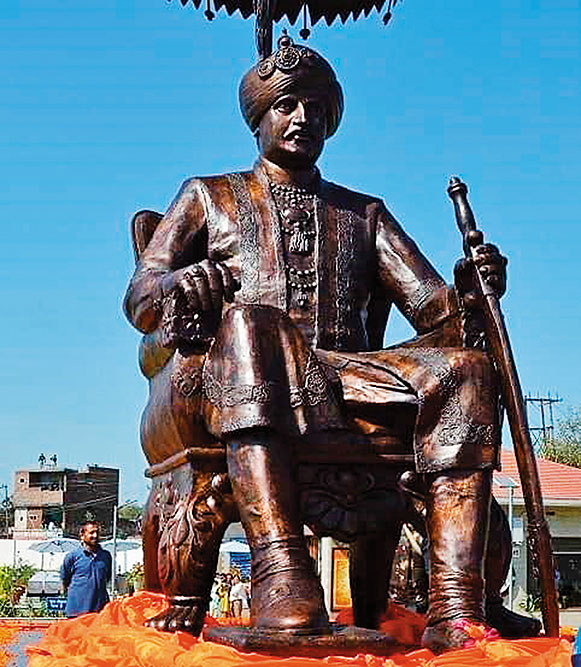 In September 2021, the BJP also installed a statue of Hari Singh at the party headquarters at Trikuta Nagar in Jammu. Before that, on June 6, 2019, a 17.5-metre-high statue of BJP ideologue Syama Prasad Mookerjee, his first in Jammu and Kashmir, was unveiled in Kathua district. Union minister Jitendra Singh unveiled the statue at a ceremony attended by senior BJP leaders, inc­luding national vice president Avinash Rai Khanna.  “Although Mookerjee was not born in Jammu and Kashmir, his sacrifice in the state gave a message that the nation and its interests were paramount for an Indian and that there should be no barrier in relations between the Union of India and this border state,” Singh told a gathering after unveiling the statue.

In November last year, the foundation stone for a statue and memorial of the first Dogra ruler of undivided Jammu and Kashmir, Maharaja Gulab Singh, was laid at Lakhanpur. To be constructed at an estimated cost of Rs 2 crore , the memorial will include the Tricolour mounted atop a 150-foot-high pole. Over the past one decade, more than 50 statues have come up in Jammu and adjoining areas. And about 90 per cent of the statues are of Dogra rulers and the rest are of Indian Army officers.

Ravinder Jamwal, who has carved over 40 of these statues, says that executing agencies invariably ask for standing statues showing valour and a muscular image. “In the case of the Hari Singh statue, I suggested to the then deputy chief minister Nirmal Singh that we can show the king seated in his darbar. The deputy CM agreed and you can see that statue at the Maharaja Hari Singh Memorial Park,” Jamwal says. “You can call Jammu a city of statues,” he adds.

Political analysts say Congress leaders like Ghulam Nabi Azad played a big role in bringing back the Dogra raj legacy to Jammu and former chief minister Mufti Mohammad Sayeed took it forward. While the Abdullahs—Farooq and his son Omar—didn’t publicly approve of it, they gave their consent by sending representatives to the unveiling ceremonies of statues of Dogra rulers.

Political analyst Zafar Choudhary says that when Azad was deputed to the region by the Congress as the Jammu and Kashmir Pradesh Congress Committee chief, he started working around the Dogra identity to create his own pol­itical space and legacy. “It was deliberate on his part. He thought that he would not get many votes from Kashmir, and hence started concentrating on the Jammu region,” Choudhary tells Outlook. “He wore a saffron turban all throughout. And in 2002, his entire campaign was around Hari Singh and the glory of Dogra rule,” Choudhary adds.

Choudhary recalls the time when Omar Abdullah described Hari Singh as an “autocratic Dogra ruler” and Azad responded with a snarky comment, “How come Omar Abdullah spoke against our ruler and our pride,” Choudhary says. Later on, Mufti Mohammad Sayeed, when he became the chief minister, named one of the vital bridges in Jammu city after Hari Singh. “Like Azad, Mufti also wanted acceptability among Dogras of Jammu to strengthen his position,” Choudhary says.  Since the abrogation of Article 370 on August 5, 2019, BJP leaders have been trying to appropriate Hari Singh’s legacy, callinng him the saviour of Jammu and Kashmir. However, it is facing challenges from Azad and others, who are accusing the BJP of dismantling a state created by Maharaja Gulab Singh in 1846. In the new scheme of things, the Dogra rulers are emerging as benign, humanist and people-friendly kings who established an empire and spread its borders beyond Kashmir up to Tibet.

As the Dogras embrace their kings and emperors to create a more muscular image of the community, those who have been forgotten are the icons in the field of culture and literature—singer Malika Pukhraj, who was born in Hamirpur Sidhar; Ustaad Alla Rakha, born in Samba district, and K.L. Saigal, born in Nawa Shahar in Jammu. In the growing statue landscape of Jammu, they are conspicuously missing. So much so that a statue of Mahatma Gandhi in Jammu’s Satwari Chowk has also disappeared without any trace since the 1990s.

(This appeared in the print edition as "King’s Landing")