In Assam, where every road is leading to saffron, the GOP decides to plough a lonely furrow to cut its losses ahead of bypolls. 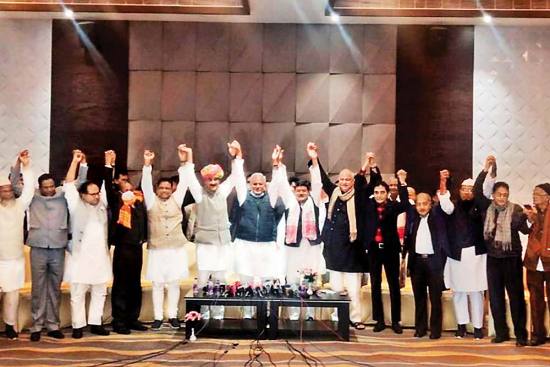 Four months after the Assam assembly elections, the Congress-led Opposition alliance in the state is disintegrating even as the party’s MLAs eye greener pastures in the ruling BJP-led front. The Congress has already washed its hands of a key constituent, the All India United Democratic Front (AIUDF), while another, the Bodoland People’s Front (BPF), is cosying up to the BJP-led front as the state prepares for bypolls to five of the 126 assembly constituencies.

The Congress decided to break ranks with the AIUDF as realisation eviden­tly dawned on the grand old party that remaining with the latter had neither helped much in the last assembly ­elections nor would it help its cause in the future; some AIDUF leaders’ praise for chief minister Himanta Biswa Sarma came as the last straw.

A core committee meeting, chaired by newly-ordained state Congress president Bhupen Bora last month, took offence at the AIUDF’s “behaviour and attitude in relation with the BJP”. It said the continuous praise of the BJP and the chief minister by some AIUDF leaders was showing the Congress in poor light.

The AIUDF, however, feels the ­alliance need not have been ended due to the personal views of a few leaders. “The need of the hour instead is for secular and democratic parties to remain united and intensify efforts to keep the communal BJP in check,” says AIUDF legislature party leader Hafiz Bashir Ahmed.

The BPF, meanwhile, has been increasingly getting closer to the BJP once again, with its leaders meeting the chief minister frequently and expressing their unwillingness to remain in the Opposition alliance. Taking note of this, the Congress core committee has left the decision reagarding the BPF to the party president.

The 10-party grand alliance, formed ahead of the elections, also included CPI(M), CPI, CPI(ML), Anchalik Gana Morcha and the RJD. The alliance had won 50 seats in the assembly polls with Congress securing 29 seats, AIUDF 16, BPF four and CPI(M) one.

“We did not act impulsively,” says Apurba Kumar Bhattacharjee, ­spokesperson of the Congress. “We had enough feedback to suggest there was no more need of the AIUDF, and that the Congress would be better off without it. We need to rebuild on our own, particularly with the bypolls coming up.”

Bypolls are due for the Mariani, Thowra, Bhabanipur, Tamulpur and Gossaigaon seats. While the Mariani and Thowra seats have been vacated by Congress MLAs Rup Jyoti Kurmi and Sushanta Borgohain, who have joined the BJP, the Bhabanipur seat has fallen vacant after AIUDF MLA Phanidhar Talukdar resigned and joined the saffron party. Tamulpur MLA Leho Ram Bodo (United ­People’s Party Liberal, a BJP ally) and Gossaigaon MLA Majendra Narzary (BPF) have died. The Majuli seat will also fall vacant after former chief minister Sarbananda Sonowal, who is now a Union minister, resigns from the assembly.

“If you include Majuli too, then three of the seats (Mariani and Thowra being the other two) are in upper Assam, where the Congress paid dearly for its alliance with the AIUDF, with the BJP driving the polaristation wedge deep. This has to change,” says a Congress leader from the region. The Congress, for its part, is now in talks with the Raijor Dal led by Akhil Gogoi.