The promised jobs are yet to materialise and India’s unemployment problem continues to grow bigger. 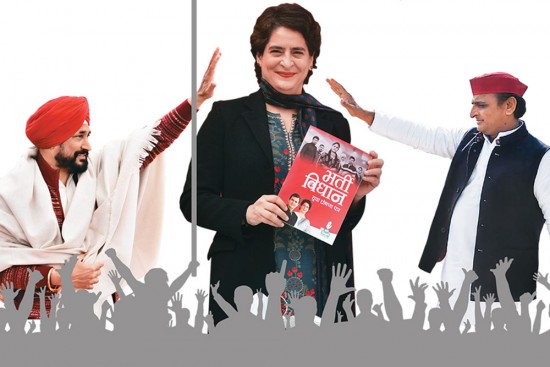 Raining jobs in UP

22 lakh jobs for UP youth, Akhilesh Yadav has promised. The BJP says it will provide jobs or self-employment opportunities to at least one member of each family. Mayawati’s poll plank is employment for youth, without any numbers. The Congress has 20 lakh government jobs—filling up a backlog of 12 lakh vacancies and eight lakh new jobs.

Congress chief minister Charanjit Singh Channi is promising one lakh jobs every year. SAD chief Sukhbir Badal has jumped into the employment bandwagon with the promise of a 75 per cent quota for locals in private sector jobs. The BJP-Amarinder-SAD alliance has guaranteed 150 hours of work for youth every month and Rs 4,000 per month each as unemployment allowance for graduates. For women, it promised 33 per cent reservation in police.

In Uttarakhand, Congress has promised jobs to 4 lakh youth under its ‘Char Dham, Char Kaam’ poll promise. BJP has offered 50,000 government jobs while the AAP has vowed to give unemployment allowance of Rs 5,000 each and jobs to every family. It has also announced one lakh government jobs for youth within six months and promised reservation of 80 per cent of the jobs in both government and private sectors for local youth.

The number of jobs RJD leader Tejashwi Yadav vowed to create if voted to power in the 2020 assembly polls. The BJP countered by offering 1.9 million. For the record, the current unemployment rate in Bihar is 13.5 per cent.

In Manipur, the Congress has promised creation of 50,000 jobs each year and one-third reservation for women in all government jobs.

(This appeared in the print edition as "Work in Progress")