‘Swachh Bharat’ is an extension of ‘Nirmal Gujarat’, but its cities are no stranger to filth 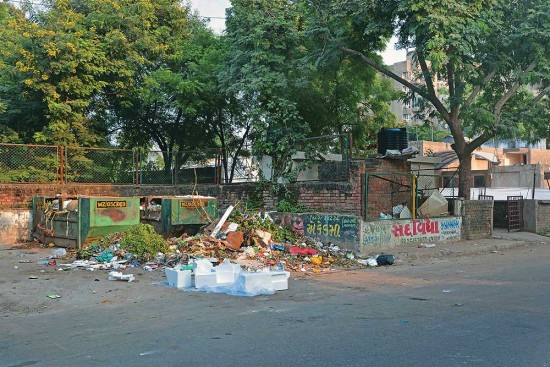 Gandhinagar, the state capital of Gujarat, has been the pride of successive chief ministers. More so of Narendra Modi who used his decade-long stint at the helm to build it up as a glo­bal-window-shoppers’-delight of ‘Brand Modi’, aka the Gujarat model of development.

So first let’s visit Sector 9’s government bungalows, a segregated, spanking new set of abodes where the district top brass live. Just a row behind are overflowing garbage bins, loitering cows and plastic refuse being burnt regularly. Weeks after the Chinese president’s visit to Ahmedabad and the grand lighting in Gandhinagar, the main thoroughfare of Sector 9 still remains in darkness as if compensating for the power splurge. Across the road is the office of the Gujarat Poll­ut­ion and Control Board (GPCB), the state’s watchdog  body. The frontage is spic and span, the back alley an overflowing gutter, which has been spilling sewage for the last one year. Interestingly, top civil servants, both serving and retired, as well as their better halves residing in the neighbouring Sector VIII regularly and nonchalantly negotiate this stinkpot stretch on their daily morning walks. Most of these drains are choked with plastic, notwithstanding the fact that Gand­hi­nagar is a declared ‘plastic-free zone’. Cheek by jowl stands the state secretariat, an imposing edifice from where Modi had launched his ‘Nirmal Gujarat’ campaign which has now meta­m­orphosed into the ‘Swachh Bharat’ crusade.