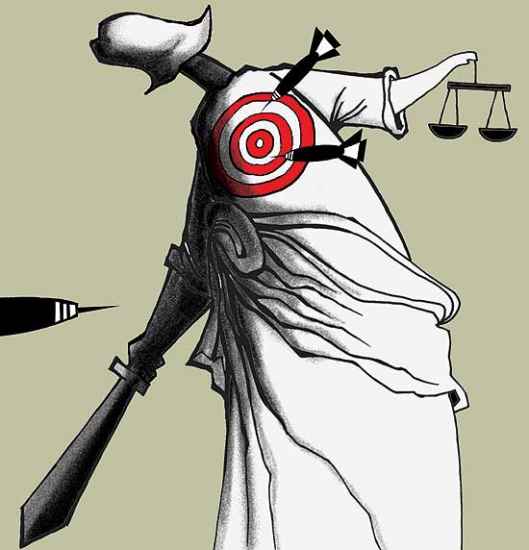 Judge-bashing is a favourite pastime of many misguided citizens. The attack often goes well beyond legal issues and aims below the belt. In a recent instance from the Gujarat High Court, one advocate asked for the transfer of a case only because the judge before whom the matter was listed belonged to a particular caste and the subject matter of the writ was the alleged casteism of a lower court judge. The petitioner’s counsel was brazen enough to say that the high court judge’s name suggested he belonged to a particular caste his client was fighting, and therefore, the judge had no business to hear the matter. Can there be anything more crude and offensive? We have many such worthies fond of taunting the judiciary at every opportunity. Not that all the honourable men and women adorning the bench are faultless. They have their own biases, follies, foibles. But then, is the society we are part of perfect? Don’t we all have our own peccadilloes and prejudices? Scandalising a judge is fraught with undesirable consequences, especially at a time when we are struggling to get the best of our lawyers on the bench. We should remember that the judiciary is the last bastion of our troubled democracy, and it is tottering, if one is to go by what has been happening in our legislatures, where some law-makers have shown themselves as not more than easily purchasable commodities.

I am equally distressed by the growing trend of assailing any compassion shown by the judiciary to an accused, which in some cases is certainly warranted. The whole response by the media and others in society smacks of vengeance and vindictiveness, something incompatible with the image of our nation as one that gave the world Gandhiji, besides religions that stress on compassion and forgiveness. In the recent decision in the much-dissected Priyadarshani Mattoo rape and murder case, two Supreme Court judges reduced the death sentence imposed on Santosh Kumar Singh to  life imprisonment. This created a furore that was staggering. One could understand the hurt feelings of the victim’s family. We cannot take exception to the father’s demand that the accused should receive the extreme penalty. But what about the others who joined the chorus? They were well-educated persons who should have the knowledge that capital punishment hardly deters anyone from resorting to a homicidal attack on another. The court was clear that this was not a “rarest of rare” case warranting a death sentence. They went on to highlight the youth of the accused, which raised the prospect of his reform. Added to this was the fact that he had got married after his acquittal by the trial court and had become a father. To the Supreme Court, these were factors to be taken into account. I am appalled that such nobility on the part of the highest court in the land has been misconstrued as judicial laxity. Are we not being barbaric when we bay for the blood of a youth who had no doubt grievously misbehaved with an innocent girl who rejected his overtures, but must be regretting his horrendous deed every living day?