Will He Stay, Will He Go: The Long, Uncertain Wait For Yediyurappa

The BSY affair is a bit like the ‘tiger is coming’ proverb in reverse. He has been ‘going’ for a while but is still there. But is he really going to go this time? 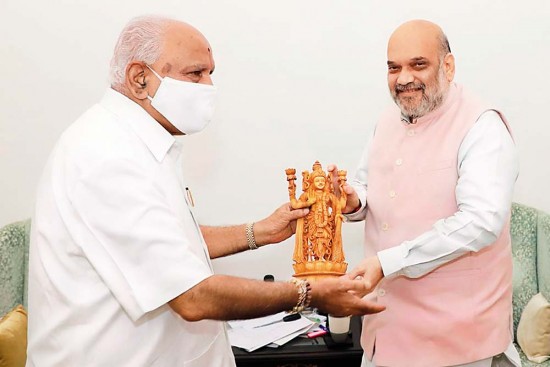 The on-and-off buzz in Karnataka is heard again. Is B.S. Yediyurappa going? Speculation swirled recently about some ‘axction’ on that front ever since the chief minister’s Delhi visit (in pic with Amit Shah). Not that there’s been any official acknowledgement. Yediyurappa brushed aside talk about his resignation, saying he had a fruitful meeting with the BJP top brass, and that he would be back in the capital next month, that his focus is on ensuring the party returns to power in Karnataka in the elections due in less than two years. Still, there’s enough to keep political circles excited. Early this week, an apocryphal audio clip about a revamp in Karnataka did the rounds. The state BJP president, Nalin Kumar Kateel, purportedly the person speaking in the clip, called it fake and asked for a probe.

But by then, local TV channels were discussing the probable contenders for the top post—at least seven of them. Yet, political analysts have long pointed out that choosing a successor in Karnataka would likely be a tricky affair given the caste and community pressures. An articulation of that came from an unlikely quarter—Congress leader M.B. Patil tweeted that the BJP may face the wrath of Lingayats if they “ill-treat” Yediyurappa. Of course, the Congressman was speaking from experience. Rajiv Gandhi replaced chief minister Veerendra Patil unceremoniously in 1989 and the Lingayats have never backed the Congress en masse ever since. With CM Yediyurappa calling for a legislature party meeting on July 26, there’s a great deal of speculation as to what might unravel. Incidentally, the day marks the second anniversary of Yediyurappa’s tenure. What lies ahead? Well, wait and watch for now.