To Win 2019 Elections, Sangh Parivar May Use Its Last Lethal Weapon—Construction Of Ram Temple 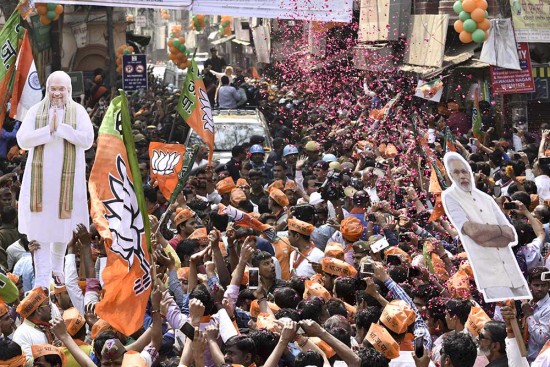 Since the BJP’s formidable victory in the 2014 general elections, Hindutva’s stock has been steadily moving up. After securing pol­itical dominance, the Sangh parivar now aims at a repeat win in 2019, aspiring to heg­emonise politics and Hindutva-ise India. Just like a booming stock market with a falling rupee does not reflect robust economic health, an upbeat Hindutva does not necessarily indicate its electoral invincibility. Moreover, Indian elections often defy arrogance and predictability, like the ones in 1977 and 2004. Interestingly, the parivar anticipated the challenge well in adv­ance while conceiving its strategy for 2019.

In 2014, a tentative parivar, crafting an enticing electoral strategy, came to power promising development, employment, transparency and inclusive governance under a charismatic leader. Hindutva played a role, but the Muzaffarnagar-like experiments with communal violence were exceptions, while caste equations were manoeuvred in a few states as well. However, it was brand Modi that won by raising the level of aspirations in millions, who were in the midst of despair during the UPA regime’s last years. Popular support for Modi, especially from the youth, was unprecedented, cutting across caste and class. And expectations were equally high.