Dalit artist Malvika Raj paints a portrait with words...on how she uses colours and forms to showcase her world view. 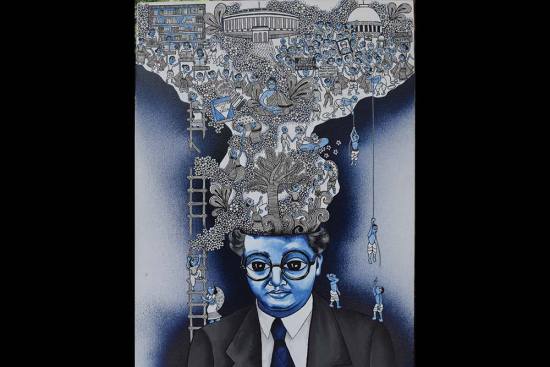 Art speaks the language of beauty, but what it says relates to truth. And there can be neither beauty nor truth without justice. Often, people misconceive beauty as being about order and symmetry, resistant to change. In my life—growing up in Bihar, aware of caste realities from early childhood—I’ve often encountered that instinct. Once, during one of my exhibitions at Patna Art College, a saffron-clad man came up to me and rebuked me for placing Lord Buddha in the centre of Madhubani art. How could I subvert tradition by not painting the Buddha as the ninth avatar of Vishnu, he asked. It was nothing new; I’ve been subjected to many such caustic remarks. What’s my answer? For me, the Buddha is human, deeply human, and that’s the very subject of art. His teachings are steeped in rationality and justice—that’s why Babasaheb Ambedkar was attracted to Buddhism. Those ideas resonate with us deeply. That’s why I was never inclined to merely adopt, in my Madhubani art, the traditional narrative of Hindu mythology. Instead, I learned the art precisely to tell the stories of the downtrodden and the people who fought for them. I’m the only Madhubani artist who broke away from that traditional path—I want more artists to join me—but my inspirations are as old as this land. If I see it as part of the artist’s responsibility to integrate beauty and justice, the source of that resides in our soil itself.

Mud Of The Village

Literally, soil. The traditional artwork of Bihar was made out of mud, on walls, in mural form. Madhubani art is seen as the preserve of the elite castes—their themes are perceived to be the tradition. That’s not the case. The history of this art form is difficult to trace, its original themes were about real life, nature and working women. Hindu mythology took over much later. Even so, many subsets of Madhubani art persisted through history, even if less feted. I have personally mostly employed Kobhar; its themes are close to nature. I feel ‘traditional’ Madhubani art lacks emotion and feeling—it tends towards pure formal beauty. For me, aesthetics comes into play when it touches something real…I also paint emotions onto my canvas.