“Enna koduma saar idhu?” (What torture is this, sir?) 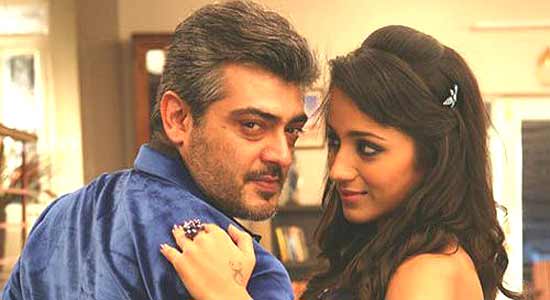 The thing about testosterone is it can either excite or frustrate. There is no in-between. Tamil superstar Ajith’s much-anticipated 50th film is a very “male film”, no doubt. There’s a heist, a few chases, gunfights, cusswords, three good-looking women and a salt-and-pepper-haired protagonist, who is naughty at forty. Only, none of it excites. Set against the backdrop of bookies and betting in Mumbai, Mankatha (The Gamble) is all about filthy lucre, Rs 500 crore no less. Which is why you wonder how a group of four young men can get away with a heist that looks more like a college prank. The target is the gambling kingpin and the owner of a cinema theatre in Mumbai that could well do with a fresh coat of paint. By way of a few inconsistent sequences and a few tiresome songs, the foursome are joined by Vinayak Mahadev (Ajith). He is a cop who is on a six-month suspension, though the way he comes across—cool, composed, unruffled, and all very studied—one would imagine that he has masterminded several such heists in his career. On the other side is the aggressive and animated ACP Prithviraj (Arjun), of Mumbai’s Special Task Force, on a drive to smash the bookies out over the boundary. A series of hits and misses follow and there is a twist in the tale. But by then, if you are a Tamilian, you are only saying, “Enna koduma saar idhu?” (What torture is this, sir?).