The drama between the Shiv Sena and BJP continues, with barely a couple of days to go for the term of the Maharashtra assembly to expire. 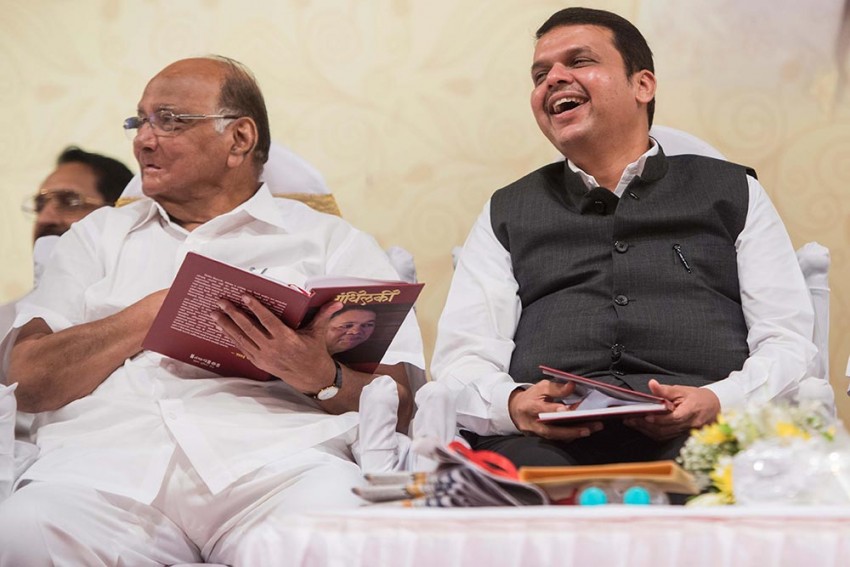 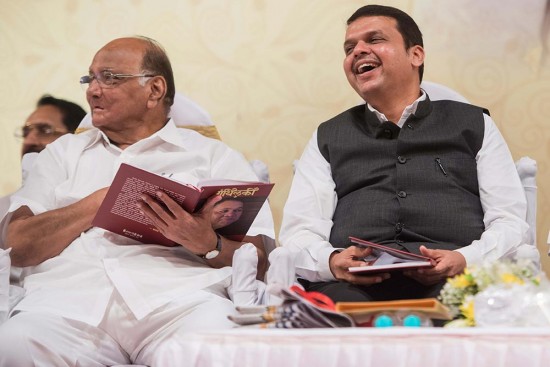 Sharad Pawar, all of 78, has exp­erienced enough rough and tumble of politics to know when the stars are aligned for him; but in his reckoning, this is not such a time. And that is where the pol­itical potboiler in Maharashtra takes a new twist. The BJP’s estranged ally, the Shiv Sena, maybe even open to taking the help of old foes, the Congress and NCP to form a new government in the state but Pawar thinks otherwise. And so the drama continues, with barely a couple of days to go for the term of the assembly to expire.

Though the ruling alliance emerged with the largest numbers, with 161 out of the 288 seats in the recently-concluded elections, the Sena has put the spanner in the BJP’s plans for a quick government formation exercise by insisting on a 50:50 power-sharing formula, which it said was promised by the saffron party president Amit Shah before the polls. The BJP, however, has put its foot down and ref­used to back off. At the root of the Sena’s new-found confidence to take on the big brother is the BJP’s less-than-anticipated performance. So much so that it has even proposed a government without the BJP.

The Sena has stuck to its guns, though the BJP is still hopeful of much-awaited “good news” to break the logjam “anytime now”. The BJP’s hopes soared following the meeting of chief minister Devendra Fadnavis with Rashtriya Swayamsevak Sangh (RSS) chief Mohan Bhagwat in Nagpur and the reluctance expressed by the NCP patriarch Sharad Pawar a day later in joining any new government in view of the people’s mandate in the ass­embly polls. The BJP was forced to turn to its ideological mentor, apparently to seek guidance for ending the deadlock, which has cast a shadow on its ties with its oldest ally in the NDA. On November 5, Fadnavis called on RSS chief Mohan Bhagwat in Nagpur, where he is learnt to have appr­ised the ideologue about the prevailing situation. Bhagwat, according to sources, pressed for early resolution of the deadlock and formation of a coalition government of the two pre-poll allies on similar ideological plain.

The prolonged standoff has brought Maharashtra perilously close to a constitutional crisis. If a new government is not formed by Saturday, according to constitutional experts, governor Bhagat Singh Koshyari may well send his report to the Centre, paving the way for President’s rule in the state. But BJP leaders remain confident that the high-voltage political drama will ultimately culminate into an “all-is-well-that-ends-well” climax.

Senior BJP leader Sudhir Mungantiwar says the government will ultimately be formed by the mahayuti (grand alliance) regardless of what anybody says or thinks. “You cannot separate water, no matter how much you try to. Shiv Sena and BJP are together,” he says. “We should wait... the good news can come anytime.”

Sonia Gandhi held talks with Pawar about the Maharashtra deadlock. Congress is wary of the Shiv Sena as it is close to the BJP ideologically.

But the Sena showed no sign of budging from its stand till Wednesday night. “There has been no change in our stand,” said party spokesman Sanjay Raut. “We will neither send nor receive any new proposal. Everything has to be done as per the understanding mutually agreed upon before the elections.” Accusing the BJP of having reneged on its promise of sharing power equally, Raut reiterated that the rotational formula for the chief minister’s post was part of the pre-poll agreement between the two allies. He also underlined the fact that his party would not be responsible if President’s rule was imposed on Maharashtra at this juncture. “If a conspiracy is being hatched to unne­cessarily impose central rule, it will be an insult to the mandate of the people of Maharashtra, an injustice to Chhatra­pati Shivaji’s Maharashtra and the victory of adharm (unrighteousness),” he told repo­rters in Mumbai.

BJP sources, however, believe that the intervention of the RSS chief and refusal of Pawar to be part of a government may force the Sena to give up its dem­and for the chief ministership and join the government at the end of the day. On Wed­nesday, party leaders were upbeat over the participation of six senior Sena ministers at a meeting convened by Fadnavis. Though the meeting was held to apparently discuss the farm distress in the state, it fuelled speculations that the leaders of both parties had huddled tog­ether to take the stymied talks for government formation forward.

A delegation of senior BJP leaders led by the party’s state president Chandrakant Patil is scheduled to meet the state’s governor on Thursday, a day when Sena chief Uddhav Thackeray has also convened a meeting of the Shiv Sena legislature party. The outcome of these two meetings could determine the future of Maharashtra politics.

The Sena seemed to have explored all options to form a government with the NCP and Congress. Party spokesman Sanjay Raut called on  Pawar and also held talks with Congress MP Hussain Dalwai. But Pawar appeared to have shuttered the Sena’s expectations, reiterating his stand to sit in the Opposition as per the mandate of the people. Pawar said that the BJP and the Sena had been allies for more than 25 years and they should take immediate steps to give the state a new government, instead of pushing it into a constitutional crisis.

The Marartha strongman said if his alliance had the requisite numbers, the NCP and Congress would not have waited for anyone. “The Congress-NCP did not cross the 100 mark … we will work as a responsible Opposition.” He, however, admitted that Raut had shown him a list claiming support of as many as 170 MLAs.  Earlier this week, Pawar met Congress interim president Sonia Gan­dhi in Delhi, where they are understood to have mutually agreed to refrain from fishing in the troubled waters. The NCP and the Cong­ress had won 54 and 44 seats respectively in the alliance, which might have helped the Sena, which has 56 MLAs, form a non-BJP government, but they are said to be wary of the Sena because of its ideolo­gical similarities with the BJP. Several NCP and Congress leaders also want the Sena to walk out of the NDA before trying to garner their support.

A meeting of senior Congress leader Ahmed Patel with Union minister Nitin Gadkari in New Delhi sparked rumours that they had discussed the Mah­ara­shtra situation. Patel, a top aide of Sonia Gan­dhi, however, asserted that he had not even uttered the ‘M’ for Maha­rashtra during his meeting with Gadkari.

Number Crunching Where The Players Stand

145 Number of MLAs required to form the government

56 Shiv Sena MLAs Sticking to the 50:50 formula for power sharing, but everything depends on the outcome of the party’s legislature party meeting scheduled for Thursday

54 NCP MLAs Party supremo Sharad Pawar has reiterated that the Congress-NCP will sit in the Opposition as per the people’s mandate. The BJP-Sena should give the state a new government, he says.

By Giridhar Jha in Mumbai