The rough, the raw and the ribald are eng­agingly portrayed 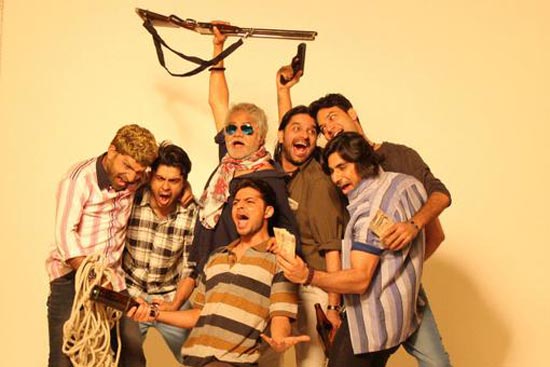 There is a reason why Uttar Pradesh is called ulta pradesh. Everything here has a way of going topsy turvy. Even crime has a habit of going off-the-mark. Meeruthiya Gangsters, despite the stylistic hat tip to Tarantino and familiar gangster film cliches, works mainly because it is so well rooted in West Ulta Pradesh. The acute sense of locale lifts it above banalities; its real feel goes way beyond just getting the ostentatious Noida homes and ubiquitous Jain Shikanji stalls right. Meerut, the next door neighbour of Delhi-NCR, keeps coming into the capital and going back. It comes for work in chartered buses and trains during the week and in cars to infiltrate the malls on Delhi’s fringes on weekends. And it is also the backbone of NCR’s petty crime industry—Noida (nay, Nyodda) and Greater Noida to be specific. The criminals who operate with hockey sticks as well as guns, insisting on golgappa with extra ‘meethi chutney’. It’s a slice of this demograp­hic that is interesting. It’s about lives caught between rural roots and urban aspirations, about going to Nauchandi Ka Mela and to Noida malls for dates, about studying little but hoping to get good jobs. The characters, their clumsy machismo, the blatant swagger, the poker-faced humour and risque one-liners; the rough, the raw and the ribald are eng­agingly portrayed here. And in this patriarchal, uber male world it’s the morally compromised, spunky women who stand out. Women who are called ‘setting’ and ‘piece’ but who have no qualms about eloping with their men, women who might be sidestepped but who will still fight for their share of loot. There are some known and some not-so-well known actors who work as a team to bring the west UP kidnapping and extortion world alive with energy and quirkiness. Each character makes a mark, like the blond Sanjay Foreigner, played by Jatin Sarna.