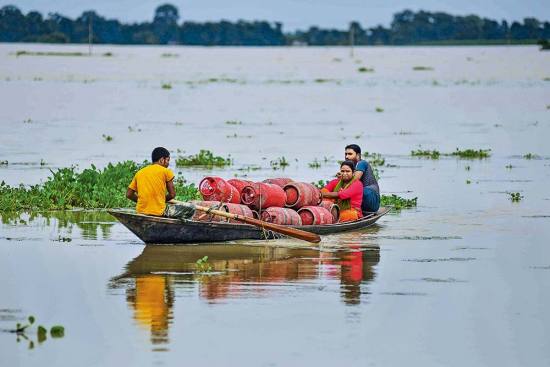 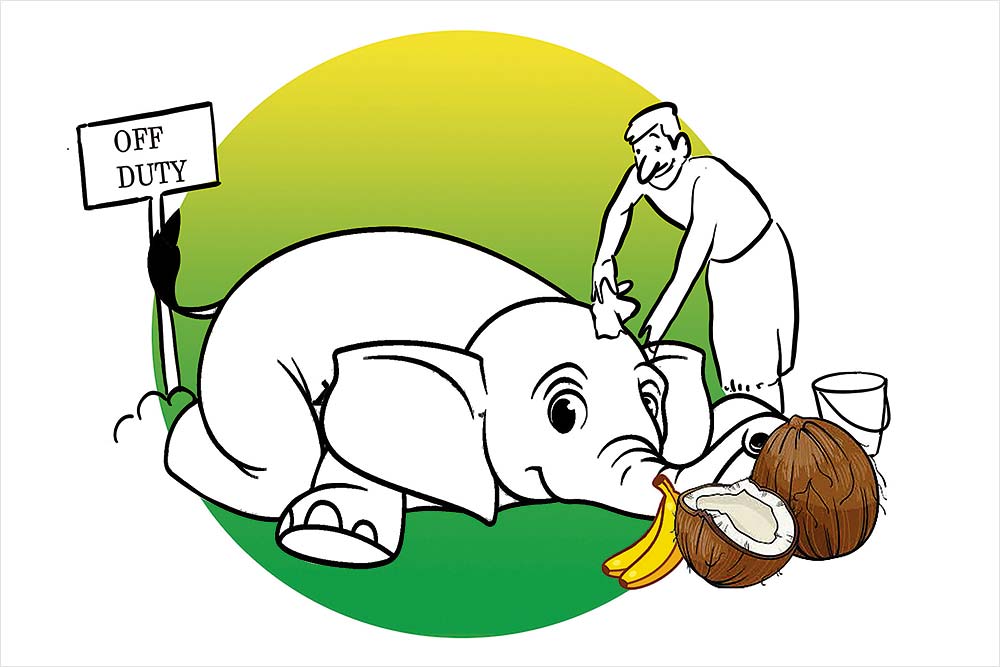 They are ATVs and bulldozers meshed into one giant mass of brute muscle strength—the domesticated draught elephants of Bandhavgarh Tiger Reserve in Madhya Pradesh. There are 14 of them on the park’s roll, and their primary roles are patrolling the 1,536 sq km forest and tracking tigers. This September, they were all given a week-long paid holiday and, oh boy, they just loved it. A rejuvenation camp—Gaj Mahotsav—was held to help them relax and have fun. They were groomed to the point of overindulgence—washed, oil-massaged, daubed with sandalwood powder. Their on-call menu included 10-15 coconuts, four-five kg of apples, five dozen bananas and two kg of molasses for each elephant each day. No one can grudge the good time they had…for all the backbreaking work they do.

Before they get into dissecting the physiology of our species, they must learn about a few icons from history—kind of a crash course that proponents of a new curriculum for medical students in Madhya Pradesh believe will help them understand the values of the Hippocratic Oath in the Indian context. The sage Charaka, doyen of ancient Ayurveda, the guru Sushruta, father of surgery in India, RSS founder K.B. Hedgewar, who was a surgeon, Bharatiya Jana Sangh leader Deen Dayal Upadhyaya, Swami Vivekananda and B.R. Ambedkar are among the greats whose life and work will be taught as part of the foundation course for first-year MBBS students in MP. The move ran afoul of the Opposition, which says the BJP is pressing its agenda. But state education minister Vishwas Sarang justifies the syllabus, saying it will instil social and medical ethics among students studying to be doctors.

When governments and policy pundits are racking their brains to find a solution to unemployment, an independent parliamentarian in Bangladesh came up with one: no two employed persons should marry, Lawmaker Rezaul Karim suggested in Parliament that marriage between working people should be banned and either Mr or Mrs should be allowed to hold a job, not both. This, he said, would free up jobs for the unemployed. “Men with jobs want to marry working women and employed women want to marry service holders. If the trend continues, you can’t resolve the unemployment problem,” Karim said. His proposal was greeted with applause—sniggers and laughter too. Well, he has been known to shoot his mouth. Last year, he blamed feminists for the spike in rape and other crimes against women in his predominantly Muslim nation. Then again, he was seen holding a pistol in his Facebook profile picture. 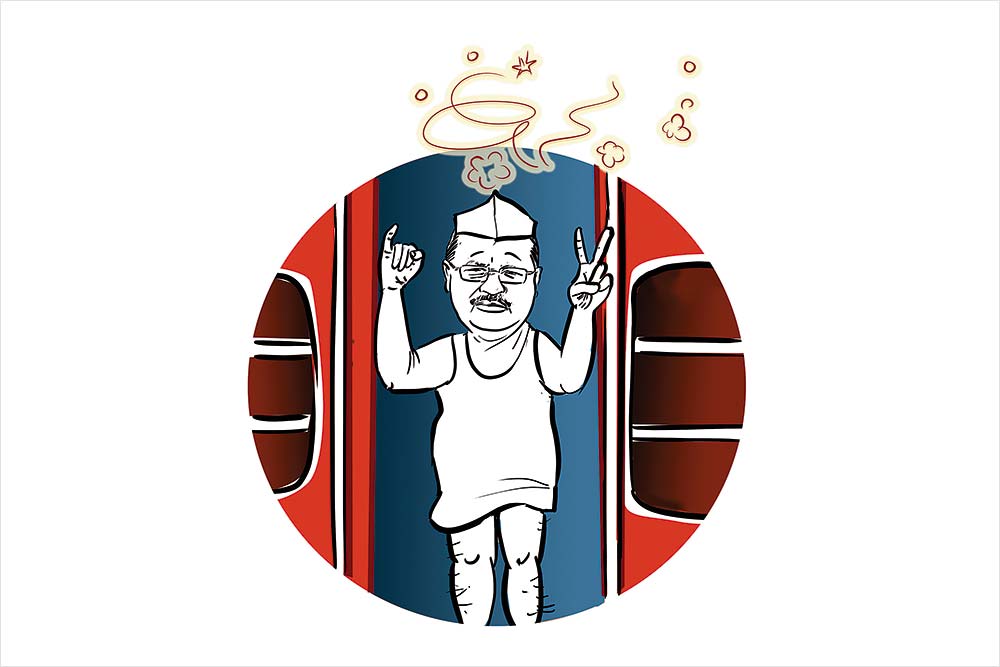 Imagine: nature calls on a fast-moving Rajdhani train and demands immediate action. The very thought can tighten the collective sphincter of a nation that has travelled on trains far less privileged. Now, bowel movement presses upon a middle-aged man with a paunch and crew cut when he boarded the train in Patna. He took off his kurta and pajama, staggered in his vest and underpants to the loo, swaying left and right as he tried to keep his balance. One slight problem: the man is Gopal Mandal, the JD(U) MLA from Bhagalpur district in Bihar. Fellow passengers found his sartorial sense offensive and a man accosted him for being “half-naked” on a coach full of families. The legislator and his lackeys allegedly attacked the man and hurled caste abuses at him. A case has been filed against the MLA since. The Bihar chief minister’s take on this: “Yeh sab toh hota hi rahta hai (Such things keep happening).” Well, of course, we heard that before—“Bade bade deshon mein aisi choti choti baatein hoti rehti hain (Such small things keep happening in big countries).” 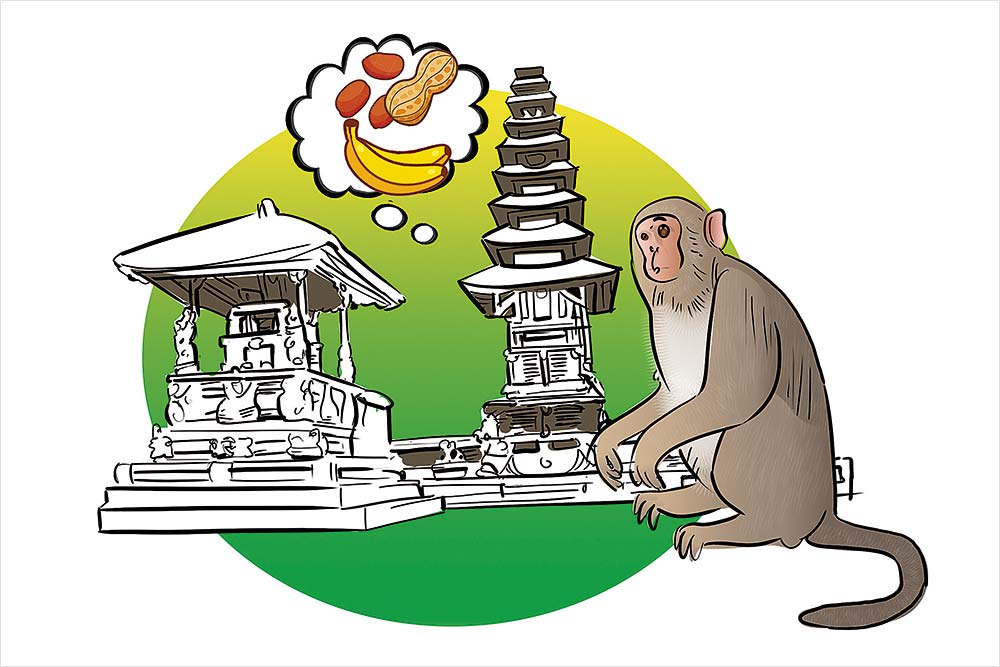 Deprived of their preferred food source—the bananas, peanuts and other goodies brought in by tourists now kept away by the coronavirus—hungry monkeys on the resort island of Bali have taken to raiding villagers’ homes in their search for something tasty. Villagers say the gray long-tailed macaques have been venturing out from a sanctuary to hang out on their roofs and await the right time to swoop down and snatch a snack. Worried that the sporadic sorties will escalate into an all-out monkey assault on the village, residents have been taking fruit, peanuts and other food to the Sangeh Monkey Forest to try to placate the primates. About 600 of the macaques live in the forest sanctuary, swinging from the tall nutmeg trees and leaping about the famous Pura Bukit Sari temple, and are considered sacred.