The ruling Congress fights charges both religious and temporal in Mizoram 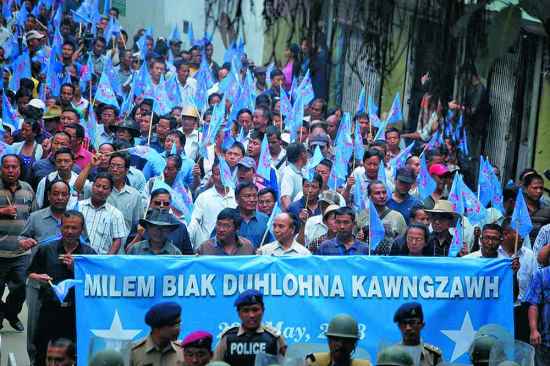 Election season in Mizoram has had one riveting controversy that has whipped up mass interest. It concerns the Hindu ‘tilak’ that has been the generating news in the last stage of the campaign in this predominantly Christian state. Posters featuring the ruling Congress CM Po Lalthanhawla with a tilak, supposedly from his visit to a puja pandal in Calcutta in 2011, have been widely circulated by opposition parties to extract maximum mileage. Rallies have also been organised to argue how the CM violated key Christian tenets.

The CM, on his part, hasn’t taken it lying down, even arguing that pastors from Mizoram have had the tilak applied on them on outstation visits. This only infuriated the Church, that rushed to defend the piety of its pastors. In a state where the Pres­byterian and Baptist churches are powerful, many believe this controversy can harm the Congress’s poll prospects in conservative rural areas. So powerful is the Church that it has ‘banned’ football on Sundays and runs a self-appointed and strict election monitor—Mizoram People’s Forum (MPF). The Election Commission even chose to change the original date of the poll from December 4 to November 25 as it clashed with the Presbyterian church’s conference.