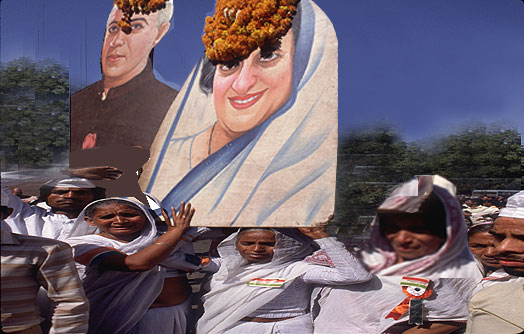 In parts of rural India, even today, people fast on the death anniversaries of three figures from recent history, points out historian Bipan Chandra—Mahatma Gandhi, Bhagat Singh and, yes, Indira Gandhi. In remote villages among the lush coffee estates of Chikmagalur, says Congress functionary B.K. Hariprasad, Indira Amma finds pride of place among the deities worshipped at home. And Union minister Kamal Nath and senior party leader Ajit Jogi still seek votes in the name of Indira Gandhi in the wilds of Madhya Pradesh and Chhattisgarh.

V.S. Naipaul may have dismissed the Indira era in India: A Wounded Civilisation (1977) as years of drift and aimlessness and written scathingly of “the simplicity of a country ruled by slogans”. And well-known journalist B.G. Verghese, who was her media advisor (1966-69), does say, “Indira Gandhi spoke in the name of the poor, but most of her welfare programmes were just a tactical ploy to outmanoeuvre her rivals.” But he also admits that she had “the vocabulary and capacity to bring out rural women at public meetings, unlike Nehru. She would go to their homes, into their kitchens. She created a political consciousness and democratised politics”. And over the last year, her role in bank nationalisation has come in for fresh recognition. “India would have been ruined,” stresses Bipan Chandra, “after last year’s economic meltdown but for bank nationalisation.”