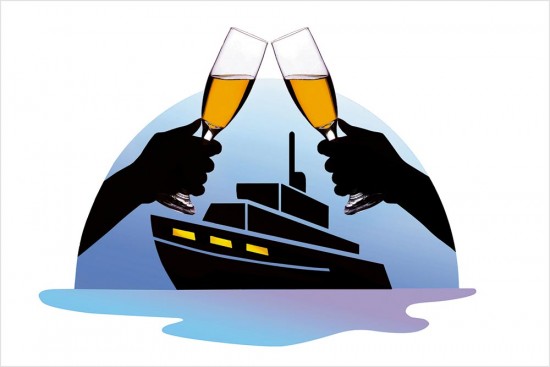 Mykonos wakes up at sunset. At 3 am, there are traffic snarls to get to Little Venice in the old town, where waves—turquoise in the day, now inky blue—lap against the pavement, wetting our feet, making the toes sticky with salt. (Oh, that indescribable shade of the Aegean Sea. Here is Nikos Kazantzakis in Zorba The Greek, far more eloquent: The sea, autumn mildness, islands bathed in light, fine rain spreading a diaphanous veil over the immortal nakedness of Greece. Happy is the man, I thought, who, before dying has the good fortune to sail the Aegean Sea). There are people all around, beautiful people. Chiselled, sinewy men in boxer shorts. Olive-smooth, sylph-like women in bikinis. As the labyrinthine lanes—with tufts of oleander and bougainvillea spilling out of courtyards—wind their way through discos, restaurants and designer stores, bursts of music and the aroma of fish on grills waft across. In this flow of people, any little oasis like a shop front or a bar porch is an impromptu dance floor. Mykonos does party all night. One morning, we wake up to see the sunrise. Soon after, there are brilliant fireworks in the sky. We ask later if it was some festival. No, it would have been a nightclub closing for the day with fanfare.

We are at Sea Satin, the traditional Greek restaurant famed for its lobsters and crabs, at the edge of the old town, with the water on one side and ancient windmills on the other. Till about midnight, it’s like a regular busy restaurant—long wooden tables laden with crisp golden-brown whole sea bass, sparkling wine glasses and salads in heaps. Then something snaps. The DJ plays the first strains of the theme song of Zorba the Greek, the Anthony Quinn film adaption of the book which immortalised these Cycladic islands, and half the people on the opposite table are on their feet. As the tempo of the infectious tune rises, two girls climb onto their chairs. Then more of them. Somebody clears the wine glasses from the table and now two of them are on it, jiving in rhythm to the song. In a flash, almost everyone is either on their chairs or on the tables, swinging the white table napkins in a frenzy, swaying with the sparklers the ushers have passed on. One Greek song after the other follows, everyone sings along. Amazingly, not a glass breaks, not a plate falls. It’s a sight to behold: everything is in motion, the waves lash outside the windows, bodies sway in tandem to the music, waiters move about refilling the glasses and placing the dishes carefully between dancing feet. When we totter out to the gates around three in the morning, there are guests waiting to come in.